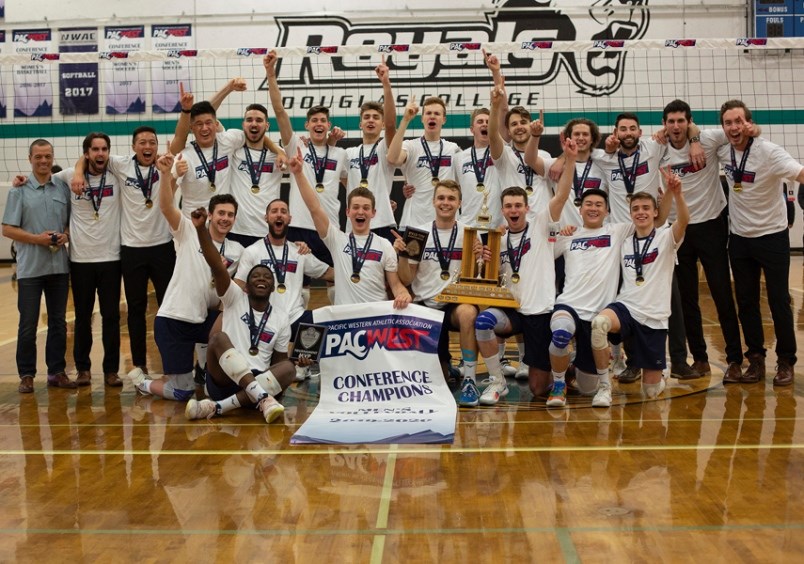 The Capilano Blues celebrate their win over Camosun in the 2019-2020 PacWest men's volleyball final in February 2020 at Douglas College. Capilano head coach Dave Dooley, second from left in the photo, is leaving the program. | Capilano University

Men’s volleyball coach Dave Dooley and men’s basketball coach Cassidy Kannemeyer are both leaving the Capilano program, it was revealed this week.

Pandemic cancellations aside, Dooley is leaving the Blues on a very high note. His last official game as head coach was the 2020 national championship match, which his Blues won 3-0 over the Humber Hawks in an empty arena in Fredericton, N.B.

It was one of the final major sporting events played in Canada before COVID-19 concerns shut everything down for several months. Dooley’s Blues will stay as the reigning champs for a while now, as no league games were played for the 2020-21 season and there will be no championship tournament. It was the first-ever national title for the Blues men in volleyball.

"It has been a pleasure being part of the Blues program for the past three seasons,” Dooley stated in a release from Capilano. “I want to thank the Blues athletics department, my coaching staff, and especially the student-athletes for all of their hard work both on and off the court. In my short time with the program we had some incredible success, and I look forward to seeing how the lessons learned on the court will manifest in these young men as they transition to becoming contributing members of the volleyball community, workplace, and society in general."

Dooley, a Surrey native, indicated that he will now focus his attention on his young family and his job as an educator in the Surrey school district.

Kannemeyer, meanwhile, announced last week that he is leaving Capilano to become a lead assistant coach for the men’s basketball team at the University of the Fraser Valley. The Cascades, under head coach Joe Enevoldson, play in the U Sports Canada West conference, one step up from Capilano’s PacWest conference in the CCAA.

Kannemeyer led the Blues to the PacWest final in 2017, earning silver to give the Blues their first provincial medal since 2011.