'We are all brothers': Touching tribute attached to surreal championship win
Mar 16, 2020 5:44 PM By: Andy Prest 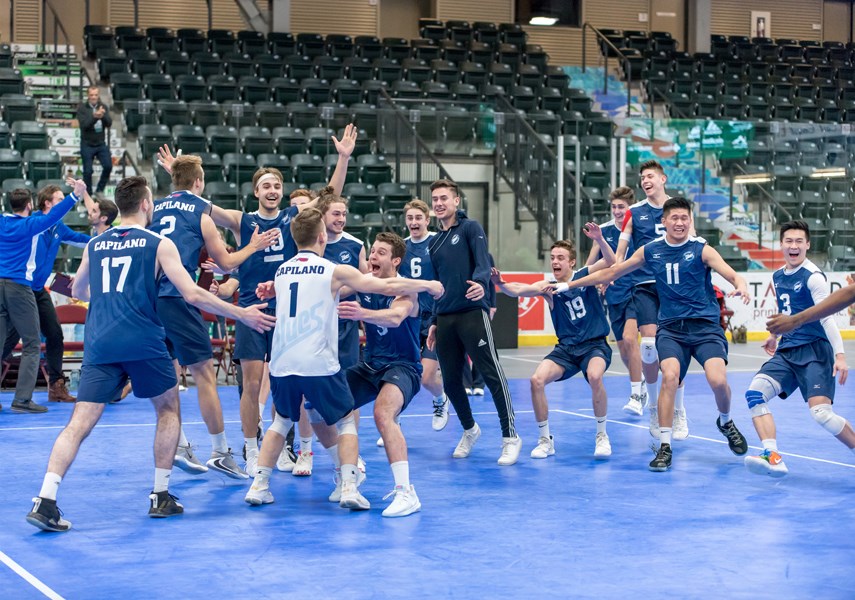 Members of the Capilano Blues men's volleyball team celebrate a national championship win in front of an empty stadium Saturday in Fredericton. The tournament was played without any fans due to coronavirus concerns. photo SRMPhotography.ca

There was no roar of the fans, but the jubilation was in no way muted as the Capilano Blues men’s volleyball team claimed their first ever CCAA national title in front of an empty stadium Saturday.

In what will go down as one of the last major sporting events in Canada before coronavirus concerns shut down leagues around the world, the Blues topped the Humber Hawks 3-0 in a national final played in the empty Grant-Harvey Centre in Fredericton, N.B.

“I’m on top of the world,” Capilano head coach Dave Dooley told the North Shore News. “It’s a long time coming, a lot of hard work for these guys. They’ve put in so much time, so much effort both on and off the court. It’s just one of those things that verifies all that hard work. It feels amazing.”

The tournament, which began last Thursday as reality was setting in about a global pandemic, was very nearly called off. But the decision was ultimately made to allow the teams – which had travelled to New Brunswick from across the country – to play the tournament but with no fans in attendance.

“We walked into the [opening] match thinking our parents would be there, but they weren’t allowed,” said Dooley. “We had parents fly in from Australia, obviously lots from Vancouver. They had to watch from the hotel. … At the end of the day we were very thankful that the tournament wasn’t cancelled, which was a serious risk for sure.”

The Blues opened the tournament with a comfortable 3-0 quarterfinal win over Ontario’s Durham College Lords, setting up a semifinal against Red Deer College, consistently one of the powerhouse programs in the nation. The Blues fell behind 2-1 against the Alberta champs, but battled back to take the final two sets and earn a berth in the final. Performing under pressure became the hallmark of this Blues team as they claimed the PacWest provincial title and went on to more success at nationals, said Dooley.

“Going back to our provincial championships, we faced five elimination sets – if we would have lost any one of those five sets, our season would have been over,” he said. “Against Red Deer we faced two more, so this season we faced seven sets that if we would have lost, our season would have been over. … That stat – seven wins and zero losses when facing an elimination set – I think that’s got to be some kind of record. I’ve got to look into it, I don’t even know if we keep stats like that. To me that just shows you two things. Obviously perseverance – not giving up. And then the second thing is just the belief. I think that would be the word for me – the belief that these guys have in one another, in themselves and in our coaching staff. You don’t win those seven sets without believing.”

Capilano clinched the semifinal match with a 15-13 win in the fifth set on a block from Rafael Hilario, setting off a very surreal celebration.

“In the game, in the moment you are so focused on the court and the players and your opponents that you don’t even notice it,” Dolley said about playing in an empty stadium. “I didn’t notice it at all, and then the game is over and we’re all celebrating and going crazy and you turn around and look to see bleachers completely empty. It was very odd.”

In the final the Blues showed their strength, overpowering a Humber team that had dominated the Ontario league, losing only two sets all season. The last time Humber dropped a set in the Ontario league was back in November.

“They had a perfect season going, but I think for us that really worked to our advantage,” said Dooley. “We’ve been under pressure all year long, we knew how to play with it. And Humber clearly hadn’t seen any pressure since November, really. Durham College was the second best team in Ontario, and we handled them pretty easily. Whereas our top four teams in PacWest are very strong, and the conference really helped to prepare us for the biggest stage in the national championship.”

“The best moments were back in the locker room with the team and back at the hotel with the family and sharing that celebration with everybody,” said Dooley.

Tournament MVP honours went to fifth-year setter Simon Friesen, a perfect finish to an immaculate career that included a national player of the year award but no provincial or national titles until this season.

“He was fantastic,” said Dooley. “[He] distributed the ball to everybody and kept everybody involved in the offence. We would have been a very difficult team for anybody to prepare for, and I think a lot of that is Simon and the offence that he sets.”

Three of the big bashers on the ends of those sets also earned honours, with Hilario and Ben Friesen, Simon’s twin brother, earning first-team all-star awards at the tournament and Jacob Hopkins getting a spot on the second all-star team.

“They were all great, they were all consistent, and not just in offence,” said Dooley. “There was unbelievable [service] reception from Raf and Ben and our libero, Markus Bratsberg – he’s from Argyle Secondary, a North Van local guy. … Obviously for Simon to be able to set all these guys in good situations, we had to be able to pass the ball.”

It was a particular point of pride for the players to become the first ever Capilano men’s volleyball team to win a national title, in the process becoming the 15th Capilano team to claim gold at a CCAA championships.

“This is more than just a team,” said Dooley. “We have a whole extended team – the athletics department, professors at Capilano … this is for our school, it’s for our university. We’re very privileged to be able to bring that banner, that trophy back to our school. Being able to hang that rafter in the banners for the first time is going to be an unbelievable moment for us.”

The word “brotherhood” was written on the back of the jerseys for the Blues, a message that ultimately went far beyond the usual bonds formed by a championship team. For one thing, the Blues were powered by a dynamic set of twins in Simon and Ben Friesen, who united for one final college season after spending four years apart.

The connection ran even deeper for Dooley, whose younger brother Patrick Dooley died of a sudden illness 12 years ago when he was in high school.

“My last match with Camosun College [as an assistant coach] was five years ago in 2015 and we won the national championship,” said Dooley. “That was on March 14. And this time around, same date, March 14, we win this national championship, the first one for Capilano University, on the same date. And March 14 happens to be my brother’s birthday. He was looking down on us for sure.”

Brotherhood was a belief that the Blues carried with them all season, said Dooley.

“We talked about that belief and that love,” he said. “We’re all brothers on the team.”