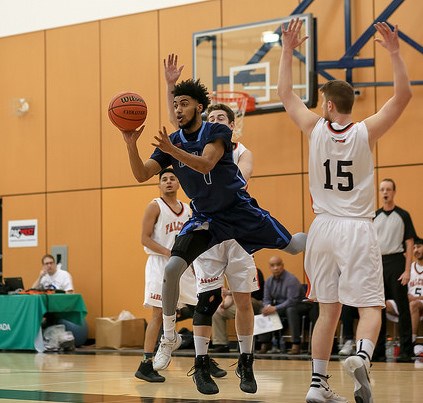 The Capilano University men's basketball team saw a valiant title run end one step of their ultimate goal as they battled all the way to the PacWest championship final Saturday in Squamish before finally running out of gas.

Capilano took on Vancouver Island University in the final at Quest University, going to-to-toe with the top-ranked team in the province for the first half before falling behind in the second. The Mariners, ranked fourth in the country, sailed away down the stretch for a 94-77 win to claim the PacWest title and earn a spot at the CCAA national championships. For the Blues men it was the first provincial medal since a bronze in 2011, and the first time they’d competed in the final since 2004.

“A silver medal is a great accomplishment for the athletic department, for the men’s basketball program,” said head coach Cassidy Kannemeyer. “It’s bittersweet. It’s a great accomplishment. I think if you asked our guys what their goal was, their goal was to make nationals. My goal as a coach was to be the hardest working team in the league. I thought in the playoffs we were almost there.”

The Blues men, who finished third in regular season play, faced a tough road at provincials having to win three games in three nights to take the title (the two top-ranked teams get a bye into the semifinals). Capilano started the tournament with a grinding 76-69 win over sixth-ranked Camosun, getting a big game from guard Hassan Phills who shot 7/13 from the field and 6/8 from the free throw line for 23 points.

That win earned the Blues a semifinal date with second-seeded Langara and Capilano came through again, slowing down the high-flying Falcons to claim a 68-63 win. Phills again led the way with 15 points and eight rebounds while Greet Gill, who earlier in the week was named a PacWest regular season first-team all-star, scored a double-double with 11 points and 12 rebounds while adding a block and three steals.

The back-to-back wins earned the Blues a spot in the final but also took a lot out of the team, said Kannemeyer.

In the final the Blues and Mariners were tied 40-40 at the half but it all fell apart for Capilano in the third frame as VIU got hot and the Blues did not. The Mariners outscored the Blues 32-16 in the quarter to open up an insurmountable lead.

“We had a really amazing first half against VIU but in the end they were just better in the second half,” said Kannemeyer. “I think we lost a bit of our legs, lost a bit of our focus and that’s why they’re going to nationals and we’re not.”

Tired legs translated to poor shooting for the Blues who were just 6/32 from behind the three-point line in the game. VIU was led by league MVP Usama Zaid who scored 24 points with seven rebounds, three assists, a block and two steals.

“In their big stretch where they put the nail in the coffin in the third quarter … their role players hit three-point shots and ours didn’t,” said Kannemeyer. “We didn’t have a good shooting night. You’ve got to shoot the ball well.”

Gill and Phills, who were both named tournament all-stars, again led the way for the Blues in the final, with Gill scoring 22 points with eight rebounds and Phills dropping 21 points with four rebounds.

Gill, an Osoyoos native who transferred from UBC Okanagan to Capilano this season, was the team’s cornerstone all year, finishing the season fourth in the league in scoring, second in rebounding and fourth in assists. Phills was a late-season revelation, coming off the bench in all three playoff games and adding a much-needed scoring boost.

“His whole career he’s been pretty much a defensive specialist and energy guy, and this year we not only got the defensive specialist and energy guy, but then we got 10 or 11 points a game,” said Kannemyer. “It was huge. Down the stretch he was probably averaging 16 points per game and really emerged as our second scorer. … A lot of credit to Hassan for stepping up, a lot of credit to his mindset for being aggressive and listening to the coaching.”

“He’s an amazing transition player, one of the fastest players in the league with the ball in his hands,” said Kannemyer, adding that if Untalan adds consistency to his jump shot he could be a force in the league. “I think if he can figure that out he can be a second- or first-team all-star.”

Other players who chipped in during the playoff run include Chris Loreth, who had a monster stretch of eight straight points against Langara; Handsworth grad Mo Karimirad, whose three-point shooting was crucial in the first two games; and steady two-way players Malik Holmes, Jesse Mushiana, and EJ Mabone.

“We had contributions in that tournament from everybody who played,” said Kannemeyer. “It was a rollercoaster in the regular season but in the end we came together and played our best basketball in the playoffs.”