The Capilano Blues are the PacWest men’s volleyball gold medalists, headed to the national championships after scoring a stunning come-from-behind win in the provincial final.
Feb 24, 2020 10:57 AM By: Andy Prest 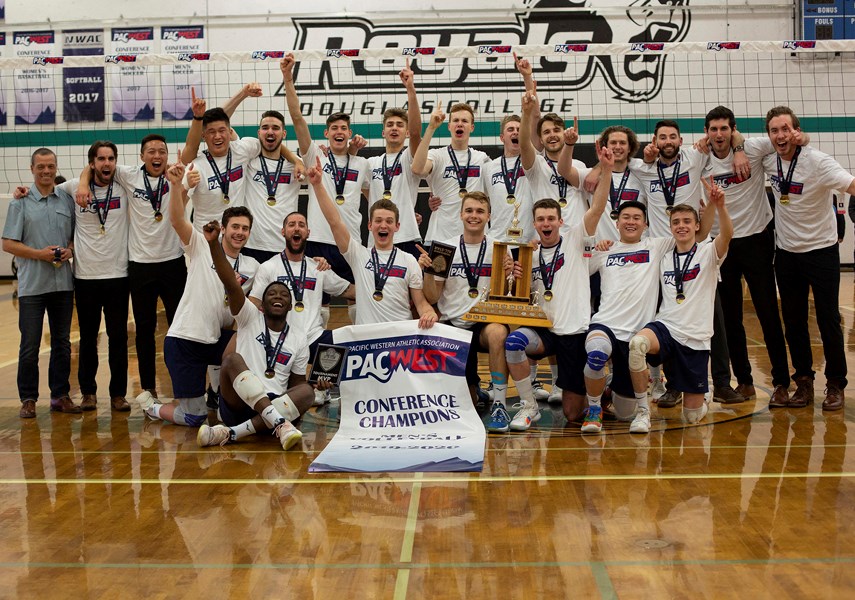 The Capilano Blues celebrate their win over Camosun in the PacWest men's volleyball final Saturday at Douglas College. photo Capilano

The Capilano Blues are the PacWest men’s volleyball gold medalists, headed to the national championships after scoring a stunning come-from-behind win in the provincial final.

In the PacWest gold medal game, played Saturday at Douglas College against Victoria’s Camosun College, the Blues fell behind two sets to zero and faced down two match points in a wild third set before roaring all the way back to claim the provincial title 24-26, 18-25, 31-29, 25-21, 15-8.

“It’s really amazing, just the amount of work the guys have put in as well as how much our belief was tested in that game,” said head coach Dave Dooley. “The belief never faltered. … We knew it was possible, we still had the belief, but for the provincial championship it was quite a tall order, and keeping the guys believing was the main goal within the coaching staff.”

Capilano came into the tournament as the third-seeded team and proceeded to knock off sixth-ranked UFV 3-0 in the quarterfinals before being pushed to the limit in the semifinals against second-seeded Vancouver Island University, scoring a five-set win 23-25, 25-17, 18-25, 25-19, 17-15. On the other side of the draw fourth-ranked Camosun beat fifth-seeded College of the Rockies 3-1 in the quarterfinals before scoring a stunning 3-2 win over the host Douglas College Royals, the tournament’s No. 1 seed and the third-ranked team in Canada.

In the final Capilano appeared poised to take an early lead in the match but stalled late in the first set. The Blues led 24-23 and were serving for the set, but Camosun ran off three straight points to claim the crucial opener.

“We started out really well, had a big lead, and they just kind of started chipping away at our lead, and at the end of the set they really stole it from us,” said Dooley. “I thought it was ours to win and we did all the work but then we just tightened up a bit when things got close and they took over. It was tough to lose that one for sure.”

Camosun then grabbed a comfortable win in the second set to push the Blues to the brink. Down 0-2, Capilano faced a massive challenge to claim the title. The third set was tight, with Camosun earning a pair of match points as the Blues fought for their lives.

“It was crazy,” said Dooley. “At one point we gave them a free ball on match point – it was really in their control offensively, they could have ended the game right there. But we stayed calm, we stayed within our systems and eventually made the dig and scored in transition and then stole it in the end, 31-29. And that’s when you really felt the momentum start to shift and the belief solidify.”

There were, however, still obstacles to overcome. In the fourth set starting outside hitter Jacob Hopkins tweaked his ankle.

“That was when I started to worry,” said Dooley. “One of our starting hitters, one of our stars, had to come out.”

The injury forced rookie hitter Dimitrije Djordjevic into action for the first time in the tournament. The Serbian import hadn’t even dressed for the quarterfinals or semifinals due to an injury, and his first touches of the tournament came with everything on the line.

“He could have been so nervous not having played a point in the whole championship, but he came up with some massive swings for us, a big block for us, and eventually kept us close enough to steal it at the end,” said Dooley.

In the fifth set the Blues finally pulled away, with outside hitter Rafael Hilario, named tournament MVP, clinching the title by winning a joust at the net on match point.

The @CapilanoBlues Blues do the improbable and complete the comeback coming from 2-0 down and defeat the @CamosunChargers in 5 sets to win the @pacwestbc Provincial Championship!

“There was no losing that [set],” said Dooley. “We just kind of jumped on Raf’s back and let him go to town. He was unbelievable in that set.”

Hilario, a Brazilian who transferred to Capilano from Ontario’s Humber College for this season, really set the tone for Capilano’s comeback, said Dooley.

“In key situations, he was the guy we were setting the ball to for sure. If you just look at the match and the symbolism of going down 0-2 but remaining calm and facing two match points and keeping the belief, I think that stems from Rafael’s offensive leadership and his overall demeanour on the court. He’s one who doesn’t get too crazy or up and excited and you could see that he never stopped believing. That leadership really led to amazing things for us.”

Both setter Simon Friesen and hitter Ben Friesen, twin brothers who united this season for their fifth and final years of eligibility, were named to the tournament all-star team. It was a fitting career cap for Simon, who has played his entire career at Capilano, earning several honours, including national player of the year in his third season, but had never won a title or been to nationals before now.

“He started his first year at Capilano when times were a little darker and they didn’t have many chances to win something like this, and for him to persevere through a five-year career and win it in that way was unbelievable,” said Dooley. “I couldn’t be more proud of Simon and all the guys. They’ve really earned it.”

Ben, meanwhile, was on the receiving end of many of Simon’s sets and did important damage as a hitter.

“Ben had two swings on match point to score for us and keep the match alive,” said Dooley. “Just so clutch. Awesome.”

This was Capilano’s first men’s volleyball PacWest title since 2013. The Blues will head to St. Thomas University in Fredericton, N.B, for the CCAA national championships March 11-14. Dooley said his team will be a top contender at nationals having come out of the loaded PacWest conference.

“We’ve had so many battles all year long, incredible battles with really high-level teams. We should be prepared for nationals, we should be able to perform on that stage because we’ve been performing on a similar stage all year long.”