STA grad Michael O'Flynn still feels grateful for opportunities given to him during COVID-19 season at Acadia University
May 9, 2021 1:02 PM By: Andy Prest 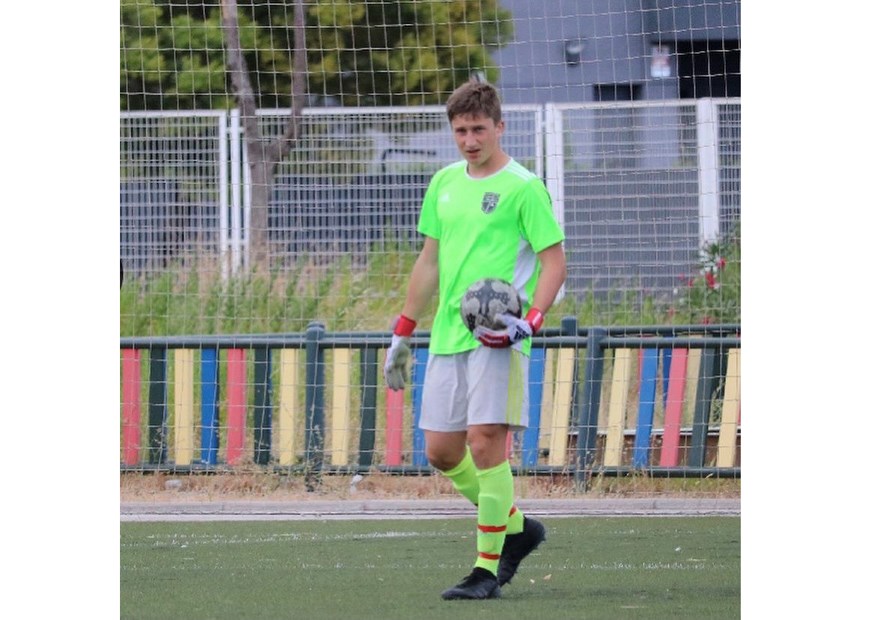 North Vancouver goalkeeper Michael O'Flynn played one official game in his rookie year with the Acadia Axemen due to COVID-19 concerns. supplied by Michael O'Flynn

North Vancouver soccer goalkeeper Michael O’Flynn counts himself lucky amongst athletes who made the jump to post-secondary athletics during the COVID-disrupted 2020-21 season.

He got to play one game.

Well, technically he only played half the game as part of a goalkeeping tandem, although he did get to stay in there as the tied game went to a shootout. He then made three straight saves in the shootout as his Acadia Axemen beat the Dalhousie Tigers in an exhibition game last fall.

“I’ll take that debut,” he said with a laugh.

But that was it, as far as official competition goes. Such is life for many talented young athletes who made the jump to post-secondary athletics during the COVID-19 era. Many didn’t even get to play a single game, so that’s one reason why O'Flynn considers himself lucky. He still, however, had a very strange debut season at the college level, when compared to every other year prior to 2020.

The process started in a typical manner for the St. Thomas Aquinas Secondary grad. O’Flynn was scouted by the Acadia coaching staff when he was playing in a national championship tournament in P.E.I. with his Mountain United club in 2019, and committed to the Nova Scotia university in November of 2019, pre-pandemic.

When COVID hit in March, he, like many, thought it would all be over in a few weeks, maybe a month or two. But of course it didn’t go away, and as spring turned to summer, O’Flynn naturally began to question whether or not he should fly all the way across Canada and settle in to a new province in the middle of a pandemic.

“As the months went on, you got a little more worried, like are you going to go or not?” he said.

As the start of fall term approached and the COVID situation in Nova Scotia began to look brighter, O’Flynn made his decision.

“As a varsity athlete, I felt like it was my duty to go,” he said. “I knew they'd be practising a little bit, so that gave me a good opportunity to meet people. … I definitely contemplated not going, but definitely glad I did choose to go.”

When he arrived, however, he and his classmates experienced a college orientation like no other: strict isolation, for two straight weeks.

“I was sent straight to my dorm room,” said O’Flynn. “I had all my boxes there, so I guess it was a good two weeks to make everything look nice. It was a lot of alone time. I made the mistake of not bringing my PS4. It was just YouTube videos all day.”

The students couldn’t even leave their rooms to go get food – three meals a day were brought to them in their dorms. It was tough for an active athlete, accustomed to taking part in training sessions nearly every day, to sit locked in a room for two straight weeks. O’Flynn improvised to keep his fitness up.

“I was doing these random boxing routines I found on YouTube,” he said. “Whatever I could do to get sweating. I’d put two hoodies on, just to get that sweat out.”

“It was probably the best feeling in the world,” he said with a laugh. “Two weeks by yourself is not fun. I got to get out, go for a run, start to meet everyone. It was definitely relieving. You’re just counting down the days when you're in isolation.”

The year that followed was an odd one by normal standards, but O’Flynn said he appreciates the things he did get to do. The Acadia soccer team started training a few times a week, first in cohorts and then as a full group. And, of course, they played that one real game against their rivals from Dalhousie.

Winter soon hit the Maritimes and there were no more chances to play official outdoor games, but the Axemen were able to play some indoor small-sided games against other Nova Scotia schools during the second term. They played about a dozen seven vs. seven games, and then that was it. Season over.

O’Flynn said he’s grateful he got to play at all in these strange times.

“That was the best you could ask for,” he said. “I mean, it’s better than just sitting at home, no practices, nothing going on. … Of course it’s not what you’d expect. You want to have a season, you want to make a run at playoffs, all that stuff. But I’m thankful for the opportunities I did get to have when I was there, because I know a lot of people aren’t getting those.”

Many of his soccer friends who went to school in other parts of Canada and beyond didn’t get the same opportunities this year as he did, said O’Flynn.

“I was happy with the way I could actually play,” he said. “I know a lot of my friends who went to other schools barely got to train. … In a time like COVID, I guess you tend to appreciate the opportunities you do get because, you know, there's not too many.”

It was, however, still a very weird year. Even though he flew all the way across the country, all of O’Flynn’s classes were conducted online. He’s studying kinesiology with the aim of becoming a physiotherapist.

“It was tough,” he said. “It’s definitely a little harder to learn online – there are a lot more distractions on you just sitting in your dorm room. I wish I could have gone in person. But by the sounds of it, Acadia is looking to have in-person classes by next year. So I'm excited for that.”

And the soccer? O’Flynn is counting on adding game No. 2 to his stats page soon, and many more after.

“Atlantic Canada has done such a good job with containing COVID,” he said. “I'm expecting a season, hopefully, next year.”

The "Playing Through" series looks at high-level North Shore athletes navigating the jump from high school to the post-secondary level during the COVID-19 era. Check out the links below for more athlete profiles.

Playing through: Argyle's Gabbie Francis ready to take her shot with Carleton Ravens
May 2, 2021 2:58 PM