First of a series of articles examining the challenges faced by North Shore athletes trying to play through a pandemic
Apr 17, 2021 3:00 PM By: Andy Prest 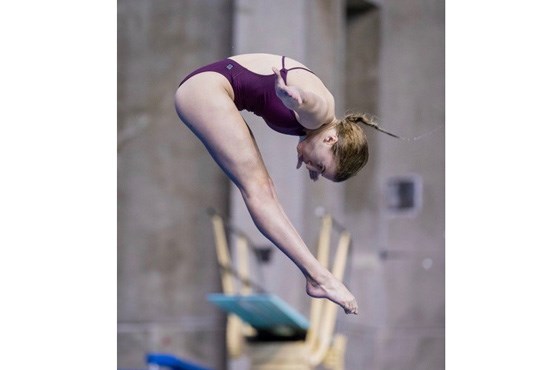 North Vancouver's Sadie Howard performs an inward dive pike (401B) on the one-metre board at the 2017 nationals in Montreal. supplied by Sadie Howard

In the spring of 2020, North Vancouver elite diver Sadie Howard was just weeks away from finishing the daunting and demanding process of committing to an NCAA university program.

The Handsworth student, then in Grade 11, had already been grinding through the process for a year. In Grade 10 she started contacting coaches at a number of Ivy League colleges, researching the schools, the diving programs, the student life. She made one official recruiting visit to Princeton in the fall of 2019 and had several more lined up for April of 2020. The visits were the key – which campus, coaching staff and team would wow her the most, and which school would offer that scholarship she was looking for. It was a year’s worth of work – built on top of a decade’s worth of intense diving training – and it was finally coming to an exciting end. And then. …

“All of a sudden COVID hit, so no one really knew what to do,” says Howard. “That’s kind of when it started to get all weird.”

Campuses shut down and the border closed. She couldn’t travel to the U.S. to take the standardized tests needed to get into an NCAA school either. Instead of finishing off her jump to the college level with a perfect entry, she was thrown way off course mid-flight.

“It was just not working out with COVID,” she says. “And I think being an international student made it even harder because there were students in the States taking these tests and verbally committing to schools and not really having a big issue. But for me, it seemed a lot harder.”

As weeks turned to months, the process stayed at a standstill.

“You notice people, like in the States, all around you announcing their commitments,” she says. “And there was nothing I could do. And even all the coaches were kind of like, ‘Yeah, I don't know.’ I wasn't really getting an answer. … I found there was a lot of confusion going on.” Realizing that no one had a game plan for international college recruiting in a pandemic, she set about building one for herself.

“I was relying on going on those visits and actually seeing the schools,” she says. “So that's why when COVID hit I was like, ‘Oh, my gosh, I need to do all this research on my own, because I can't just rely on visiting the schools anymore.’”

She had Zoom meetings with coaches, but she knew she wanted a lot more information about the schools before making a choice. A coach couldn’t really tell you what life is like in the dorms, what the learning environment is like, or how the food in the cafeteria tastes. And so she did a deep dive of her own, connecting with current athletes in the programs through Instagram to get a feel for the schools.

As she went through the process, it was the University of Pennsylvania that won her over. The athletes in the program were supportive when she reached out, and the diving team’s coaches were the quickest to help Howard build a pathway to get her across the border and onto an NCAA team. It quickly became clear, however, that the pandemic had slammed the window shut on scholarship opportunities for the fall of 2021. But the Penn staff came up with the idea of Howard taking a gap year to train in Canada and committing to their program for the fall of 2022.

And so, in February of 2021 – two years after she started the process and almost a year after she expected to finish it – Howard finally landed the NCAA spot she’d been chasing for so long. It was exciting to finally make the commitment, but also exasperating to have a global crisis intervene at such an important stage in her competitive career.

“It didn’t go as I planned,” she says. “I was not expecting to take a gap year. That was all because of COVID. … None of this went to plan.”

And while navigating all this, Howard has been trying to improve her diving skills despite a complete shutdown of team activities for nearly half a year last spring and summer, as well as a full year without an actual competition to take part in.

Now more than a year into COVID, Howard says she feels relatively lucky as a member of a small team, competing in an individual sport. It hasn’t exactly been business as usual for the past seven months, but the iDive team has been able to do almost all of the training they normally would do, she says, adding that it’s been odd, but not too disruptive, to go for a year without competitions.

“It’s been weird, but honestly, I don’t mind,” she says. “I don’t think it un-motivates me. Verbally committing to a school and knowing that I’m going to be diving there for the next four years is what motivates me more than any competition. Because for a long time, I knew that my goal was to dive post-secondary. ... And I've had a really good year actually just training and improving my dives, so it's been going well.”

And there’s even a competition coming up. Next week Howard will take part in a provincial championship meet being held virtually, with divers filming their dives at their home pools and then sending them in to a group of judges.

Beyond that, Howard will keep training, competing and working in the Vancouver area for the next year, before heading off to Penn in the fall of 2022 to begin the next chapter of her life.

“It was very frustrating and hard,” she says about navigating it all in the COVID era. “So to finally have that answer, and knowing what I'm going to do after high school, feels really good.”