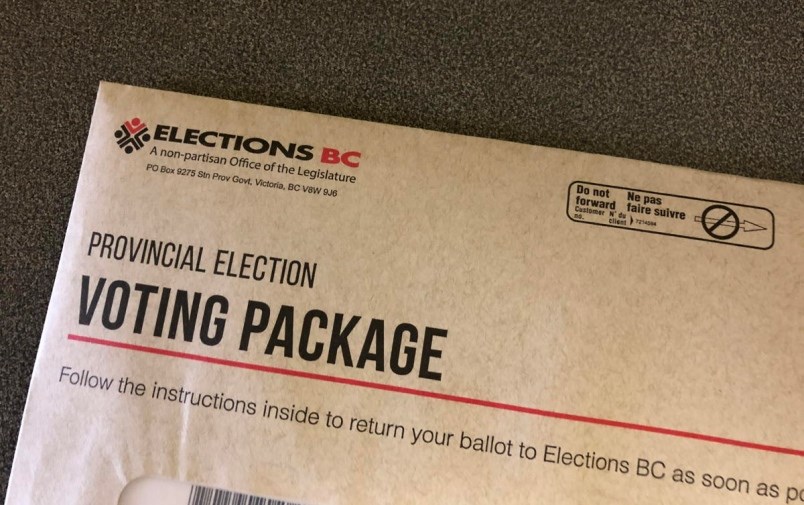 Faced with campaigning in a pandemic, a number of North Shore candidates turned increasingly to paid phone calling and text message services as well as advertising on social media to connect with voters.

Taxpayers also coughed up over $158,800 towards North Shore candidates’ campaigns – as publicly funded contributions replaced donations from corporations and unions for the first time in B.C.

Those were some of the highlights contained in election finance reports for the October provincial election in B.C. Candidates were required to file reports by Jan. 22 and those were made public this month.

Despite under-spending her opponent, Chant won the election with 47 per cent of the votes to Thornthwaite’s 37 per cent.

Both NDP and Liberal candidates spent most of their campaign expenses on advertising. Chant spent just over $19,000 on advertising. That included over $5,800 on social media including Facebook and Google ads, just under $5,000 on commercial canvassers, (including phone and text messages), just under $2,400 in newspaper ads, $3,370 on lawn signs and just over $2,100 in brochures and other promotional material. Other expenses included over $4,000 on professional services including campaign workers, $1,800 on postage and over $3,800 on office expenses.

Chant funded her campaign with $39,000 in transfers from the NDP.

Thornthwaite also spent the lion’s share of expenses – about $25,000 – on advertising. Thornthwaite spent over $7,900 of that on promotional materials including brochures, and over $7,100 on commercial canvassing (including phone banks and text messaging). Her campaign spent just under $3,900 on newspaper ads, over $3,100 on lawn signs and just over $2,300 on social media. Other expenses included $7,000 on salaries for campaign staff, over $5,300 on postage and just over $3,100 on office expenses. Thornthwaite’s campaign was funded by just under $45,000 in transfers from the B.C. Liberal Party.

Third-place finisher Harrison Johnston of the Green Party spent $5,200 on his campaign, including $2,500 on newspaper ads and $1,300 on brochures.

In North Vancouver-Lonsdale, heavyweight NDP MLA Bowinn Ma spent the most to secure her re-election: just under $65,000, including $57,000 subject to election expense limits. Ma’s campaign spent approximately $23,000 on advertising. The largest portion of that – almost $8,000 went to social media including $4,100 on Facebook and $3,700 on Google. Her campaign also spent $5,700 on brochures and door hangers, $4,600 on lawn signs, $3,400 on commercial canvassing including phone and text messaging and $1,500 on newspaper ads.

Other expenses included almost $12,000 on salaries for campaign staff, over $8,900 for professional services, including web design and photography, $6,500 for postage and courier services, $3,900 on office expenses and over $2,400 for telecommunications. The NDP bankrolled Ma’s campaign, transferring $84,000 to her campaign.

Ma’s Liberal challenger Lyn Anglin spent almost $46,000 on her unsuccessful attempt to win back the North Vancouver-Lonsdale seat for her party, including over $42,000 in expenses subject to limits. Of those expenses, $30,000 went to advertising – by far the largest expense. That included $10,000 spent on brochures, $6,000 on commercial canvassing including phone banks, $4,100 on newspaper ads and $6,300 on social media. Other campaign expenses included $7,000 on salaries and $2,200 on office expenses. Anglin’s campaign was also funded by her party.

In West Vancouver-Capilano new Liberal MLA Karin Kirkpatrick, who replaced retiring Liberal MLA Ralph Sultan, cruised to victory on election spending of roughly $32,000. Most of that – about $24,000 was spent on advertising, including $12,400 on newspaper ads, $6,000 on commercial canvassing, and $5,000 on brochures. Other expenses included $3,750 in salaries and $2,700 in office supplies.

NDP challenger Amelia Hill ran a modest campaign, spending about $7,400, including about $4,500 subject to spending limits. Her expenses included $1,800 on advertising – most of that on lawn signs – plus $1,300 on office expenses and $1200 on professional services.

Green Party candidate Rasoul Narimani listed $9,900 in expenses, including $1,300 in advertising and $7,700 in professional services. The Green Party paid $4,700 in transfers to his campaign.

In West Vancouver-Sea to Sky, Liberal incumbent Jordan Sturdy – who hung on to his seat against challenger Jeremy Valeriote of the Green Party by a razor-thin margin – wound up spending over $55,000 in total, with roughly $51,000 of that spending happening during the campaign period.

Valeriote came in second by just over 40 votes in the recount.

He spent roughly $45,000 on his election campaign, including about $37,600 subject to limits on electoral spending.

Valeriote’s largest expense was about $22,000 on advertising, including $8,600 on newspaper ads, about $10,000 on brochures and $3,600 on signs. He also spent $9,100 on salaries for campaign staff. Just about all contributions he received were from the Green Party.

Keith Murdoch, the NDP candidate, spent $15,000 on his campaign. Of that, $9,800 was subject to campaign spending limits.  Murdoch spent about $7,000 on advertising, including about $3,000 for signs and $2,600 for social media. Similar to the other candidates, his funding came from his political party.

Three candidates listed no election spending during the campaign – or close to it.

B.C. laws prevented candidates from spending more than $66,000 during the campaign period, which is defined as the time between when an election is called and the close of voting on general voting day.

Some spending is not subject to the limits.

Under the Election Act, eligible parties and candidates were able to submit claims to have up to half of their allowable election expenses reimbursed by the province this time – a first for a provincial election.

The money is intended to substitute for corporate and union political donations that are now banned in B.C.

Provincewide, those payments have been estimated to cost $7 million.

That’s on top of an estimated $54 million cost of the election itself.