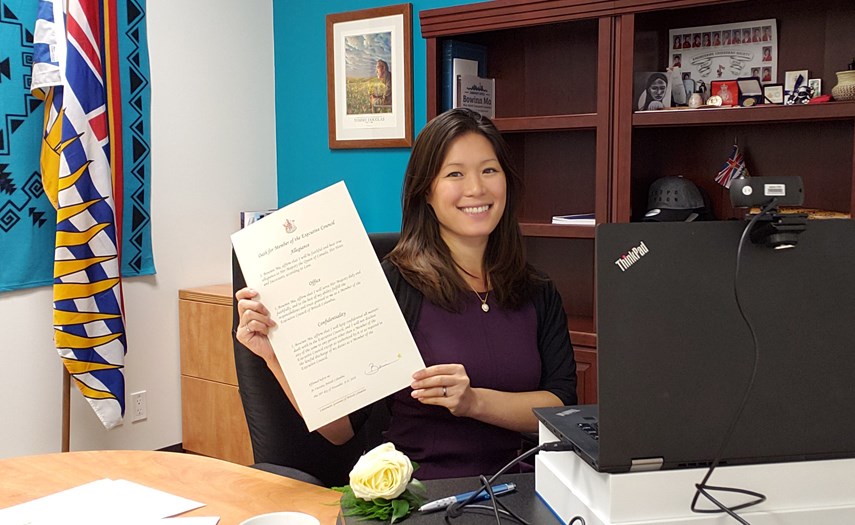 North Vancouver-Lonsdale’s re-elected NDP MLA Bowinn Ma will be joining the new provincial cabinet as minister of state for infrastructure.

Ma was named to the post when the new cabinet was sworn in Thursday.

As a minister of state, Ma will work with Transportation and Infrastructure Minister Rob Fleming, who will be responsible for the ministry as a whole, but Ma will be assigned to oversee some specific public works projects.

Her mandate letter posted on the government’s website directs her to move ahead with implementing the TransLink Mayors’ Council’s 10-year plan, including the Broadway subway, “with an eventual terminus at UBC,” and the Surrey-Langley SkyTrain extension, widening Highway 1 through the Fraser Valley, replacement of the Massey crossing, ensuring the completion of the Pattullo Bridge replacement and “Work with cabinet colleagues, communities and regions to support the planning and development of key transit projects, like high-speed transit links for the North Shore and the expansion of rail up the Fraser Valley.”

“I want my constituents to know that they are still my top priority,” she said. “They can be assured that my office will continue to be here for them and that I will do my utmost to serve them as their MLA.”

When the legislature resumes sitting on Dec. 7, the government’s focus will remain fighting the pandemic and bringing about economic recovery, Ma added.