West Vancouver Fire and Rescue say early investigation suggests that a pile of rags used for exterior staining were left at the rear of the home and may have caused the blaze.
Jun 21, 2021 12:29 PM By: Elisia Seeber, Local Journalism Initiative Reporter 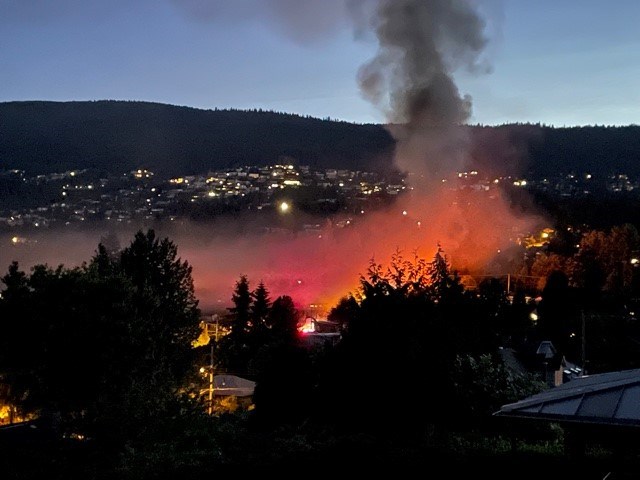 Plumes of smoke and flames billow from a home on Lawson Avenue in West Vancouver during the early hours of Sunday, June 20, 2021. The fire is believed to have been sparked by oily rags.Valerie Helsing

A West Vancouver home has been left severely damaged after a fire believed to be sparked by oily rags engulfed the house during the early hours of Sunday morning.

West Vancouver Fire and Rescue crews responded to calls of a residential structure fire at 1095 Lawson Ave. at 3:48 a.m. on June 20, with plumes of smoke and flames seen by residents across the neighbourhood.

“Crews protected the second home from ignition and performed an exterior attack on the residence on fire,” he explained, adding that knock down of the fire was hampered by structural instability as well as a ruptured natural gas line that fed the fire until Fortis arrived to shut it off.

He said once the natural gas line was shut off, crews were able to enter the structure and completely extinguish the fire.

The fire severely damaged the house.

“Early indications are that it will be a total loss,” Calder said.

The homeowners of both properties were home at the time of the fire and managed to get out of their houses safely, according to Calder. He said they confirmed with crews upon arrival that no one else was inside the residences.

Calder said that early investigation suggests that a pile of rags used for exterior staining were left at the rear of the home and may have caused the blaze.

“A fire investigation has yet to determine if this was the cause; however, the most common type of spontaneous combustion fires are those caused by improperly disposed of oil- and stain-soaked rags,” he said.

How to dispose of oil- and stain-soaked rags

Calder said it was important to know the right way to dispose of oily rags, reminding residents that rags soaked with oil paint should never be piled or balled into a tight mass or tossed into the regular trash while they’re still wet.

He said the rags should be left to dry thoroughly before disposal.

“Spread the rags outdoors, on the ground or on a metal rack, until completely dry and somewhat hard,” he explained.

“Two full days is usually enough time, but it might take longer.”

He said once the rags are completely dry, they should be safe for disposal.

“This method allows for the oil in the rags to fully cure without overheating,” Calder said.

Lastly, he advised people to wait until collection day to put the rags in the trash.