Another West Vancouver heritage house is bound for demolition

It's time to say goodbye to the Dawson House: "one of the last remaining architectural landmarks of its kind in West Vancouver."
Feb 10, 2021 6:05 PM By: Elisia Seeber 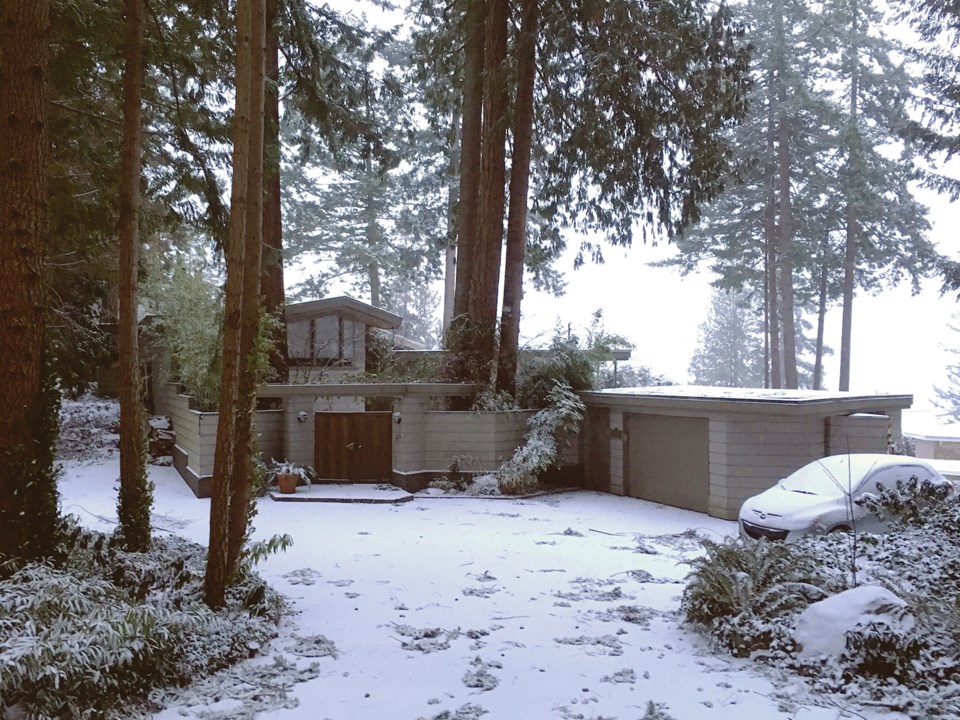 After years of efforts to preserve the Dawson House, West Vancouver will say goodbye to yet another architectural landmark.

The District of West Vancouver council voted unanimously in favour of staff’s recommendation to remove the property, at 4170 Rose Cres., from the Community Heritage Register to allow the owners to demolish the house, in preparation for a subdivision sale, at Monday's (Feb. 8) general meeting.

The residence in the Sandy Cove neighbourhood was designed by award-winning architect Ron Thom and built in 1958. It’s a classic example of West Vancouver’s mid-century modern housing, but it has failed to garner interest from heritage buyers over the years. The property is known as the Dawson House because it was originally built and owned by Bob Dawson, a friend of Thom.

Speaking at the meeting, Michelle McGuire, senior manager of current planning and urban design with the district, said this was "a unique circumstance where staff had worked with the owners to temporarily retain the house to look at heritage protection opportunities."

She said the homeowners had "acted in good faith" throughout the process.

"For the last six to seven years, the owners have actively marketed the site, showcasing the heritage potential," said McGuire.

"Unfortunately, the owners have informed staff that there has been no interest from a potential owner who would like to save the house to date, through a heritage revitalization agreement, and the owner let staff know that they're now looking to sell the properties."

Looking back, she said the homeowners had completed a renovation of the house and site that had resulted in the district awarding them the Heritage Achievement Award in 2009 for their efforts.

Initially, the home was never listed on the Community Heritage Register, and in 2016 the owners submitted a subdivision application to the district, and the site met all the zoning requirements. McGuire said the proposed subdivision would have required a demolition because the new lot lines would have bisected the house, and that's not permitted under the zoning bylaw if you're creating new lots.

"So, in order to avoid demolition, staff worked with the owners to approve a temporary use permit, which allowed the house to remain after the site was subdivided," she said.

Approved in 2018, the temporary use permit, which is valid for three years, is set to expire coming up in September.

"With the approval of the temporary use permit, it was understood at the time that the house could be demolished prior to the expiry of the permit if a heritage retention option couldn't be found," said McGuire.

In 2019, council also added all nominated sites, including 4170 Rose Cres., to the Community Heritage Register.

After many years of trying to save the property, staff recommended the house be taken off the register to allow the homeowners to get on with their sale plans.

'One of West Vancouver's last remaining architectural landmarks of this kind'

However,  the West Coast Modern League, a non-profit society dedicated to celebrating and enhancing appreciation of West Coast architecture, were incredibly concerned about the removal of the property from the register and its imminent demolition.

Adele Weder, founder, and Steve Gairns, chair, had hoped the current or future owners could continue to work with the district to explore heritage conservation options and move towards a permanent solution “to safeguard one of West Vancouver’s last remaining architectural landmarks of this kind.”

“The house is one of the earliest built examples of the hexagonal grid,” they wrote in a statement. “Also called the ‘hex grid’ or ‘30-60-90’ grid, in reference to its acute and oblique angles, this unique design approach was pioneered by Frank Lloyd Wright and brilliantly harnessed by Ron Thom as an effective way to design homes on West Vancouver’s famously irregular topography.”

“For the collective good of the community and its future generations, we implore council to reject the removal of this landmark from the Community Heritage Register.”

A real 'heartbreaker' to see the house go

Council agreed with staff that there was no more that could be done.

Coun. Sharon Thompson said she accepted that staff and the owner had done everything they could for the property, but it was "a heartbreaker" to see it go.

"It's a gem of a home, and it's a part of our history and culture that we won't get back and, you know, in my heart of hearts, I hope somebody swoops in and says I'll take that house and relieve the whole situation," she said.

Coun. Craig Cameron said while he was also "a big lover of architecture," unfortunately, the district couldn’t "solve every problem with the public purse."

He said he expected the district would receive criticism for its choice, as it did with its decisions to demolish both the deteriorating Klee Wyck house, at 200 Keith Rd., and the Forrest-Baker house, another masterpiece of West Coast Modern architecture designed by Ron Thom and Dick Mann, at 1143 Eyremont Dr.

"It's the sad reality that we just can't, we cannot, spend public resources to buy all these properties to make sure they get preserved," said Cameron.

"I wish it were different, but that's the fact of the matter."

Mayor Mary-Ann Booth echoed the sentiment that everyone involved had done their best to save the house.

"As a lover of mid-century modern housing, I am always impacted by this, but I think in this particular case, the owner has really done everything they possibly can," she said.

"It's been actively listed, so anybody that is seriously looking for these types of houses is watching for that."

Booth also said part of her vision for a new Arts and Culture Centre is to highlight the community’s unique and long history of mid-century modern housing.

“In Palm Springs they have a museum dedicated to it, and it's really shone a light on all of their mid-century modern housing, and they are now very valued," she said.

"Without any protection measures they become as sought after as a unique piece of art."