Artists reflect on challenges and unlikely inspirations one year into pandemic 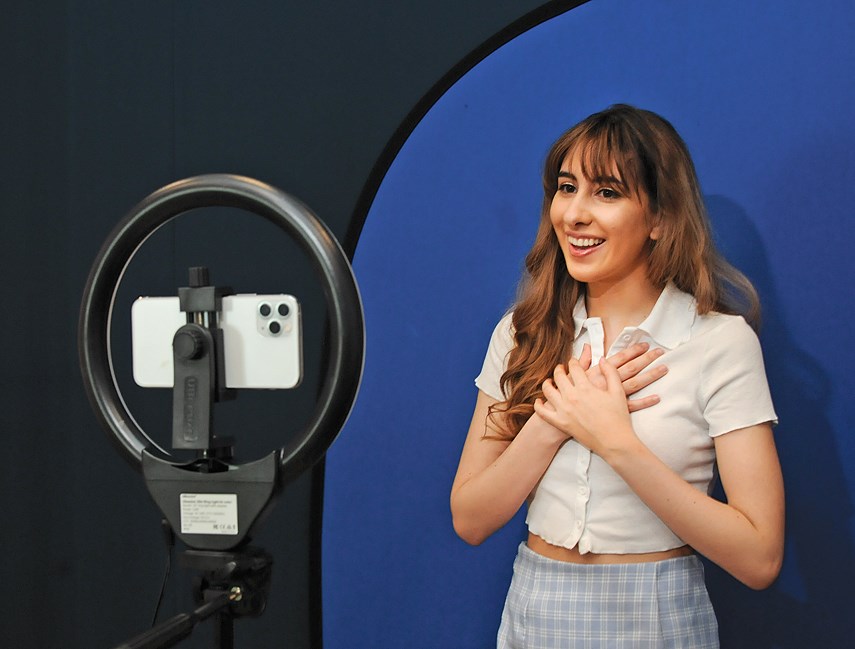 North Vancouver singer and actor Ava Maria Safai records her own casting video using a blue screen and her cell phone. Creative people all over the region have had a challenging, and at times inspiring, year as they’ve balanced their craft with COVID.Mike Wakefield, North Shore News
Like many young artists who wrapped up their fine arts degrees last spring, Ava Maria Safai was ready and raring to hit the stage running.

Last March, Safai and the rest of her classmates in the University of British Columbia’s theatre and film program were disappointed to learn that the run of shows for their final school production was being cut short due to the COVID-19 concerns that had just taken hold in Canada.

A year into the pandemic, Safai has remained productive, even if that’s meant exercising her creativity in ways she hadn’t expected.

Even though she managed to secure an agent right out of the gate after graduating, physical distancing requirements and a general suspension of many productions in film and theatre meant getting into the casting room has been a challenge, according to Safai.

Many auditions and callouts have taken place virtually, with Safai opting to set up her own blue screen at home and self-record her addition tapes using an iPhone or camera.

“That’s been nice for a couple reasons because I can decide how I want casting to see me,” she noted. “The positive of all this is I have been able to create a lot more of my own work. I kind of already expected that to happen right of the gate anyway.”

She’s been able to focus on her music during this time in particular, including releasing her third album, Goodbye, Dalloway, and has been busy writing and trying to collaborate with friends and colleagues in the arts when she can.

“I think a lot of people worry for artists right now,” she said. “I haven’t done a single in-person play since the pandemic.”

Arts spaces and live events venues on the North Shore, from the Polygon Gallery to the West Vancouver Art Museum, have received grant money through the provincial government and BC Arts Council.

While individual artists themselves are eligible for certain grants through the provincial arts council and other local community organizations, it can be a tricky process to navigate for those that aren’t used to it.

Safai was one of 25 North Shore artists who received grants from the Fund for the Arts on the North Shore charity – which was celebrating its 25th anniversary – at the end of last year.

While the charity doles out larger legacy grants every year, the point of the 25th anniversary $200 grant program was to highlight the sheer number of creative professionals working on the North Shore during a challenge year, according to Anne Rodgers, a volunteer board member with the charity.

“I think we can say for sure that we know that, for many artists, they have been very disconnected not being able to showcase their art and to perform. We also know that for some it’s been a very creative period  because they’ve had time,” said Rodgers.

Both Safai and Rodgers acknowledged that every bit of extra cash counts now more than ever.

Safai, however, was quick to point out that while everyone in the arts is facing challenges to a degree, different artists may be facing different economic challenges due to the pandemic.

“I might be one of the more lucky artists right now because I have parents that are musicians that have their own music store and a music school and I get to work there without having to worry about how to pay my bills. That’s something I don’t take for granted. Maybe other artist will have a very different story than me,” she said.

For North Vancouver-based artist Jenn Ashton, the pandemic has severely impacted one aspect of her artistic practice and likewise allowed her other creative interests to thrive.

“The upside is I’ve got a lot of writing done and I’ve learned a lot more about self-promoting and taking advantage of a lot of social media opportunities that are out there right now,” said Ashton.

That part is certainly true – over the past year, Ashton has published award-winning magazine articles, released her debut collection of short stories, been a virtual panelist at literary festivals, and done the podcast circuit from here to the U.K. to talk about her work.

But her visual arts, one of her main passions and sources of income, has taken a huge hit, she said.

In past years, a painter like Ashton would rely on being able to showcase her artwork in-person at exhibitions, sometimes more than 20 shows a year, in order to sell her work.

“I was always involved in something. That really propelled sales,” she said, adding that the sale of her paintings typically accounts for a lot of her and her husband’s extra earnings.

“It’s definitely been a humongous loss of income. I normally sell quite well,” said Ashton.

For the first time since the pandemic started, Ashton is thrilled to have her work on display in-person at the upcoming SPECTRUM show at the Silk Purse Arts Centre in West Vancouver, starting March 11.

“That’s my first live event I’ve been in in over a year,” said Ashton. “It’s been a very challenging time – but it’s made me think even more creatively.”