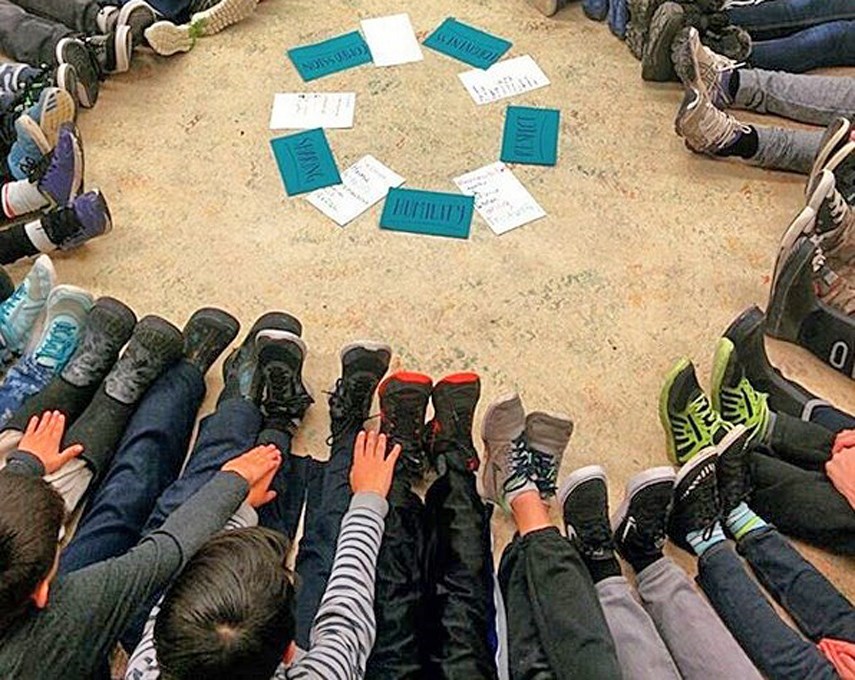 North Shore Restorative Justice Society leads a workshop at a North Van elementary school. A new PAC committee at Queensbury Elementary, with support from NSRJS, is looking to enhance the school's BIPOC education. @northshorerj via Instagram
Queensbury Elementary’s parent advisory council is hoping to facilitate more awareness, understanding and education around diversity through the formation of a new committee.

The BIPOC Committee (Black, Indigenous, and people of colour) was envisioned during the summer and had its first meeting this past fall, according to Sioned Dyer, a Queensbury parent and committee member who’s also the executive director of the North Shore Restorative Justice Society.

“I see a desire to have greater conversations, to have meaningful actions, and to support racialized folks in our communities,” said Dyer, adding that many people around the world were galvanized this past year following the death of George Floyd in the U.S. “The North Shore community certainly has responded and recognized there’s a need, not only to amplify diverse narratives, but also that systemic racism does exist in our large institutions from top to bottom.”

The BIPOC Committee initiative is being championed by Dyer, as well as primary organizer Katie Scotland, along with other parents Nicole McArdle, Sarah Hughes, Shanna Robertson and Megan MacKenzie, with support from Queensbury principal Kelly La Roue and vice-principal Carly Roy.

The committee is likely the first parent-led group like this on the North Shore, according to Dyer.

Throughout the school year, the committee hopes to promote equity, diversity and inclusion in the school environment through various projects.

Current initiatives include asking parents to donate books by diverse authors to classroom libraries and helping to set up an online catalogue of books that promote diversity. The committee is also gathering resources to run a Black History Month awareness initiative this February. Committee members are also aiming to launch a four-part series for parents to promote the diverse, lived experiences of people from different communities on the North Shore and how parents can support learning for their children, according to Dyer.

The committee and school are also partnering with the Restorative Justice Society to run a social justice project for students in grades 6 and 7, a project similar to one that is also coming to Mountainside and Sutherland secondaries, and will give students the opportunity to discuss issues around the themes of diversity, equity and inclusion in a safe space while hearing from thought leaders on the subject.

“We really want to do something for racialized students who we know disproportionately receive punitive responses to behavioural issues – they’re more likely to receive infractions, suspensions, expulsions. They also don’t see themselves as greatly represented not only in the teaching and the administration of the school district but also in teaching materials and things of that nature,” said Dyer.

The North Vancouver School District is also gearing up to celebrate Black History Month next month, with schools encouraged to lead or join activities that support learning more about the contributions and struggles of BIPOC Canadians, according to Lisa Dalla Vecchia, school district spokeswoman.

“We are pleased that our schools and PACs have and continue to take a leadership role by supporting their communities with resources, tools, and opportunities to engage in dialogue and learning – together,” said Dalla Vecchia.

At Ecole Argyle Secondary, students are being encouraged to wear a black shirt this Friday (Jan. 15), the birthday of Martin Luther King Jr., to reflect the importance of the Civil Rights Movement and a commitment to continue to learn in response to a growing movement to have the day christened Black Shirt Day.

In September, school trustees voted to set up a working group that includes Black, Indigenous and people of colour to dig into the issue of systemic racism in the school system and report back to the board with recommendations at the end of the school year.

The anti-racism working group has met and will continue to meet throughout the school year, according to Dalla Vecchia. “There is a lot of important work to do,” she said.

The goal of the group is to help the school district reflect on its own practices to ensure all students and staff have equal opportunity for success, break down any barriers that may affect BIPOC students or staff, and create space for dialogue and communication, said Dalla Vecchia.