Community members join columnist in handing out 170 Hot Wheels, just for fun and fellowship
May 2, 2021 11:30 AM By: Brendan McAleer 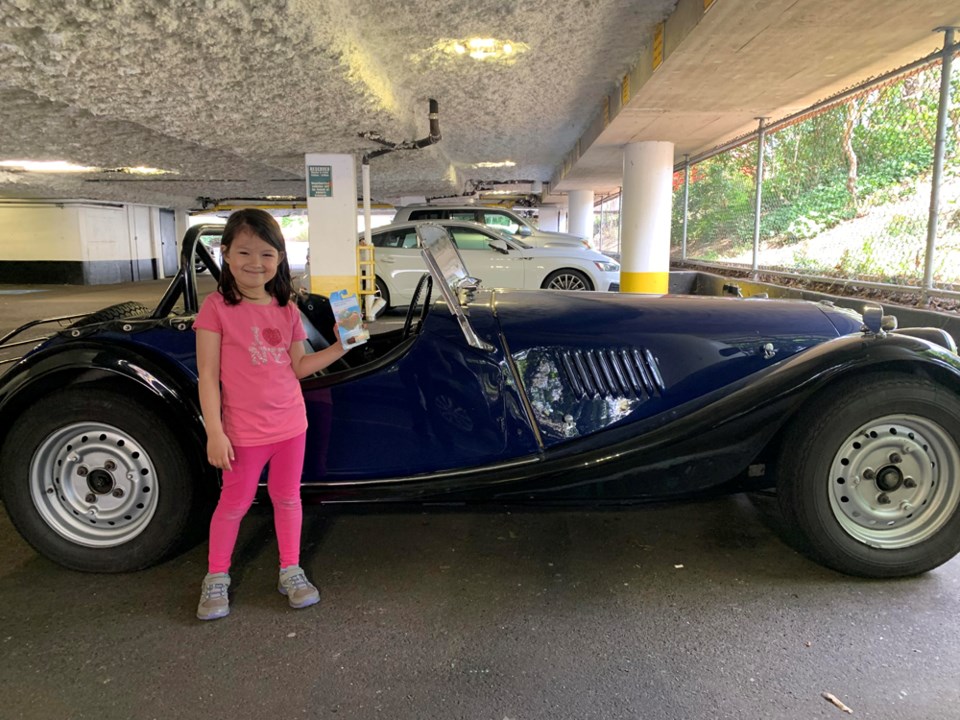 Athena Taylor gets ready to leave a Hot Wheels surprise for the owner of a cool car during a community giveaway event organized by columnist Brendan McAleer. Zach Taylor

A few weeks ago, I wrote a brief column looking for volunteers to help be give away 100 tiny cars in a probably silly but well-meaning attempt to spread a little random joy around.

Certainly there are plenty of things to be miserable about, but you never know what difference a small amount of positivity can make. And thus, Wednesday, April 21, 2021, became Hot Wheels Day.

We did not end up giving away 100 Hot Wheels. We did 170. In response to my call, more than a dozen volunteers offered to help hand out cars from West Vancouver right out to Deep Cove, and as I did the math, I realized I was only going to be able to give each person a few.

Happily, a young mechanical engineering student named Raphael Plana stepped up. He said he had a few extra from his collection he could spare – and when I arrived to pick them up he gave me an enormous cardboard box full of Hot Wheels. I bought a couple of extras from the suspiciously well-stocked display at my local grocery store (there is no way somebody in the inventory department does not have a bunch of Hot Wheels cluttering up their desk), and bagged them up.

The inspiration for this idea, if you missed it, was partly as a reaction to the tragic events of March 27, at the Lynn Valley library. Or rather, it was a reaction to the response of the thousands of good-hearted people who make up the fabric of our neighbourhoods.

A rent had been torn in the fabric, and many hands came together to patch and to bind, to help and to heal. As a father, it was just the most uplifting thing. For weeks afterwards I kept seeing stories about fundraisers hitting their goals, unknown Good Samaritans sought, even a grateful letter to a couple of young guys who helped push a senior's stalled car to safety.

So, partly that feeling of gratitude, and also the lesson I learned in writing the obituary of a man my age. Ryu Asada, a lead Hot Wheels designer, died of cancer earlier this year, and as I set about talking to the people who knew him, they all said the same thing. That he was just such and unflappably positive person.

“The whole time I knew him, he was dying,” the ordinarily grumpy Tim Mings told me. “He never said one word of complaint. He was just one of the most legit people I've ever met.”

Asada made tiny, joyous toy cars his life's work, so they seemed fit for the purpose of random acts of kindness. I sanitized everything, printed out explanatory labels, bundled the blister packs into recyclable/reusable bags, and set out to drop them off at volunteer's doorsteps.

It was a beautiful bluebird spring day, when the North Shore looks its best. I saw a father and a son picking up garbage, cleaning their street. Somebody let me merge into traffic with a cheery wave. The volunteers were delighted to receive their assignments.

As I've mentioned, there were a lot of stops. Some volunteers preferred to remain anonymous, but I wish to thank Wendi Vaiser, Barrie Street, Kim Henen, Joshua Peters, Renee Benoit, Lynda Cameron, David Mazzei, Wing Taylor, and Dasha Postnikova. Zach Taylor, who I've known since Grade 4, took his kids on the expedition. Even Peter Kvarnstrom, publisher of the North Shore News, pitched in.

Everyone involved seems to have had a great deal of fun delighting kids, leaving surprises for strangers, and perhaps being a bit of a kid again themselves. Ms. Vaiser left one on a police van, which was a bit of cheeky good fun. Zach's daughter Athena popped one on a wood-framed Morgan, one seriously cool car. Ms. Postnikova and her toddler left them on a couple of cars with kid-seats in the back, and gave out a few at Maplewood Farm.

My daughters and I took a box down to Lynn Valley library itself, and I got the kids to hand out a few to anyone they chose.

“Thanks for the Hot Wheels!” yelled a bunch of delighted boys, and also a pair of women having a socially distanced coffee.

I think I have to make this an annual thing. If nothing else, it's maybe an excuse for me always buying Hot Wheels at the grocery store? Question mark?

Let me leave you with an account of one volunteer's experience of Hot Wheels Day. Lynda Cameron was one of the first people to raise their hand, responding on the day the original column was published.

“I had fun placing these out anonymously; in a mail box, on a pedestrian walk button,” she wrote in an email. “I gave out two to two kids I know anonymously (hid them for them to find) and one is being mailed to a house bound senior.

“I have two on reserve to give to emergency responders, just waiting for the perfect time, and I did hand one out to a child in the grocery store who immediately opened it and lost it a few seconds later under a large produce bin (which was rescued – twice – by a long cucumber, which I ended up buying, because, well COVID germs and you know, eat your veggies).

“I am keeping one maybe, or I will find a perfect secret place to put it when I stumble across it. The Mum in the grocery store stated, 'I LIVE IN THE BEST NEIGHBOURHOOD!!!' ...and I think she is right!”

These cookie boxes are being sold to support victims of the Lynn Valley attacks
Apr 3, 2021 8:01 AM
Comments