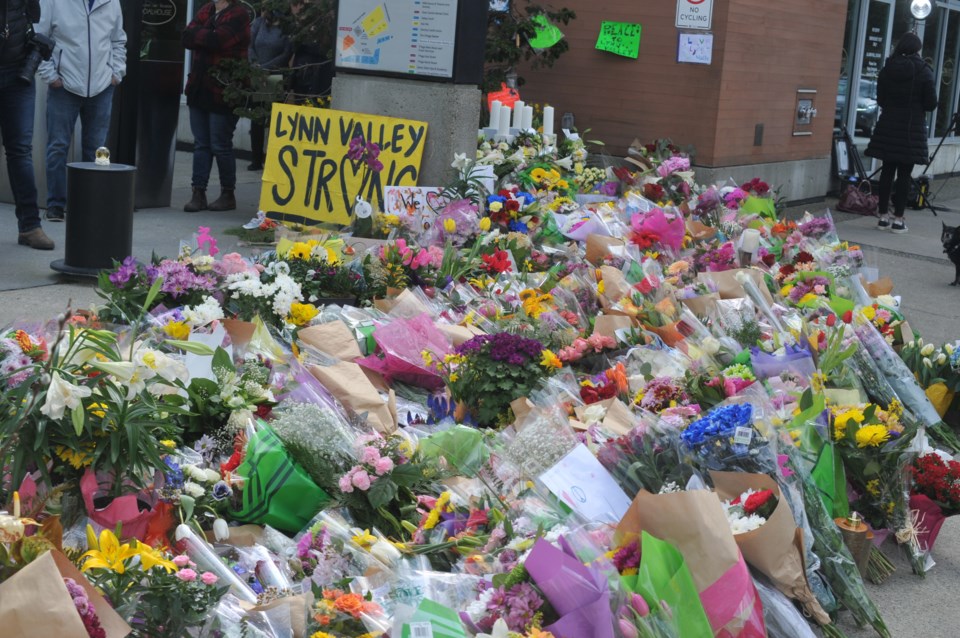 A huge floral memorial grows outside the Lynn Valley library complex on March 31, 2021, a few days after six people were injured and one woman was killed in a stabbing spree. Paul McGrath, North Shore News
It’s been one month since the lives of many in Lynn Valley were transformed.

Following a tragic, seemingly random mass stabbing that rocked the community on March 27, families, individuals, first responders and business owners have looked to rebuild their lives and reclaim the site of the incident – where six people were injured and one woman was killed – at Lynn Valley Village.

Christina Casperson was having lunch with her grandmother at the Black Bear Neighbourhood Pub, a short distance from the library and village complex on Lynn Valley Road, when emergency vehicles with sirens blaring rolled by on that day.

“I saw the man in the middle of the road and all the police were surrounding him, they had out their assault rifles. It was pretty serious. I’ve never seen anything like that,” said Casperson. “We kept seeing all these ambulances and more cop cars.”

In the heat of the moment, Casperson couldn't fully grasp the gravity of the situation, at least not yet. It was later that the sheer emotion of all the people who had been hurt hit her like a ton of bricks, she said.

“It wasn’t really until the next day that it really sunk in for me. It was such a shock that it really didn’t register,” she said. She didn’t leave her apartment at all the day after the attack.

For many of the victims and witnesses that day, looking toward the next day – moving forward while not exactly moving on – is where they’ve had to focus their energy.

The library – where the attack initially occurred – has reopened, a vigil was held, business owners in the area hosted a moment of silence, an uplifting video was created to help reclaim the space, and fresh flowers continue to brighten the site of the tragedy.

Perhaps most importantly, many of the victims of the stabbing spree are doing much better, according to one organizer who is in touch with them.

Jacquie McCarnan, founder of the community group North Van Cares, said the five victims she has had the opportunity to meet with are doing “exceedingly well.”

“Everybody is healing well, everybody is in a better headspace right now than they were a few weeks ago, or even last week,” said McCarnan. “I had one person tell me specifically that she’s really starting to feel like herself again. That felt great to hear that.”

McCarnan launched a crowdfunding campaign the day after the incident, to support victims and in response to the outpouring of community concern following the attacks.

While some campaigns were launched to support individual victims of the attacks, McCarnan’s campaign was meant to consolidate funds to distribute equally among all the victims.

After the crowdfund exceeded its goal of $130,000, five of the victims received cheques for $18,900 earlier this week.

“These people are going to need trauma counselling, and it’s very, very expensive,” she said. “We wanted them to have some discretionary income so they could do anything they need to help themselves. We wanted to make that money available to them.”

Additional donations that came in directly to North Van Cares will be distributed to the victims next month, said McCarnan.

“I think that the actions of the community have gone a really long way to renew [the victims'] faith, or sustain their faith, in their neighbourhood and humankind after such a devastating event,” she said.

Following the attacks in Lynn Valley, the outpouring of love and support from the community has been heart warming, according to a statement yesterday from Mayor Mike Little, one month after the incident occurred.

“We have also received well-wishes from organizations and individuals across Canada who stand strong with us, and I want to thank everyone who has expressed their support,” stated Little. “It will take time to heal, but I know that the Lynn Valley community has the strength and resiliency to get through this challenging period.”

In the aftermath of the attacks, the sheer number of flowers, bouquets and uplifting messages left around the Lynn Valley Village complex has been a sight to behold.

One month has passed since the attack in Lynn Valley. The outpouring of love and support from our community has been heartwarming. Read the full statement from Mayor Little: https://t.co/adph6Y4hU4 pic.twitter.com/FiYANXkfeZ

Earlier this month, the District of North Vancouver launched an online memorial to preserve and document the outpouring of love and strength, which has included sharing photographs of the floral tributes that have dotted the area.

While tributes of fresh flowers are still being added to the makeshift memorial, the district has slowly started to remove spent flowers, which may be used in a future memorial garden project.

“The wilted flowers are being collected, mulched and composted as we consider options for a future longer-term display. Bulbs from plants are being collected and preserved, too,” said district spokeswoman Cassie Brondgeest, in an emailed statement. “Some plants placed at the memorial are being incorporated into the planter that will be in the plaza over the summer months, depending on the type of plant.”

A 28-year-old Quebec man is facing second-degree murder charges in connection with the March 27 incident.

Casperson said she has dropped off flowers at the site and took part in an outdoor vigil organized by the Lynn Valley Lions Club earlier this month.

While Casperson has done everything possible to move forward following the attacks, she said it was surreal to actually talk about it again during an interview with the North Shore News.

“Now that I’m actually reliving it, I’m getting goosebumps,” she said, before adding: “I think if anything, it’s going to draw the community together. We’re all in this thing together.”