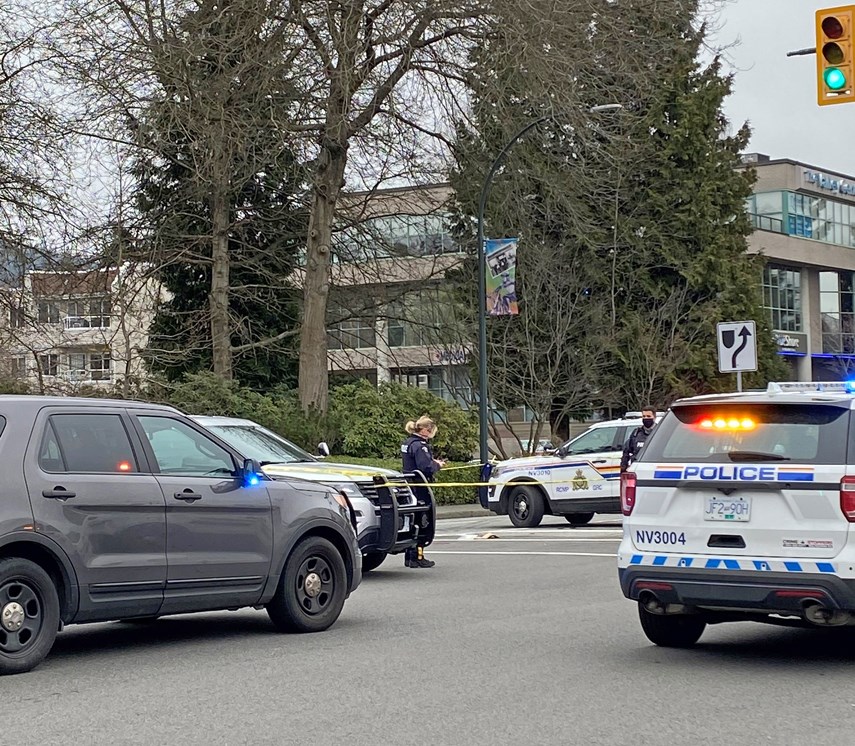 Police respond to a call about multiple stabbings in the Lynn Valley town centre after a 911 call at 1:46 p.m. on Saturday, March 27, 2021.Neetu Shokar

One woman is dead and multiple people have been taken to hospital following a series of stabbings within and outside the Lynn Valley Village library complex today.

When police arrived at the scene, they found multiple victims inside the library suffering from stab wounds.

A suspect is in custody and there is no longer an ongoing threat to the public, according to the North Vancouver RCMP.

Amy Robertson, emergency health services spokeswoman, confirmed that the call came in at 1:46 p.m. on Saturday [March 27]. Eleven ambulances and two supervising vehicles were deployed to the scene at Lynn Valley Road and 29th Street.

The regional Integrated Homicide Investigation Team has been called in. IHIT has confirmed that one woman who was stabbed has died as a result of her injuries.

Neither emergency health services nor police could confirm any other information about the victims.

The motive behind the attacks remains unknown. The suspect was known to police, according to IHIT spokesman Sgt. Frank Jang.

Shayla Dyson, a Vancouver resident who was eating at nearby Brown's Socialhouse in Lynn Valley Village, witnessed a woman  – it's unknown if it's the same woman who has since died  – walking with her child near the library when she was suddenly jumped by a man and stabbed, according to Dyson.

“I immediately shoved one of my friends behind me so they didn’t have to watch it happen," said Dyson. The man then apparently left the scene before he was arrested by police.

Brown's staff then brought the woman, along with her child, into the restaurant for safety.

Dyson said the woman's child appeared to be physically unharmed.

“He was covered in his mom’s blood," noted Dyson.

North Vancouver District Public Library tweeted that the Lynn Valley Library branch would be closed for the rest of the day and that the public should "avoid the area."

Police are currently gathering evidence. Anyone with information regarding this investigation is asked to call the IHIT information line at 1-877-551-IHIT (4448) or by email at ihitinfo@rcmp-grc.gc.ca. If you wish to remain anonymous, please contact Crime Stoppers by phone at 1-800-222-TIPS (8477).