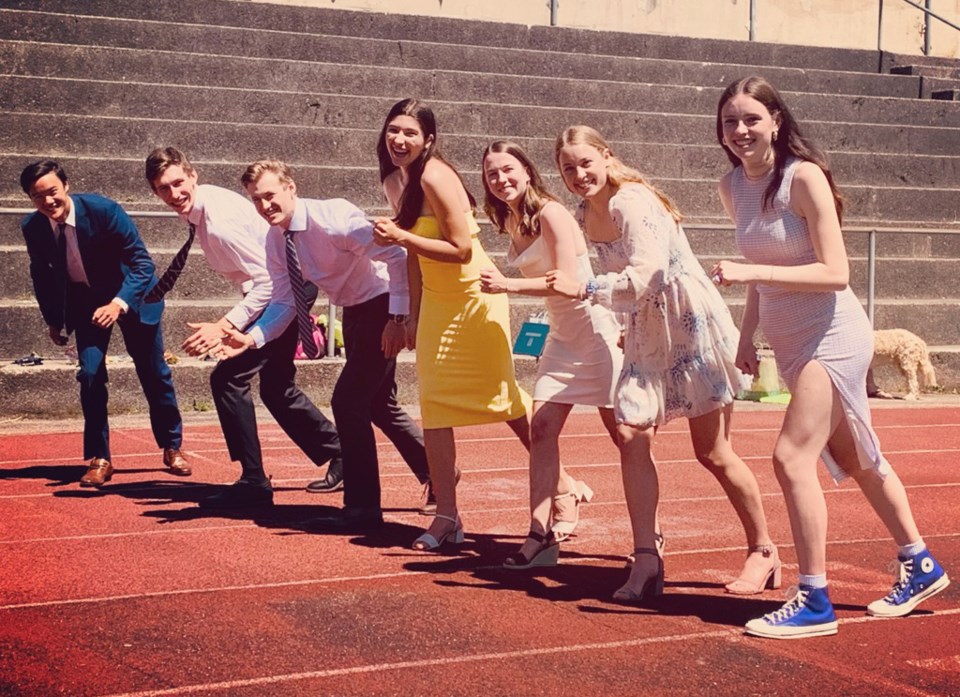 High school athletes in British Columbia were kept out of the game basically all year due to COVID-19 restrictions, but North Shore speedsters got to put in one final kick thanks to a virtual track meet organized by local coaches.

Health restrictions kept the district’s young track stars from getting together for inter-school events, but it didn’t stop them from taking part in the first (and hopefully last) North Shore Secondary Schools Virtual Track & Field (NSSSVTF) meet.

Schools from across the zone were invited to record their own scores in a number of different track and field events and then send them in to organizer Leslie Buchanan, a coach at West Vancouver Secondary, who tabulated the results on a virtual scoreboard.

It wasn’t quite the same as getting everyone together on the track for a real meet, but it was the next best thing, said Buchanan.

“The kids were so excited to be able to participate in any sport,” she said, adding that it was a fantastic experience for the coaches as well after the year everyone has gone through with COVID restrictions. “Having the opportunity to coach and be around kids who are doing something that they're good at and they're enjoying is such a pleasure for us. … You really notice what a positive experience it is for us as adults, as well as for the kids. I miss the camaraderie with the coaches from the other schools, but we were emailing and talking a bit of trash over email, so that that was fun.”

The meet was broken into three two-week scoring periods, with high school teams invited to individually record scores at local tracks or on their own school grounds and send them in for tabulation. Schools from across the old Howe Sound zone, including Squamish and the Sunshine Coast, were invited to participate, and in the end 12 schools, all from North Van and West Van, sent in results.

Nearly all of the traditional high school track and field events were offered except for the 100-metre dash – the timing was too tricky for such a fast race – the pole vault, steeplechase and multi-events. Relays were also offered for boys and girls as well as in a co-ed format to encourage participation from smaller teams. The final scoring period wrapped up at the end of May, with results posted in early June.

“Although the schools didn't interact on the track at all, the kids kind of got to see where they would have placed had we had a North Shore track and field meet or something like that,” said Buchanan. “There were some exceptional results. … There would have been some contenders at provincials.”

The fact that they got to compete at all was a victory itself for nearly everyone involved. Buchanan said many of the track teams got an influx of athletes who weren’t allowed to compete in other sports this spring.

“We got a lot more young football players out and rugby players out, because their sports weren't running,” said Buchanan. “They wanted to do something so they came out to the track team, which was a fabulous opportunity for them to try it out. The kids really wanted to participate. And before we even presented them with an opportunity that we were going to be running these virtual races, they just wanted to come out and train and be with their friends and do something active after being inside for so long.”

High school sports organizers are proceeding as if things will be back to near normal this September following the recent loosening of health restrictions across the province, with more positive news expected in the coming days as COVID rates continue to go down and vaccination rates go up. Next year everything will hopefully be back on track, but those who took part in events such as this year’s NSSSVTF likely won’t soon forget the little competitions they managed to hold during the weird school year of 2020-21.

“It was so much fun just being able to be out there,” said Buchanan.

Get your applications in! Deadline for Sarah Burke youth winter sports scholarships is Aug.1
Jul 29, 2021 11:17 AM
Comments