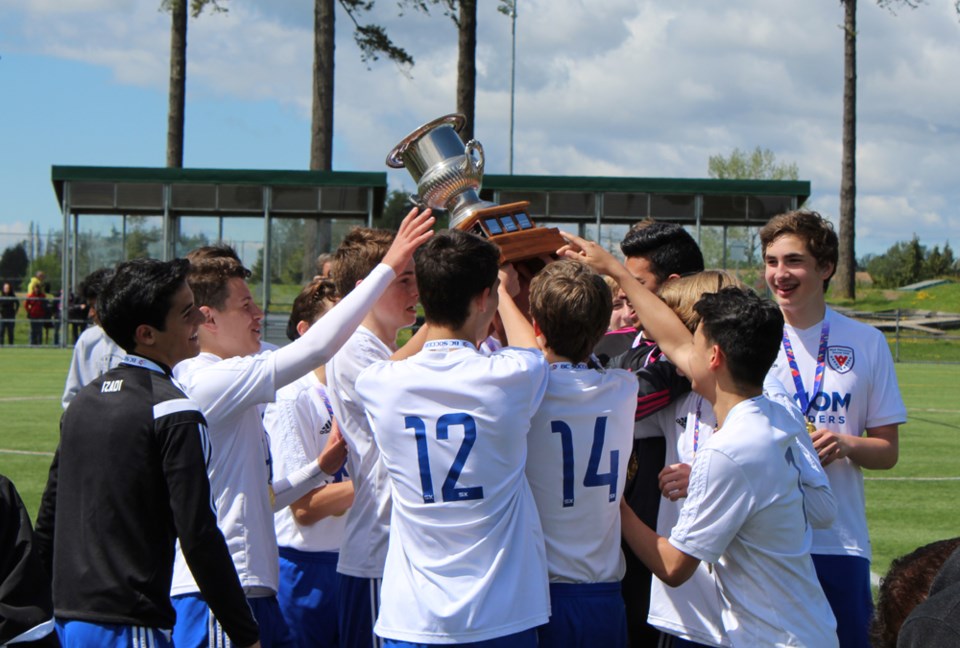 A pair of squads from the West Vancouver Soccer Club won at the top-level A Cup tournament while a team from North Van FC took home a B Cup title.

On the girls side the West Van Rangers U15 team, coached by Gareth Hughes, claimed A Cup gold with a 2-0 win over Surrey Guildford Gunners.

Mary-Beth White-Bothe opened the scoring to give the Rangers a 1-0 lead heading into halftime and then sealed the win with another marker in the second half. Captain Allie Fanzega, Jo Verdicchio, Devon Litherland and goalkeeper Zoe Macdonald helped the Rangers keep the Gunners from finding the mark.

Jenna Rempel and Lucia Bicknel also contributed strong play with Charlotte Pink, Jessica Mackenzie, Jamie Borthwick, Isabella Ahern, Kali Leskiw in on the action as well as the Rangers went through the entire Coastal Cup tournament without giving up a goal.

The tournament may have been the last Coastal Cup for Hughes who, according to assistant coach Chris Ahern, will be hanging up his clipboard after this season.

“This is a story of great players from a small club in the shadow of the North Shore mountains, but also a story of a man, ‘The Legend,’ who has given his all over a 40-year coaching career,” said Ahern. “(He’s) walking out on top, taking this group to the provincial tournament and once again creating memories for the youth and their families he has come in contact with.”

On the boys side the West Van Rangers claimed the U16 A Cup title with a 2-0 win over Port Moody. The teams were scoreless through the first half but Josh Ranjibar opened the scoring for the Rangers in the second half, intercepting a back pass and chipping the Port Moody keeper. Aidan Izadi sealed the win with West Van’s second goal, collecting a pass from midfielder Grayson King and firing a shot into the bottom left corner.

The Rangers were underdogs coming into the contest, having lost to Port Moody in every meeting between the two clubs over the past four years.

The other North Shore title came from the NVFC U16 Surge who claimed gold in the boys B Cup tournament. The Surge overcame the North Coquitlam United Hammers 2-0 with goals from Justin Abrary and Lucas Mehling.

All of the Coastal Cup champions earned automatic berths in the B.C. Provincial Cup tournaments scheduled for July 6-9 at locations around the province.