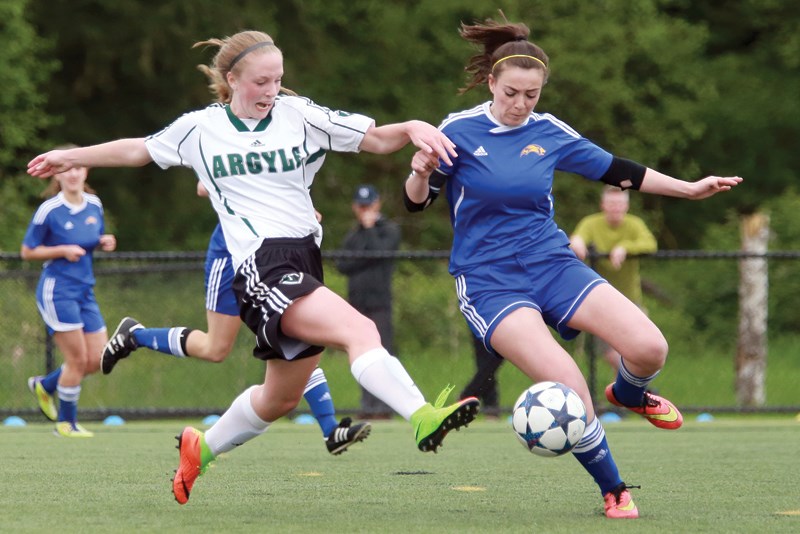 It was a battle that pitted two of the top teams in British Columbia high school soccer against each other, and in the end only one was left standing with a chance at winning a provincial championship.

The Handsworth Royals senior girls scored the coveted provincial AAA championship berth with a 2-1 zone playoff win over the Argyle Pipers May 17 at Ambleside Park. The game had added urgency this year due to a set of circumstances that resulted in only one provincial berth being available for North Shore AAA teams rather than the two that are usually on the line in the zone playoffs. That made last Wednesday’s contest a winner-take-all showdown, and it was the Royals who grabbed the prize.

“It was a real epic battle, as our games against Argyle tend to be,” said Handsworth head coach Brian Gibbard. “It was a physical contest – there were a lot of bruises and ice bags out.”

Argyle earned the top seed heading into the playoffs after winning the North Shore regular season title with an undefeated record, and the Pipers seemed poised to finish the job after opening the scoring against Handsworth. The opening goal came 20 minutes into the game when Teagan Mackay and Lauren Parr strung together some nice passes to free up Jamie Peterson who slid the ball into the back of the net. The 1-0 Argyle lead held up throughout the first half, causing Handsworth to dig for answers during the halftime break.

“We were down at the half, which was not good because I think in two games against Argyle we might have had one or two shots in the entire game,” said Gibbard, adding that the Royals didn’t panic after falling behind this time around. “We’d had a lot of the play, we’d had a lot of possession and I told them that if they could just generate a couple of shots I was confident that we could score and confident that we could move on. I thought the girls actually looked quite confident at the half that we could do that.”

The Royal response came early in the second half when the ball bounced to Ellie Gibbard and she knocked it over Argyle’s goalie to even the score.

“Once Ellie’s goal went in it seemed like we had much better of the play, we were in their end a lot and had them under a lot of pressure,” said Gibbard, adding that the marker gave his team even more confidence. “Their goal was to make the provincial tournament, and in the second half they really played like they were determined to make it happen. … I would say that’s probably the best 35 minutes of soccer we’ve played all season.”

Handsworth kept the pressure on and got the game winner from Hana Davis who headed home a cross from Hailey Nelson with 15 minutes left in the game. Argyle threw everything they had at Handsworth in the game’s dying minutes but couldn’t conjure an equalizer.

“We were in our end almost continuously from then until the end of the game,” said Gibbard. “Argyle was all over us in our end but they couldn’t score.”

The final whistle marked the beginning of a wild celebration for Handsworth.

“The girls that were on the bench went flying off the bench to grab our goalie, it was a mob scene,” said Gibbard. “There were a lot of tears – a lot of tears from the Argyle side too, their girls were very disappointed. They played so well this year. … They’re a very strong team. It’s really unfortunate that both teams aren’t going through to the provincial championships, because based on ability, they should be there.”

The loss dealt a tough blow to the Pipers, including four senior players – Kiana Mackay, Emma Archer, Jamie Peterson and Sarah Fiorvento – who have been on the team since Grade 8.

It will be up to Handsworth to carry the North Shore banner into this year’s provincials scheduled for May 31-June 2 at Burnaby Lake Sports Complex West. The Royals were in a similar situation last year – forced through a tough schedule of must-win playoff games after finishing second in league play – and ending up fighting all the way to the provincial final where they claimed silver. That playoff torture test made them stronger heading into provincials last season, said Gibbard, and he’s hoping the same will happen this year.

“It was really critical to our team last year because they really became a tight-knit group through those three tough games just to get there. And it was more difficult for us to get there this year. The games were tougher. The game against Argyle was the hardest game we’ve played all year.”

His team has continually impressed him by coming up big when it matters most, said Gibbard.

“I wish I could bottle that,” he said with a laugh. “Scott Christie, my co-coach, says that we have a very resilient group. I think he’s right. … We had to play Burnaby North on (May 15) and we fell behind quite early in that game as well and had to come back and score three goals to win that game. The girls are determined. As a group the team just refuses to accept not getting to provincials, and that’s how they played.”

Like last year, the Royals are playing their best soccer at the most important time, said Gibbard.

“Right now we’re playing outstandingly well in defence, and our midfielders really seem to be able to control large amounts of the game. With the possession game and strong defence, I think we have a chance to win every time we go in. Our goalie has been acrobatic, Jenelle Hagerman has come up with big stops all season when we absolutely had to have them. There’s starting to be a real sense of belief that this isn’t luck, a belief that we can do well.”