15-year-old phenom leads all WHL rookies in points despite missing several games while playing for Team Canada
Jun 10, 2021 11:56 AM By: Andy Prest 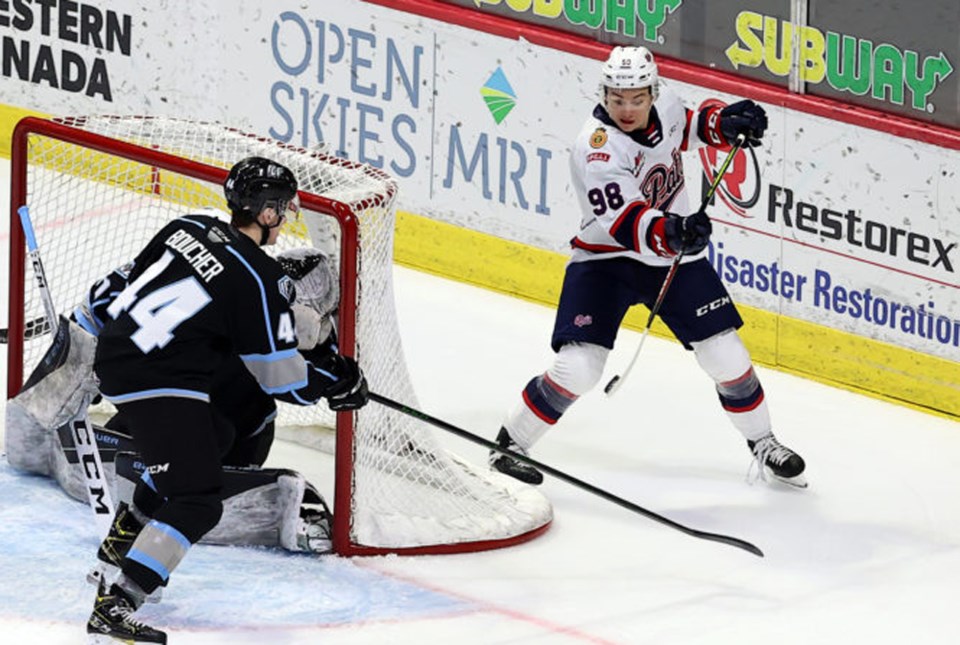 North Vancouver's Connor Bedard attempts a tricky play for the Regina Pats during a game against the Winnipeg Ice Saturday, April 3, 2021. Yesterday Bedard named the WHL Rookie of the Year.Keith Hershmiller Photography/Regina Pats

It is obvious now that the Western Hockey League was correct in granting North Vancouver’s Connor Bedard “exceptional status.”

Yesterday the league named Bedard the 2020-21 WHL Rookie of the Year, giving him the Jim Piggott Memorial Trophy after the dynamic forward led all first-year WHL players with 28 points, scoring 12 goals and adding 16 assists in just 15 games for the Regina Pats.

“Coming into the season it was a goal of mine to be Rookie of the Year,” stated Bedard in a release from the Pats. “Being able to win it, especially with all the other rookies that had such great seasons, is really special and exciting. … I’m looking forward to the upcoming season, as I can’t wait to get back to Regina with my teammates and finally play in front of our fans, who I’ve heard so much about.”

In 2020 Bedard became the first player in WHL history given exceptional status, allowing him to enter as an underage player, and he proceeded to dominate the league. Bedard was leading the entire WHL in points when he left to go play for the Team Canada at the IIHF U18 World Championships, where he tied for second in the tournament points list, helping Canada win gold.

In the WHL Bedard’s 1.87 points-per-game rate was second only to Dylan Guenther of the Edmonton Oil Kings, Bedard’s Team Canada teammate at the U18 Worlds.

“It’s another acknowledgement of who he is and what he’s done to this point in his young career as a person and player, and he’s being rewarded for it,” stated Pats head coach Dave Struch, about Bedard’s Rookie of the Year award. “There’s going to be little victories like this throughout his career and they’re all part of his development. This will be one of those things for him to build on.”

Bedard is the second North Shore player to win WHL Rookie of the Year honours in the past decade. West Vancouver’s Sam Reinhart won in 2011-12 while playing for the Kootenay Ice. Reinhart has since notched 134 goals and 161 assists for 295 points in 454 games with the Buffalo Sabres.