The first player ever to earn exceptional status in the WHL was just named Rookie of the Month
Apr 1, 2021 4:31 PM By: Andy Prest 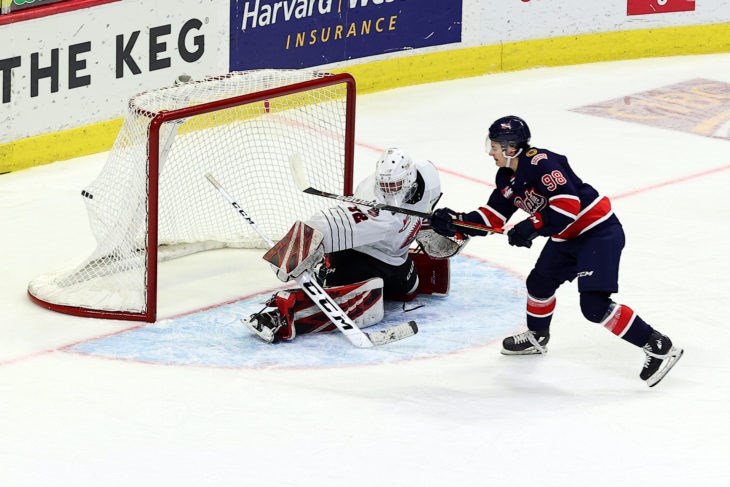 Connor Bedard scores a goal for the Regina Pats during a 3-2 overtime win against the Moose Jaw Warriors on Tuesday, March 30 in Regina.Keith Hershmiller Photography/Regina Pats

This is your periodic reminder that North Vancouver’s Connor Bedard is really, really good at hockey.

Today’s evidence: the 15-year-old is now leading the Western Hockey League in points. Bedard, the first player ever to be granted early entry into the WHL as an underage player, has racked up eight goals and 11 assists for 19 points in his first 10 WHL games. Did we mention that he is 15 years old, playing against players up to age 21?

Bedard’s latest entry into the WHL history books came on Tuesday when he scored a goal and added an assist on the game-winner as his Regina Pats topped the Moose Jaw Warriors 3-2 in overtime. Check out the goal:

And have a look at this beauty assist from one night before, a 9-4 win over the Swift Current Broncos.

Bedard ended the night with four points, one goal and three assists, and was named the First Star. The Pats are back in action tonight for a game against the Brandon Wheat Kings. WHL games are offered on pay-per-view with a subscription fee of $60 for access to every game all season, or $7 for 24 hours of viewing.

The Lynn Valley teen will come into the game newly crowned as the WHL Rookie of the Month. Obviously.