B.C. natives Logan Stankoven and Thomas Milic also suiting up as Team Canada will face Czech Republic in quarterfinal play this afternoon
May 3, 2021 11:40 AM By: Andy Prest 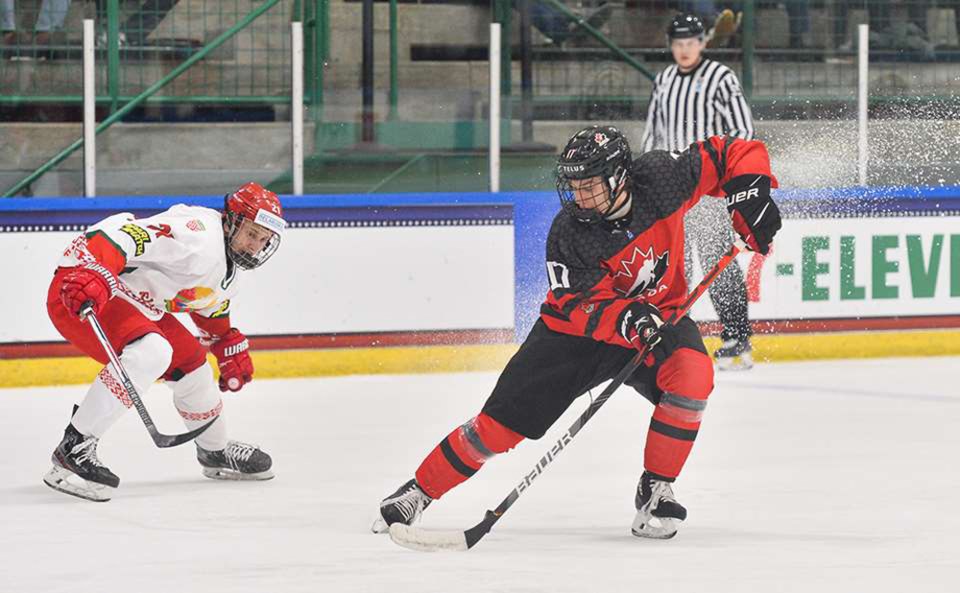 Connor Bedard makes a play for Team Canada at the 2021 IIHF U18 World Championships running April 26-May 6, 2021, in Texas. Ryan McCullough/HHOF-IIHF Images

North Vancouver 15-year-old Connor Bedard has taken his prodigious talents global, showing that he can hang with the best young players in the world at the IIHF U18 World Championships on now in Texas.

Bedard notched four points – a goal and three assists – in four games as Team Canada put up a 4-0 opening round record to finish first in their pool. The Canadians will face the Czech Republic in quarterfinal action today starting at 1 p.m. Pacific time.

This tournament is Bedard’s first appearance for Team Canada in international play. The Regina Pats forward is a full year and a half younger than the next youngest player on Team Canada. Bedard is the only 2005-born player on the U18 team, and there’s only one player – team captain Shane Wright of the OHL’s Kingston Frontenacs – who is born in 2004.

Bedard is the third “double underager” to suit up for Team Canada at the U18 worlds, following John Tavares and Connor McDavid.

Two other B.C. players are on the roster for Team Canada: forward Logan Stankoven and goaltender Thomas Milic.

Stankoven hails from Kamloops and plays for his hometown Kamloops Blazers. He’s an assistant captain for Team Canada and has shown well in the tournament, picking up two goals and three assists in four games.

Milic, who was born in New Westminster, has split time with Benjamin Gaudreau, who has also played well in goal in two wins for Canada.

Today’s quarterfinal match will be shown live on TSN.