Coach Cammi Granato is the gold standard. For young female hockey players, this summer presents a rare opportunity at the North Shore Winter Club: a chance to be mentored by a trailblazer who captained the U.S.
Jun 19, 2019 5:07 PM By: Maria Spitale-Leisk 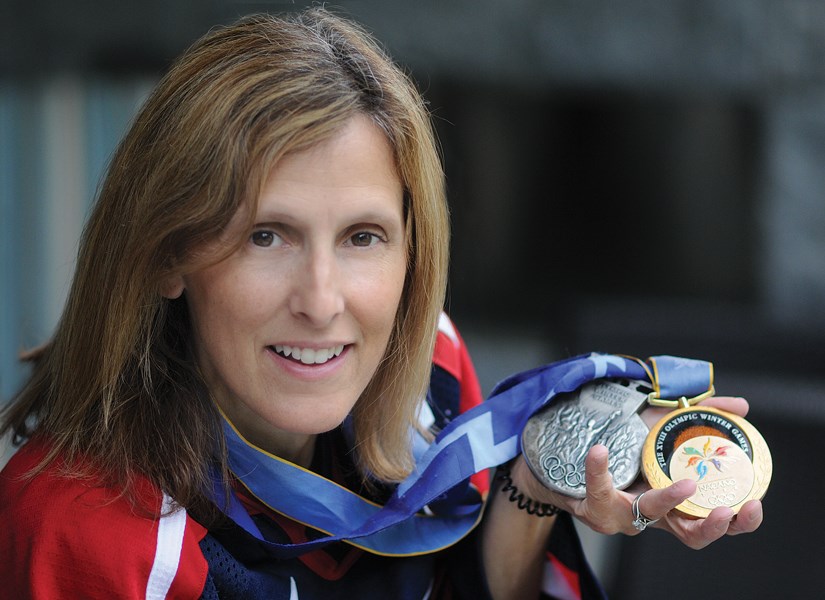 Cammi Granato will host a hockey camp for girls this summer at the North Shore Winter Club. The former U.S. national team star is in the Hockey Hall of Fame. photo Mike Wakefield

For young female hockey players, this summer presents a rare opportunity at the North Shore Winter Club: a chance to be mentored by a trailblazer who captained the U.S. women’s hockey team to inaugural Olympic gold, and also led them to nine world championship medals.

She now calls North Vancouver home, but Granato has left an indelible mark across the hockey world. One of six kids, Granato was born into a large hockey family in a village outside of Chicago.

“My earliest memories were when my Dad would wake me up at 6 a.m. and basically dress me in my hockey gear while I stared groggy-eyed at the cartoons on the TV,” recalls Granato. “I also remember so vividly all the mini stick hockey games I played with my three older brothers.”

One of those brothers is Tony, who had an illustrious career in the NHL. His sister was also determined to be an elite hockey player, refusing to be relegated to goalkeeper during sibling scrimmages.

Gender was never a barrier for Granato – even in the 1970s. Beginning at age five and until she was 16, Granato excelled at forward on boys teams. She was offered a hockey scholarship at Providence College, where Granato was named freshman player of the year.

The ’90s were a fruitful time for the hockey prodigy. Granato led Providence to two league titles, played in every world championship, and on Feb. 8, 1998, she scored the first ever Olympic goal for the U.S. women’s hockey team.

“Walking down the tunnel onto the field at Opening Ceremonies was surreal,” says Granato. “I couldn’t keep my emotions in check because at that moment my dream of being an Olympian was coming true.”

The skilled forward had turned down an offer to try out for the New York Islanders so she could realize that Olympic dream. Four winters later, Granato would return to the world’s stage again, in Salt Lake City.

“Hockey has and is a part of my life every day,” avows Cammi. “My whole family is involved.”

She even married a hockey player – former NHLer Ray Ferraro, who now works as a colour commentator. While husband and wife don’t debate about which one of them is better at hockey, they do go back and forth about current NHL players “and it usually ends up in bet of some sort,” says Granato.

Her niece, Allie – an NCAA Division 1 hockey player – will be joining her on the ice this August as a lead coach for the Cammi Granato Hockey School, which is open to females aged seven to 14.

“The camp will focus on individual skill development, working on the fundamentals like skating, stick-handling, shooting and passing – in a fun and inclusive manner,” promises Granato.

The week-long intensive includes off-ice instruction as well, with Erin Leslie, a former Concordia hockey player who will work with the girls on team building, leadership and the mental side of the game.

The most important hockey lessons Granato has learned along the way that she hopes to impart on the players are “To have fun, understand the meaning of team, build confidence, set goals and dream big!”