The Russian captain came through in the clutch against Sweden.
Nov 9, 2020 11:02 AM By: Daniel Wagner 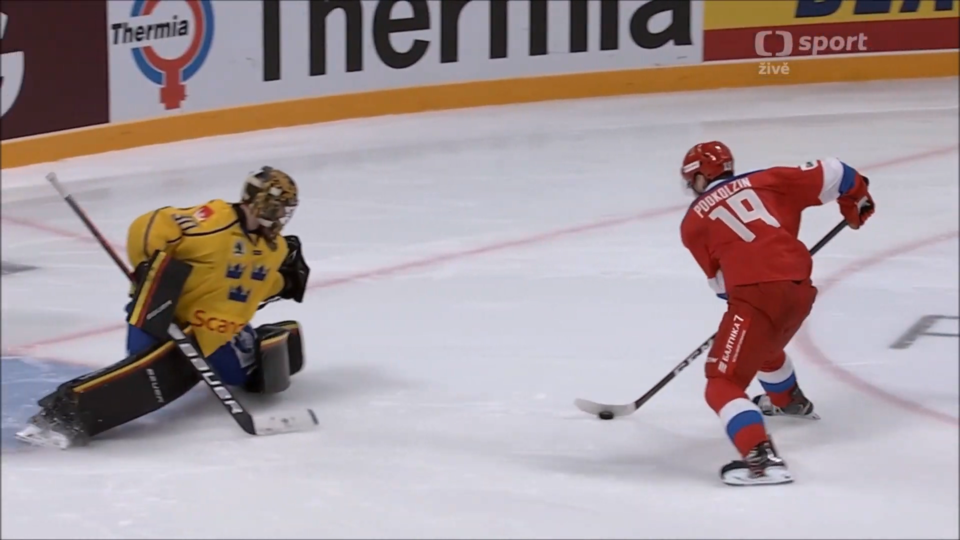 Is Vasily Podkolzin going to be a top-six forward in the NHL? The power forward has a relentless two-way game, pursuing the puck with dogged determination in all three zones, and has all the tools to put up points. And yet, the points frequently refuse to come.

Podkolzin has just 4 points in 19 KHL games this season and just 8 points in 30 KHL games in his draft year. That has some Canucks fans concerned.

The thing to keep in mind is that Podkolzin is still just 19 years old and is playing for a SKA St. Petersburg team that doesn't like to give ice time to teenagers. While it would certainly be nice to see him producing more in the KHL, it's a challenge with the fourth-line ice time that he's been getting.

With the Russian U20 team, however, Podkolzin is getting plenty of opportunities to prove himself. Russia sent their U20 team to the Karjala Cup on the Euro Hockey Tour, typically a tournament for men, not junior-aged players. That means Podkolzin is still playing against men, including some of the top players from the SHL and Finnish Liiga, but is actually getting ice time as Russia's captain.

In their first game against Finland, Russia ran roughshod over the host Finns, who may have regretted taking the team of teenagers too lightly. Podkolzin tallied two assists while playing his typical strong two-way game and leading Russia's forwards in ice time.

Sweden didn't make the same mistake as Finland. They clearly took Russia seriously, playing a much tighter game that didn't see a goal until five minutes left in the third period, when Anton Wedin, who played a few games for the Chicago Blackhawks last season, opened the scoring on a lovely backhand feed from Andreas Wingerli, one of the SHL's top scorers.

Russia's head coach — and former Canuck — Igor Larionov pulled the goaltender with a couple of minutes left and Podkolzin stepped up to help tie the game.

Admittedly, he had a little help. Podkolzin hustled to pressure Carolina Hurricanes prospect Jesper Sellgren, forcing the defenceman to throw the puck away rather than make a clean outlet pass. The rushed clearing attempt, which should have gone out the glass and out, instead hit a referee in open ice, turning the puck over.

Podkolzin jumped on the puck and spotted Toronto Maple Leafs first-round pick Rodion Amirov darting to the net and put the puck on his tape. Amirov made no mistake, tying the score 1-1 with 1:11 left in the game.

It was a great play by Podkolzin, even with the assist from the official. That turnover doesn't happen without his pressure.

3-on-3 overtime solved nothing and the game went to a shootout, where Podkolzin once again came up huge for Russia. Amirov scored his shootout attempt to give Russia a 1-0 lead, then Podkolzin came up third for Russia after a few misses for both teams. His move was perfection, a hard deke to the backhand that sent Swedish goaltender Samuel Ersson sliding right out of the net as he cut back to the forehand for the finish.

Podkolzin's goal proved essential, as Sweden responded with a goal of their own before Russian goaltender, and Nashville Predators first-round pick, Yaroslav Askarov shut the door the rest of the way. That gave Podkolzin the game-winning goal to go with the game-tying assist.

As expected, Podkolzin played plenty of minutes for Russia, with 20:46 in ice time, second among forwards. Fellow Canucks prospect Dmitri Zlodeyev, however, didn't get a single shift as the team's extra forward. He only played in Russia's last game against Finland when the game was well out of reach. That doesn't bode well for his chances of making the World Junior team, but he is still just 18.

Podkolzin's performance shouldn't come as a surprise. As much as he's struggled to rack up points in Russia's top league, he's still dominant in so many different ways and could have a massive tournament at the 2021 World Junior Championships.

"In this age group, Vasily has always been a top player," said Craig Button on an appearance on TSN 1040. "He's always been a difference-maker. You put him around that group and you put him in an environment where he can do his thing, Vasily will do his thing. I think what it does is, it just continues to lend credence to more ice time, more opportunity, Vasily will take advantage of it."

You can watch highlights of Saturday's game between Sweden and Russia: