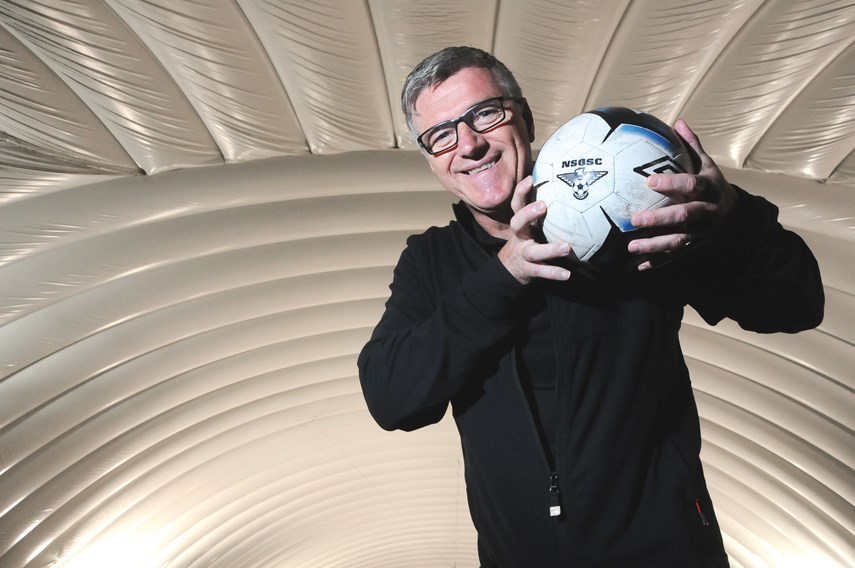 Former national team player and coach Colin Miller, a member of the Canadian Soccer Hall of Fame, has a ball inside the Bubble as he begins his tenure as the technical director of the North Shore Girls Soccer Club. photo Cindy Goodman, North Shore News

In his job interview for the position of technical director of North Shore Girls Soccer Club, when Colin Miller was asked why he wanted to be part of the girls club – he countered with a question: “Why shouldn’t I be here?”

Miller believes the soccer world owes it to girls to let them develop and grow into high-level soccer players – and enjoy their time on the pitch playing the beautiful game.

“The girls’ side of the game has grown so much in the past years especially with the success of the national team,” he said. As part of his vast coaching experience, Miller has helped coach the women’s national team and, while he couldn’t go with them to the 2012 London Summer Olympics, he was “flattered” when they called him from the bus after their bronze-medal finish.

Unfortunately, girls tend to under-achieve in soccer because of lack of belief that they can move to the next level of the game, Miller said.

“We need to continue to keep doors of development and progress open for girls,” he said, adding that “we owe that to the girls.”

Miller has been involved with girls soccer at every level of development and has watched players go on to provincial programs as well as to play at the college and university level.

Success as a girls soccer club, aside from winning games, is about player retention and creating a culture where girls want to be on the field and in the Bubble, Miller explained (NSGSC helped construct and fund the Bubble, an indoor soccer facility near Windsor Secondary).

He wants to raise the level of professionalism of the club so that parents can be confident when they drop off their girls that they are getting a good soccer experience.

In his first few weeks on the job, Miller has sat through dozens of meetings to learn where the club is at. But, he added, he doesn’t want to be the “office guy,” rather, he wants to continue conversations with parents and volunteer coaches on the field to find out the good and bad, and to assess and evaluate in order to launch changes to improve the club and the soccer experience for girls on the North Shore.

“Hopefully by the end of this process, we’ll be a much more professional club,” he said.

After he retired from playing, Miller transitioned to coaching, which he did in Canada and across the pond in England and Scotland.

His most recent coaching stint was with the Edmonton FC where he was the head coach and director of football operations for five years.

As a side gig, Miller does colour commentary on the sidelines and post-game analysis for Whitecaps games for TSN radio.

Miller has spent his professional career between his native Scotland, where he immigrated from in 1975 as a youngster, and Canada. He currently lives in Abbotsford, but has bought a new car for his commute to the North Shore.

The North Shore Girls Soccer Club is one of Western Canada’s largest sports clubs with about 3,000 players. For more information about the club, go to nsgsc.ca.