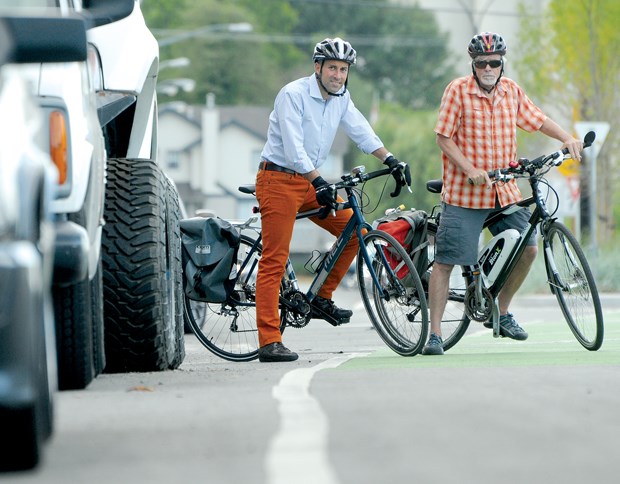 A tangled mess of blocked bike lanes, double-parked semi trailers and vehicles on the sidewalk has become part of the landscape in the 200-block of East Esplanade near the Low Level Road, according to some fed-up businesses owners and cyclists in the area.

That stretch of road is home to a concentration of vehicle repair shops, whose owners say they are just trying to run a business but are being hindered by a parking deficit in the area.

Customers dropping off their vehicles early in the morning before the repair shops open often have to abandon their car or truck on the sidewalk. In other cases semi-trailer drivers are forced to double park and block either a bike lane or a regular lane of traffic on the busy Esplanade corridor.

The parking issue on Esplanade escalated last week when a 75-year-old customer of Krangle Automotive was given a parking ticket by a City of North Vancouver bylaw officer for trying to drop off his vehicle, according to owner Dennis Krangle.

Krangle claims businesses on the block are being treated unfairly as the city cracks down on illegal parking in the area. “She (the bylaw officer) handed the ticket off to my employee and told him, ‘we need to be hard on you,’” said Krangle, who at that point asked for the city’s manager of parking to come down to the garage to discuss the problem.

“What we have now, though, is a Third World free-for-all on parking on the sidewalk and double parking on the street and a blocked bike lane,” said Clinton. “It is not acceptable as it becomes a safety issue. Pedestrians are forced onto the road and bikes into unsuspecting traffic.”

HUB North Shore cycling coalition chair Tony Valente said there is a known bike lane issue that has resulted in close calls between motorists and cyclists on East Esplanade. “I guess the general feeling is that there’s not a lot of enforcement there,” said Valente, adding that the city has acknowledged the problem and is concerned about it.

Something has to change, said Valente, because as it stands cyclists coming off the Low Level Road are often met with a blockade in the bike lane and then are forced on to the street where motorists don’t have time to react or slow down.

“You know, someone is going to get hurt or seriously injured down there, if not killed,” said Valente. “You are basically saying what’s more important is for these companies to park their vehicles illegally in the bike lane and force cyclists onto the roadway.”

Krangle attributes the parking crunch to a number of factors including visitors to new retail businesses in the area and employees of large companies located closer to Lonsdale who are parking in the East Esplanade industrial neighbourhood. “It’s at the point where you come here and almost every (parking) spot is gone,” said Krangle, who is suggesting, among other solutions, the city create a loading zone for the industrial businesses.

Krangle said his business has been financially impacted because he can’t bring in as many vehicles to repair, and motor homes, which he used to fix, are now out of the question.

One block to the west, Centennial Auto Body assistant manager Richard Antunes is equally frustrated by the parking problem that he said has also negatively affected his business. “You got the bylaw guys coming by every 15 to 20 minutes. Is that a fair situation for the businesses here?” questioned Antunes.

Greg Niewerth, whose family owns Rack Stop Car Rack Experts in the 300-block of East Esplanade, said the parking situation worsened after the city reconfigured parking stalls at the end of the 300-block, opening up more spaces in the area. The 18 or so stalls with a 72-hour parking restriction are always eaten up by 7 a.m and empty by around 4 p.m., explained Niewerth.

“We see at lot of people walking around here with ICBC tags around their neck,” said Niewerth.

One of Rack Stop’s delivery guys had to double park last week and, according to Niewerth, encountered a bylaw officer who took a picture and said he was going to send a ticket in the mail — a type of enforcement Niewerth said he has never heard of before.

City of North Vancouver spokesperson Connie Rabold said the city’s bylaws office is aware of the East Esplanade parking issue and is investigating.