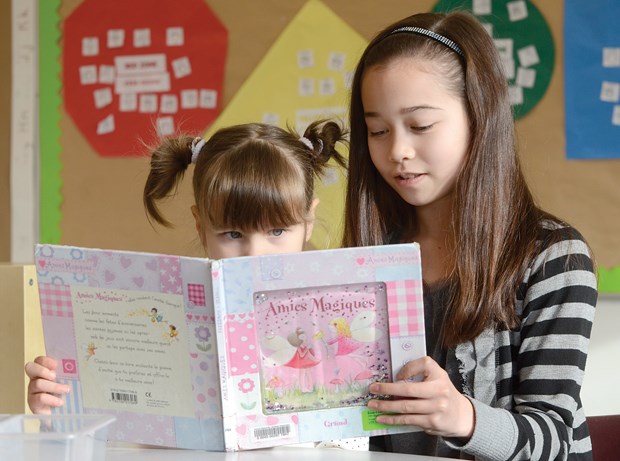 Eve Paterson and Mya Kresnyak tuck into a good livre at Ecole Cedardale in West Vancouver. The elementary school is the first in the province to combine French immersion with an International Baccalaureate program.Mike Wakefield, North Shore News

Ecole Cedardale will be applying for acceptance into the IB program this spring, following approval of the plan from the West Vancouver board of education this week.

If approved, school staff hope to begin teaching the IB curriculum as a candidate school in September.

School principal Michelle LaBounty said Cedardale's staff and students are excited about the prospect about becoming an IB school.

If approved by the International Baccalaureate authorities, Ecole Cedardale will become the third West Vancouver elementary school to offer the curriculum - it is currently offered at Cypress Park and West Bay schools - but the first to combine it with French immersion.

The IB program's emphasis on taking cues from students is appealing to both staff and families of children who attend the school, said LaBounty. "That's where the IB philosophy is really fascinating," she said. "It doesn't assume the teacher is the only one who knows."

Parents whose kids attend Ecole Cedardale tend to be "educated parents," she said. "They're looking for a program that will inspire their children.

Victoria Naranjo is a parent who is enthused about the prospect of Cedardale becoming an IB school. She likes the idea of building on the inquiries of students themselves and developing students who can "articulate and promote change in society," she said.

The decision to pursue an IB designation for Cedardale has followed a lengthy consultation process with staff and school families.

Finding a high-profile "theme" for the school that would help keep and attract enrolment was first identified as a goal a year ago during a review of French immersion programs in the West Vancouver school district.

As a smaller and more-recently established French immersion school, Cedardale has sometimes struggled in the shadow of Pauline Johnson, which has about twice the enrolment of Cedardale's approximately 200 students.

An IB program may keep students at Cedardale and attract students from other areas, said LaBounty. About one-third of the students at the school come from outside of West Vancouver.

After examining several options for the school, including an emphasis on digital technology, an outdoor school and a partnership with a not-forprofit agency, the parents and staff opted to pursue the IB program as the best fit with both the French immersion program and the values of the school community, said LaBounty.

That the IB curriculum is already available in French made that doubly attractive.

If accepted, the school will begin working with the International Baccalaureate organization in September, with the hopes of becoming a full IB school the following year. Once the IB program is underway, parents will pay fees of $400 per year to enroll their children.

As an early French immersion program, the school generally accepts new students in kindergarten and Grade 1 only.

Enrolment for next year's kindergarten class has already happened, but the school is keeping a waiting list, said LaBounty.