But TransLink wish list could remain just that without funding
Jun 15, 2014 12:00 AM By: Brent Richter 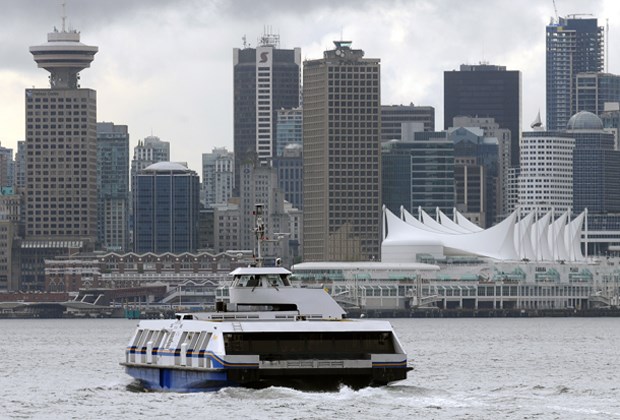 A SeaBus heads toward Vancouver. TransLink's mayors' council has decided adding a third SeaBus should be a priority — if the agency can get more funding.file, North Shore News

The long-promised third SeaBus and B-line express buses between Lynn Valley and Lonsdale Quay, Phibbs Exchange and Dundarave as well as Metrotown and Capilano University could all be coming to the North Shore if the TransLink mayors' council gets its way.

The mayors' council on regional transportation, chaired by District of North Vancouver Mayor Richard Walton, released its list of transportation infrastructure priorities Thursday - along with how they'd like to pay for the $7.5-billion of increased bus

While much of the cost is capital funding that would likely be shared with senior levels of government, the mayors' top suggestion was for the province to hand over a portion of the provincial carbon tax. Transportation and Infrastructure Minister Todd Stone quickly quashed that, on the grounds that it would be dipping into provincial revenue.

"I don't think it should be any surprise that it's in there since we've been advocating for it as the most sensible application of the carbon tax since Premier Campbell introduced the carbon tax seven years ago," Walton said.

While keeping the carbon tax revenue neutral was part of the plan, the goal was to reduce British Columbians' carbon output, partially by encouraging people to use public transit, Walton added.

The mayors have also contemplated a new regional carbon tax, a sales tax directed to TransLink and road pricing as means funding transportation but any new funding method would require voters' approval in the form of a referendum, Stone has said.

But, Walton cautioned, the consequences of failing to fund transit could make

life in the Lower Mainland quite miserable. The region is expected to house another million people by 2040, Walton said.

"If a referendum does not pass - if these funding sources do not appear - that's going to have a significant impact, obviously, on the quality of life and our ability to be economically prosperous," he said.

While the exact costs of how the changes in a

regional carbon tax, sales tax or road pricing would affect the pocketbook of a typical North Shore commuter haven't been crunched yet, Walton said the cost has to be put in context.

"If there's no investment in transit and mobility within the region, people are going to be spending longer in traffic, tied up. There's a tremendous loss of time and value in people's lives anyway." Walton said people

have to measure that value too.

So far, Walton said he has only had positive feedback on the plan, from groups representing a variety of interests.

One of those groups is the North Shore's chapter of cycling advocacy group HUB. Antje Wahl, chairwoman of HUB's North Shore committee, praised the plan, saying it would reduce congestion.