Think forest fires aren't a risk to your North Shore home? Be FireSmart

With summers getting hotter and dryer, forest fires are a risk, even on the North Shore. Here are some of the things you can do to protect your home — and firefighters' lives
Aug 25, 2020 9:52 AM By: Martha Perkins 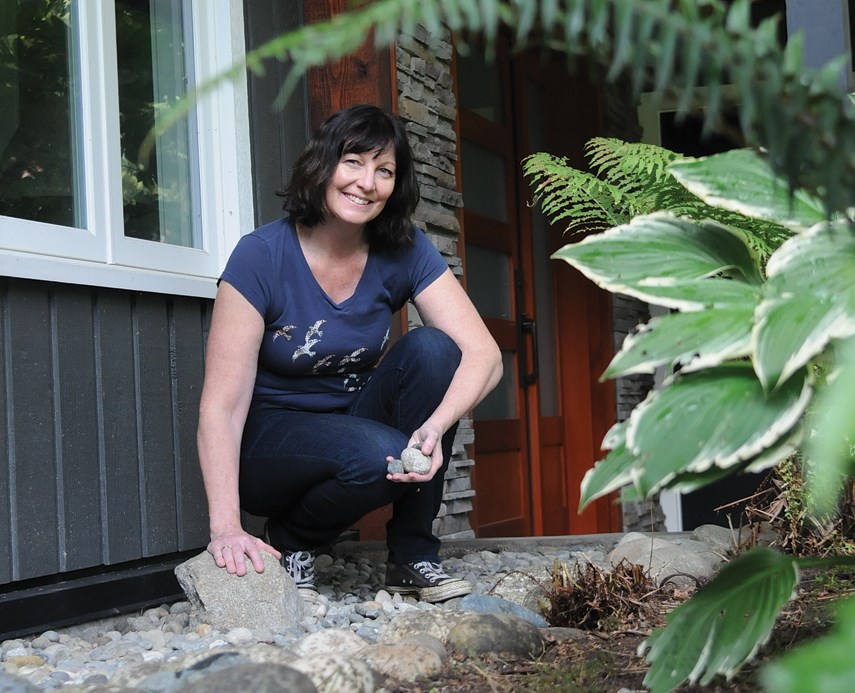 It's FireSmart to not have anything flammable next to your house or under your roofline. That's why UBC forest professor Lori Daniels planted a rock garden next to her North Vancouver home.Mike Wakefield

Lori Daniels needed a new roof. As a fire ecology professor at the University of British Columbia, she knew that roofing material is often a key factor in whether a house survives a nearby forest fire.

“When houses burn in a forest fire,” she says, “it isn't necessarily that the forest fire burned up to the side of the house and the house was consumed in the flames. It's more often that fire-burning embers and sparks are blown by the wind and land on the property. And what they have to land on is something that either burns or doesn't burn.”

A metal roof doesn’t burn. So that’s why her North Vancouver home has a shiny new metal roof.

You don’t necessarily have to replace your roof to give your home a better chance of surviving a fire. Some FireSmart protocols simply require an investment of time. The District of North Vancouver has some very helpful tips on how best to protect your home. Here are some of the ways the Daniels family implemented them.

Clear your roof of debris

Tree branches and leaf fall are perfect kindling for an ember that is blown off a nearby fire. Make sure you regularly clear your roof and gutters of plant materials.

“Cedars are beautiful but they are highly flammable. It’s really critical to reduce the amount of cedar right around our homes. Also, make sure that trees and branches are trimmed back so they're not overhanging your roof line,” Daniels says.
The district also advises against planting pine, spruce and junipers.
Two years ago, she had all the trees and shrubs in her yard trimmed. Because it’s been so wet, they’re now due for another trim. “I have them booked to come in September to take down some branches and to take down a tree that's grown up between my house and my neighbour's. It is a fire hazard and so it's coming down this fall, simply because we can't keep up with it; the more it grows, the more it puts her roofline at risk.”
When you trim your trees, the district recommends three metres' clearance from crown to ground, as well as keeping them three metres away from your house.

Reduce the amount of flammable material right next to your house.
“I wanted to make sure that I didn't have plants that, in the case of fire, would heat the underside part of the house and contribute to it potentially igniting. We put rock gardens in and around parts of the house. Our actual garden starts two or three feet out, away from the overhangs where there's no chance of contributing to a fire. Those were really easy landscaping choices.”
Non-combustible mulches are another option.
While you’re at it, clear the sides of your house of anything that could become fire fuel, such as folding chairs, stacks of firewood or anything else you meant to put away in the garage.

This is especially important during a drought when grass dries and becomes more flammable.

In the District of North Vancouver, the building code already requires new home construction to be FireSmart. That includes using materials that are fire-resistant.
It can be as subtle as the mesh side in our soffits and other openings, Daniels says. “Be aware of anything that is open to the environment where a spark could blow in and get into your insulation or get up into your attic.”

“In fairness to the firefighters who put their lives on the line to protect our property, we have a little bit of a responsibility to do our due diligence as well,” Daniels says. “Making sure that there are no ignition sources is really critical. [Through my choices] I want to be an example for my neighbours. As well, my mortgage is probably the biggest investment in my lifetime so I’m going to protect it.”


Martha Perkins is the North Shore News’ Indigenous and civic affairs reporter. This reporting beat is made possible by the Local Journalism Initiative.