The Sewell name is synonymous with Horseshoe Bay and now the family with an 85-year history in the seaside enclave is planning a major redevelopment including a 171-unit residential waterfront complex.
Aug 2, 2015 5:00 AM By: Maria Spitale-Leisk 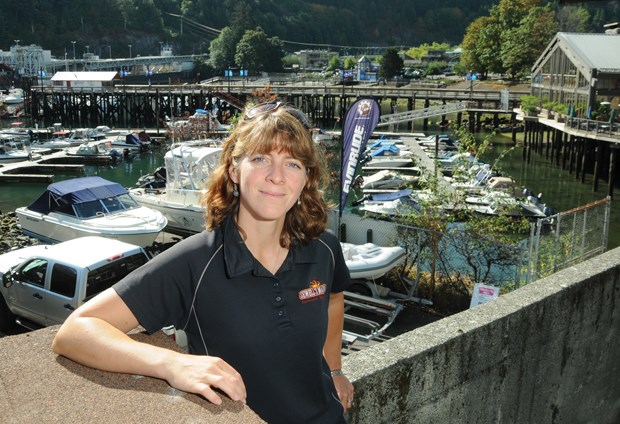 The Sewell name is synonymous with Horseshoe Bay and now the family with an 85-year history in the seaside enclave is planning a major redevelopment including a 171-unit residential waterfront complex.

Lured to Horseshoe Bay in the 1920s by his fishing hobby, Dan Sewell Sr. built a community marina, which over the years has evolved from just providing moorage space to become somewhat of a tourist destination for recreational boating.

Today the marina is managed by a forth generation of Sewells who are attempting to make a foray into residential real estate. The Sewells recently submitted a formal rezoning application to the District of West Vancouver to repurpose their large parking lot behind the marina with six buildings and four levels of underground parking.

Megan Sewell, general manager of the marina, told the North Shore News this week the redevelopment is about financially sustaining the marina for the future, and the family looked at golf course and ski resort models that incorporate residential components.

“We definitely don’t want to get into the real estate game,” said Sewell. “People don’t realize the amount of costs that go into the infrastructure around a marina. We need to find some cash flow from somewhere.”

The site is located at the bottom end of Nelson Street and is accessed by a ramp that leads to The Boathouse restaurant, which will remain if the proposed development goes ahead.

Preliminary plans show 171 residential units to be spread throughout six buildings ranging in height from two to nine storeys, and with floor plans varying from one bedroom to three bedrooms and a den.

Sewell’s has partnered with Vancouver-based developer Westbank Projects Corp. and architect Paul Merrick for the project. Westbank is behind such well-known projects as the Shangri-La and the Fairmont Pacific Rim hotels in Vancouver, while Merrick is known for West Coast modern style designs.

The plan to redevelop Sewell’s has been in the works for at least seven years with already plenty of public consultation. Merrick formed his vision based on feedback from Horseshoe Bay residents, business owners and other stakeholders.

The overarching concept is to create a quaint seaside public space with a piazza similar to what is seen in coastal European towns. Merrick included photos of Positano and Cinque Terre in Italy as part of the rezoning application to show where the inspiration comes from.

There is 15,000 square feet of commercial that’s also being proposed by Sewell’s, but with the marina already consuming 10,000 square feet of that, Sewell said the plan is to not add much more. “We don’t want to be taking away from the commercial that’s in Horseshoe Bay,” added Sewell. “We just want to be able to augment it, support it, add in a little bit of what might be missing.”

Included in project plans are 469 underground stalls, 225 of which would be set aside for marina clients and commercial uses. Sewell said the parking stock being proposed is sufficient and exceeds West Vancouver’s parking bylaw requirements.

The project has the potential to revitalize Horseshoe Bay and bolster businesses in the area, figures Sewell, who explains how area businesses are heavily reliant on ferry traffic and suffer during the shoulder season.

“So having a little bit more density where there would be more people available to use doctor’s office and the dentist and the hairdresser and everything else that Horseshoe Bay has to offer, I think will help a lot,” said Sewell.

Holly Kemp, manager of Troll’s restaurant, another Horseshoe Bay stalwart, said the Troll family supports Sewell’s plans for many reasons including the potential to sustain businesses in the area.

Kemp said the residential units would offer an opportunity for longtime Horseshoe Bay inhabitants to downsize and stay in the community.

Sewell’s application comes at the same time Horseshoe Bay is undergoing an extensive streetscape study. Kemp, who is president of the Horseshoe Bay Business Association, said the revitalization is long overdue. “We need some conformity when it comes to what the streets look like in the way of awnings and lighting,” said Kemp, who estimated it’s been 35 years since the streetscape was extensively updated.

The Sewell’s rezoning application will come up for initial discussion at the first meeting of  West Vancouver council in September.