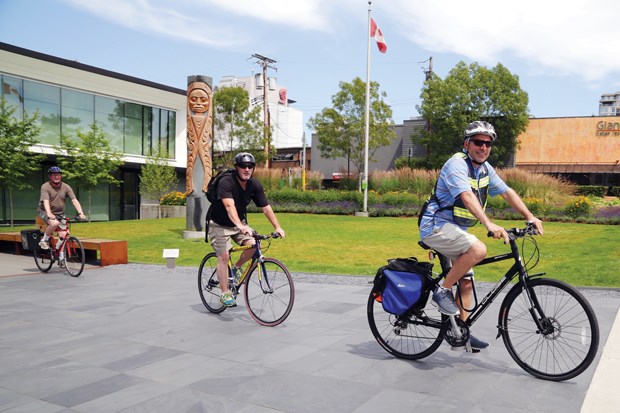 Traversing some of the North Shore's busiest roads by bicycle is about to get a bit easier as the province has chipped in almost $500,000 for bike lane and multi-use path projects in the City and District of North Vancouver.

The largest single grant in the announcement is $240,000 for a multi-use pathway along Mount Seymour Parkway from Lillooet Road to Seymour Boulevard. Once complete, the paths will link up with existing bike routes to the east and west as well as the Seymour River Greenway trail and connections to Phibbs Exchange and Ironworkers Memorial Second Narrows Crossing, now undergoing heavy refurbishment to add wider sidewalks.

District taxpayers are on the hook for another $240,000 to complete the project.

Lynn Valley Road will be getting marked bike lanes between William Avenue and Highway 1 with an aim to providing better connections to the Lynn Valley town centre. The province's $100,000 grant will help offset the $316,994 cost of the project, which the city is also working on.

The city meanwhile will be getting $100,000 towards its project to build a 2.5-metre wide, multi-use asphalt path at sidewalk level on the south side of Third Street between Forbes Avenue and West 2nd as well as 1.5-metre-wide bike lane on the north side. The roadway will see curbs relocated, lane widths adjusted and the entire roadway paved, with a total budget of $790,000.

The announcements are welcomed by cycling advocacy group HUB. The speed of cars on Mount Seymour Parkway makes cycling there for only the "very brave," said North Vancouver HUB spokeswoman Heather Drugge, and Third Street is one of the most dangerous spots for cyclists.

"You're riding right against the curb with practically no shoulder at all and because it's a truck route, you could have an 18-wheeler right beside you and it's quite terrifying,"

Drugge said. "That multi-use path is going to be extremely well used and appreciated by both pedestrians and cyclists."

The improvements will help encourage people of all ages and abilities to spend more time on bikes and less in cars, Drugge said.

Also on the to-do list for cycling infrastructure is safety improvements along the Stanley Park causeway where a North Vancouver woman was killed in 2013.

After doing surveying for the work in February, the province and Vancouver Park Board and city staff have being working on design options. The province plans to make its plans public this fall and collect public feedback before starting construction in 2015.