North Shore cyclists are eager to get their first look at planned safety improvements to the Stanley Park Causeway. The Ministry of Transportation and Infrastructure is debuting its preliminary designs for the 2.
Nov 28, 2014 12:00 AM By: Brent Richter 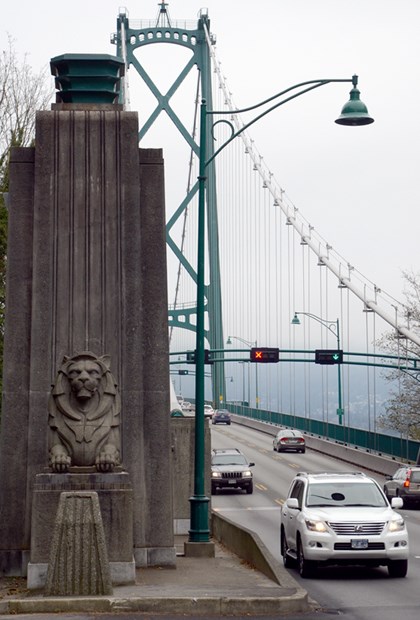 The end of the Lions Gate Bridge and start of the Stanley Park Causeway.file, North Shore News

North Shore cyclists are eager to get their first look at planned safety improvements to the Stanley Park Causeway.

The Ministry of Transportation and Infrastructure is debuting its preliminary designs for the 2.2-kilometre stretch between the Lions Gate Bridge and Lost Lagoon at a public consultation meeting on Tuesday afternoon.

"We haven't seen the actual design but of course we had a list of things we wanted to see in the design," said Heather Drugge, a North Shore spokeswoman for HUB, the Lower Mainland cycling advocacy group. "We're totally expecting it would at least include a barrier between the vehicle traffic and the actual sidewalk, which would obviously be a massive improvement."

In May 2013, a 61-yearold North Vancouver woman died when she fell from her bike and into the path of a West Vancouver bus on the causeway. The incident spurred a petition from cyclists and fast-tracked safety improvements from the province, the Vancouver Park Board and the City of Vancouver.

The preferred option primarily focuses on widening the sidewalks and installing safety fencing to improve safety for cyclists and pedestrians, according to the province.

Still, cyclists would like to see some form of separation between themselves and pedestrians who move much slower and are often unable to hear cyclists' bells. The causeway has become more popular for both in recent years, leading to more conflicts between cyclists and pedestrians, Drugge said.

Also of concern is the construction schedule, with the Ironworkers Memorial Second Narrows Crossing partly out of commission for its sidewalk widening project. The east sidewalk is expected to remain closed until January and the west sidewalk is scheduled to close soon after.

"That could be awkward but at the same time, I'd rather see the changes go forward," Drugge said.