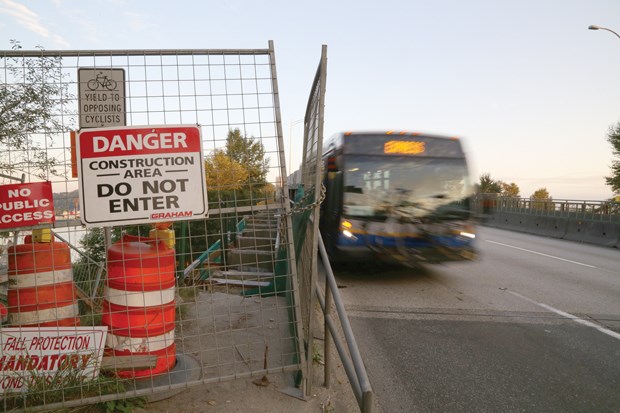 There's a stall on the bridge and for once, it's not a semi in the centre lane.

The Ministry of Transportation and Infrastructure's $20-million project to widen the sidewalks of the Ironworkers Memorial Second Narrows Crossing is about two months behind schedule after engineers discovered they would need custom fabricated steel to finish the job.

"It's basically a rehab project. When you open up a bridge, you find things that aren't what you expect," said project manager Jay Porter. "As we were working, we learned that we need to get some custom components made up."

Specifically, the contractor needed to get new steel forebeam extensions that will support the new sidewalk and fence.

"Basically it means everything," Porter said. "Until we get that done, the sidewalk and fence won't start going in."

The ministry is replacing the original 1.2-metre sidewalk with a 2.5-metre one and adding a three-metre high fence made of galvanized steel posts designed specifically to prevent people from climbing over.

The bridge's east sidewalk is now forecast to reopen in October now instead of August..

Porter said the work will not increase the project's cost.

While that portion of the project has been delayed, the contractors have been replacing street lamps and getting a head start on the west sidewalk, though it will remain open.

Other than this one hiccup, everything is coming along well and work on the east side will resume shortly, Porter said.

"Once the support and reinforcing system is in, you'll start to see the sidewalk and fence go in very quickly. You should start seeing that in September and October," he said.

Cyclists and pedestrians meanwhile, have been forced to share the west sidewalk or find a new way over Burrard Inlet.

News of the delay has been taken in stride by members of Lower Mainland cycling advocacy group HUB, according to spokeswoman and North Shore resident Heather Drugge.

Cyclists are still just glad the notoriously narrow sidewalks are being replaced at all, she said.

"We're grateful for that improvement in any case. Whenever it comes, that's excellent," she said.

"It's terrible for anybody who is using it (now) but it's only temporary and we all pretty much have a lot of patience for something that's going to improve our lives anyway."