After months of construction and restricted access, the $20-million project to widen the sidewalks and install suicide prevention fences on the Ironworkers Memorial Second Narrows Crossing is finally done.
Sep 4, 2015 5:27 PM By: Brent Richter 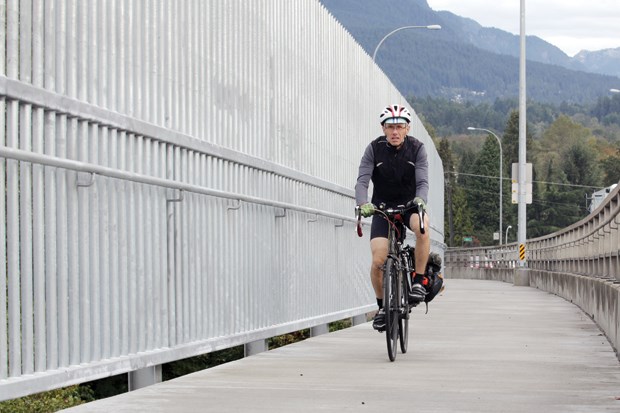 Yoel Gutman cycles along the newly opened west sidewalk of the Ironworkers bridge during Friday morning rush hour. The avid cyclist who has been commuting across the bridge for 15 years says the wider sidewalks are a major improvement. photo KEVIN HILL

After months of construction and restricted access, the $20-million project to widen the sidewalks and install suicide prevention fences on the Ironworkers Memorial Second Narrows Crossing is finally done.

The Ministry of Transportation and Infrastructure opened the gates on the west sidewalk just in time for the evening rush hour Thursday.

North Vancouver-Seymour MLA Jane Thornthwaite said completing the project is a step towards one of the main goals she had when entering provincial politics in 2009 — resolving the transportation issues that plague the bridgehead and Seymour area.

“I’ve been lobbying for lots of changes, not just the bridge safety issue, but also the on-ramps and off-ramps and the whole transportation infrastructure project that we got approval for earlier this year,” she said. “I think safety is one of the key issues that prevents people from actually getting on a bike. If we can make the cycling infrastructure safer for people, then they will be more encouraged to get on a bike and then that would obviously alleviate one extra car on the road,” she said.

The new 2.5-metre sidewalks are a “fantastic” improvement over the old, narrow bumpy ones, said Tony Valente, HUB spokesman.

“I’ve been cycling across that bridge now since 2009… and it was rough. It just wasn’t safe,” he said.

In October 2012, a Langley man was assaulted by a fellow cyclist after a near-collision on the sidewalk. Police called it a case of “path rage.”

Valente said he’s seen an increase of people riding on the widened east sidewalk since it opened in February and he expects having the west sidewalk open will encourage even more cyclists.

According to the province, the bridge currently sees about 148,000 pedestrian and cyclist crossings per year.

The fence’s design hasn’t been universally popular with some critics who say it is a view spoiler. Thornthwaite said drivers should be focusing on the road, not the view — and the fence was designed with safety in mind.

The B.C. Coroners Service recommended that the Ironworkers, along with four other Lower Mainland bridges, be retrofitted with suicide prevention barriers following a report from the coroner’s child death review unit in 2008.

“The actual design of the fencing was studied and that was the conclusion that the experts came up with,” Thornthwaite said. “You can still see through it but you can’t climb it. Studies have said that, for people who may have suicidal tendencies, having a deterrent like that can prevent them from doing it and hopefully they can get help afterward.”

It’s too soon to say whether the new fence has deterred potential suicides, according to the B.C. Coroners Service, but the office will be closely monitoring it over the next year.

Such a great improvement to the #bike #commute over 2nd narrows #northvan Thank you!!! (Not a bad #sunset either!) pic.twitter.com/eKmBB28VIy