You might want to go check on your bicycle. North Vancouver RCMP say they’re disappearing in record numbers.
Sep 4, 2015 12:00 AM By: Brent Richter 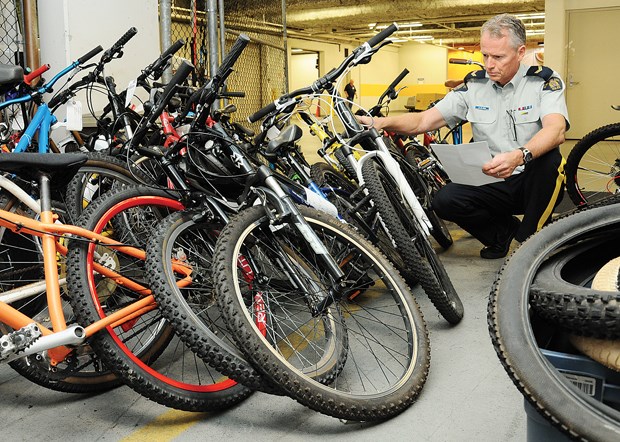 You might want to go check on your bicycle. North Vancouver RCMP say they’re disappearing in record numbers.

There have been 182 reported bike thefts in North Vancouver so far this year compared to a total of 132 in all of 2014 — a 38 per cent increase.

The hardest hit neighbourhood has been Lower Lonsdale, where the SeaBus is used as a de facto getaway vehicle. Other hot spots have been Capilano Mall and Lynn Valley, especially for mountain bikes.

Most of the stolen bikes wind up on the Downtown Eastside, where they are sold for about 10 to 15 per cent of their real value.

“People are stealing everything that’s locked, and not. They’re using them for transportation of other stolen property, to get around, or to sell for drugs,” said Cpl. Richard De Jong, North Vancouver RCMP spokesman.

Really high-end bikes are worth more sold for parts and so they disappear into chop shops, De Jong said.

Neighbouring jurisdictions Vancouver and West Vancouver are also noticing a growing trend in bike thefts. Vancouver had 2,387 cases in 2014 compared to just 1,528 in 2011 — and 2015 isn’t looking much better.

“Unless things change drastically, it appears, unfortunately, that we are on track to have an increase yet again this year,” said Const. Brian Montague, Vancouver police spokesman.

“This is nothing,” De Jong says, opening up the cage full of unclaimed bicycles in the bowels of the North Vancouver RCMP detachment. There are also plastic bins full of handlebars, cranks, wheels and seats.

Bikes picked up by the police, either because they’re found abandoned or seized from suspects arrested for possession of stolen property, have their serial numbers logged and stay in the RCMP system for about 90 days. After that, they’re likely to go to the auction block. There were 151 turned over to the City and District of North Vancouver for last year’s annual auction last year.

Sometimes, savvy theft victims will go online and sleuth out their own bikes being resold. Asked if residents should attempt to retrieve them on their own, Wilson is clear.

“No, no, no, no, no,” he said. “We never suggest that. If they do locate it on eBay or Craigslist, call us up. We’ll certainly try our best to assist them in getting it back.”

People who buy a bike that’s been stolen, whether they know it or not, could be charged with possession of stolen property, he added.

Preventing bike theft is a lot harder than buying a good lock, De Jong said. Cable locks are easily snipped and U-locks have their own vulnerabilities.

“You can get into any lock with a little can of Freon. You can smash any lock — even case-hardened ones,” he said. “You can go from a $10 lock to a $120 lock. It’s going to take the bad guys a little more time and effort to get in.”

To combat the growing problem, De Jong recommends “being a recording star” — logging your bike’s serial number and taking photos so it will be easier for police to return should it turn up.

Tony Valente, spokesman for cycling advocacy group HUB, knows all too well the agony of losing a bike, having recently had one stolen. Valente said he hopes to see the private sector offer more secure bicycle parking options, including bicycle valet parking.

“The bike valet means you don’t have to bring your lock with you. It really encourages cycling to your business,” he said.