The District of North Vancouver is joining the province and federal government in starting a $50-million project aimed at undoing the traffic quagmire at the Ironworkers Memorial Second Narrows Crossing bridgehead.
Nov 14, 2014 12:00 AM By: Brent Richter 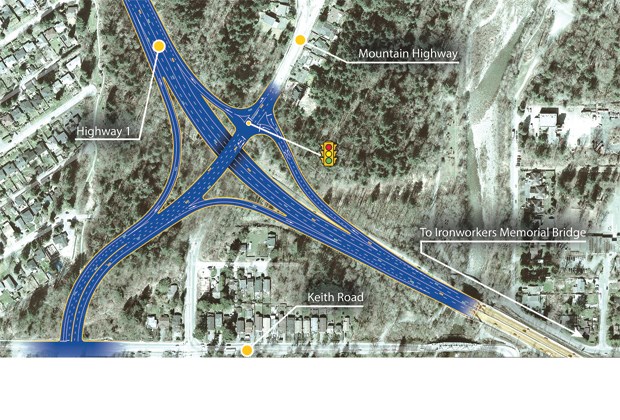 An artist's rendering of new the new Mountain Highway interchange

The District of North Vancouver is joining the province and federal government in starting a $50-million project aimed at undoing the traffic quagmire at the Ironworkers Memorial Second Narrows Crossing bridgehead.

Representatives from all three governments met in a North Vancouver traffic loop Wednesday to unveil plans for a new interchange on Highway 1 at Mountain Highway.

Under the conceptual design, Mountain Highway will get a new four-lane overpass, linking it directly with Brooksbank Avenue, plus new on-ramps onto the Cut, northbound and southbound. Mountain Highway will also be home to a new off-ramp from the southbound Cut. That should make for an easy connection to the Fern Street overpass via the widened Keith Road bridge, which the district is currently working on, according to Gavin Joyce, the district's manager of engineering. When completed, the project will have the effect of separating bridge traffic from eastwest traffic, which currently jockey for the same space.

"We think it will be significant," Joyce said. "It's not going to solve all of the problems but we believe 30 per cent of the traffic that's coming down the Cut is actually local traffic and it's trying to get through. If we can get it off (sooner), it's going to make a great deal of impact."

The province is putting up the biggest pot of funding, at $23.5 million, which North Vancouver's two Liberal MLAs Naomi Yamamoto and Jane Thornthwaite were on hand to announce Wednesday. North Vancouver Conservative MP Andrew Saxton joined to declare $12.5 million in federal funding for the project and the district is putting up $14 million for its share, including $5 million spent buying the shuttered Keith Lynn alternative secondary from the North Vancouver school board. The school site sits where the new overpass will go.

"When we think about all the things that are important to us, time is probably one of the most important things. This will save people time. What a precious gift to give people on the North Shore," Yamamoto said.

But those hoping for a quicker commute any time soon can ease off the gas. The project's targeted completion date is the spring of 2018. The Ministry of Transportation and Infrastructure is aiming to get the technical design work done over 2015.

During that time, engineers will be looking into what types of walking or bicycling infrastructure the new interchange will accommodate and district staff will be "exploring opportunities to replace, enhance or protect affected areas and uses, including trails," according to district spokeswoman Jeanine Bratina.

Redoing the Mountain Highway interchange is the first step in a three-part project that will see the Mount Seymour Parkway and Main Street/Dollarton interchanges redesigned. The total cost is estimated at $140 million.

Wednesday's announcement has been years in the making, said David Davey, a Blueridge resident and retired engineer who volunteered on the working group that helped come up with the design.

"I think it's going to be a great improvement. It's not going to solve all your problems. We still have the highway cutting the municipality into two halves but given all the restraints, it's a great solution," he said.