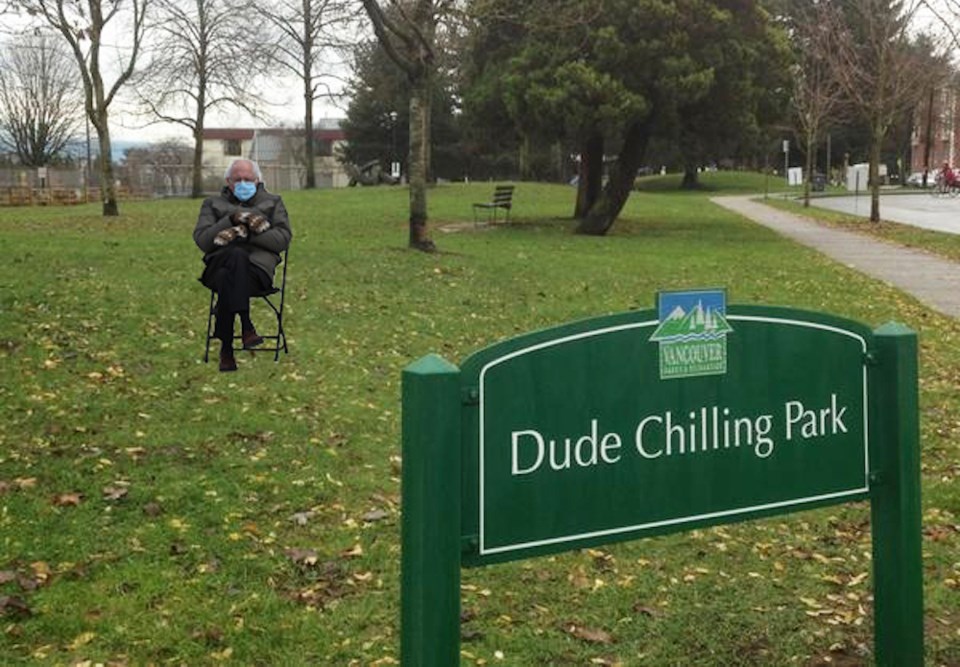 A viral image of American politician Bernie Sanders has shown up in numerous photographs from around the world.  Photo courtesy of V.I.A. reader Mandy Yu.

A viral image of American politician Bernie Sanders has shown up in numerous photographs from around the world.

Sanders sought the Democratic presidential nomination in 2016 and 2020, but came second in both campaigns. Despite this, the Vermont senator garners support from a loyal following in the United States and has fans across the globe.

During President Joe Biden's inauguration ceremony, Sanders was photographed sitting cross-legged and wearing an especially cozy-looking pair of mittens and a puffy jacket. He also donned a blue face mask.

Over the past couple of days, people from across the Lower Mainland have shared the viral image in social media posts, which feature the popular politician in Metro Vancouver places or alongside locals.

Beloved Vancouver-born actor Ryan Reynolds also got in on the fun, sharing the Sanders Snap next to Deadpool in an Instagram post.

Bernie Sanders in and around Vancouver

Have a look at some of the best Metro Vancouver takes on the popular Sanders meme.

Feel the Bern! I did not have Bernie Sanders becoming a meme on my inauguration bingo card. 😂 #feelthebern pic.twitter.com/g6p5bPnX3k

It's all about balance, really. pic.twitter.com/yaO5ZPFEKm

This ones especially for you Lynda! pic.twitter.com/VKnYItNpSi

Sure, Elias Pettersson and Jake Virtanen are struggling right now, but at least they have Bernie Sanders by their side during press conferences. #Canucks pic.twitter.com/iGVmfvOZRn

Are we too late to the game? Hahahaha!

Bernie is waiting for the market to reopen! We told him to go home and put it in his calendar to come back April 1st at 3pm. Just like Bernie, you should pop April 1st at 3pm in your calendar!#berniesanders #newwest #eatlocal #shoplocal pic.twitter.com/fgayGwTP7G

Why look at that - Bernie is taking advantage of the beautiful green space in Barclay Heritage Square around Barclay Manor on this sunny but brisk day!#wesn #barclaymanor #olderadults #westend #park #vancouver #berniesanders @WestEndCC @ParkBoard pic.twitter.com/j20iDJkATg

Glad and proud to see #BernieSanders has somehow found his way to the #RoseGarden of my university ; ) @UBC #BernieSandersMittens #UBC #Vancouver pic.twitter.com/U4OkOcwmjX

Today I said goodbye to @GoodMurphyWVPD and welcomed a new partner to my team. #BernieSanders pic.twitter.com/db37HXdib2

Someone has drawn a hilarious interpretation of a Metro Vancouver map
Jan 1, 2021 7:34 PM