The man behind the map: Here's who drew that hilarious take on a Metro Vancouver map

Last week, Vancouver Is Awesome shared a comical illustration someone had drawn on top of a Metro Vancouver map. However, the artist was unknown at the time, since they shared the creation online via their Reddit account.

Since sharing the aforementioned doodle, numerous readers commented on the drawing, with many people sharing their own interpretations of the map.

Now, a local man, Josh Loewen, tells V.I.A. in an email that he is behind the quirky sketch.

"I just saw it trending on the site now. Hilarious. I posted it on my Twitter (@joshtastic) but it got so little love that I got embarrassed and deleted it," he writes.

Loewen was an artist for many years but now he runs a digital marketing agency called The Status Bureau in Gastown. He says the inspiration for the drawing came from something similar on Reddit for another country.

"I took a look at the map of Vancouver and thought, "Damn, is that a horse dude?" It came out of being dreadfully bored over the holidays due to being locked inside," he explains.

"I'd love to see what other people could come up with. I will be doing some more drawings to see if there are any other ridiculous natural shapes that come out of the outlines. My kids will have a crack at it as well."

Incidentally, Loewen tells V.I.A. that this isn't the first time he's appeared on the site, either.

"The last drawing I did that made it on your site was the shirt for Stop Podcasting Yourself waaay back in 2011," he notes. 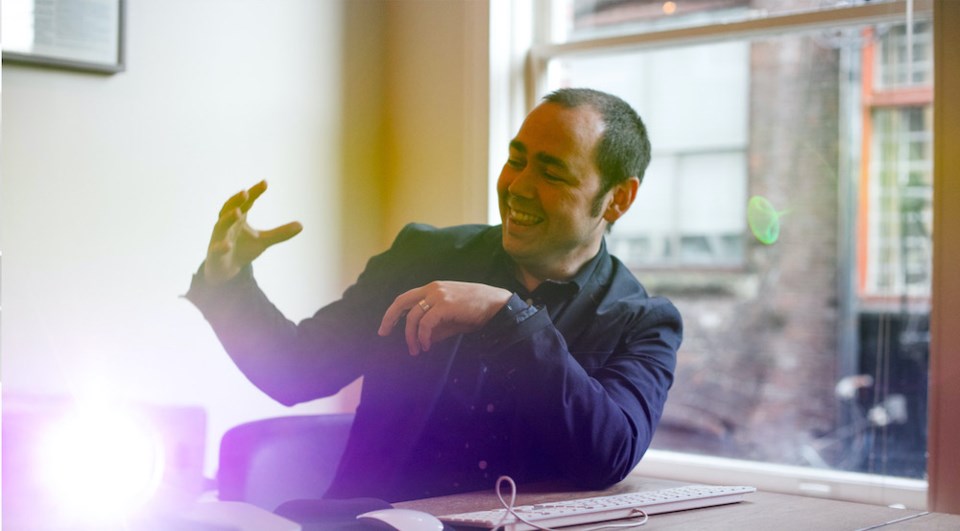 Josh Loewen at his desk in Vancouver. Photo courtesy of Josh Loewen

A hilarious interpretation of a Metro Vancouver map

A few people commented on Reddit that Loewen's creation looks like a number of celebrities including Tom Cruise, Nicolas Cage, Guy Fieri, and even Ron Jeremy.

Some people were simply taken aback by how odd the drawing is, while one person quipped it was "An absolute masterpiece of our generation."

Another person adds that they like the creature/man's hoof, while someone else can't get enough of his "tooth sparkle."

At the time of this writing, the drawing has been up-voted 211 times.

Someone has drawn a hilarious interpretation of a Metro Vancouver map
Jan 1, 2021 7:34 PM