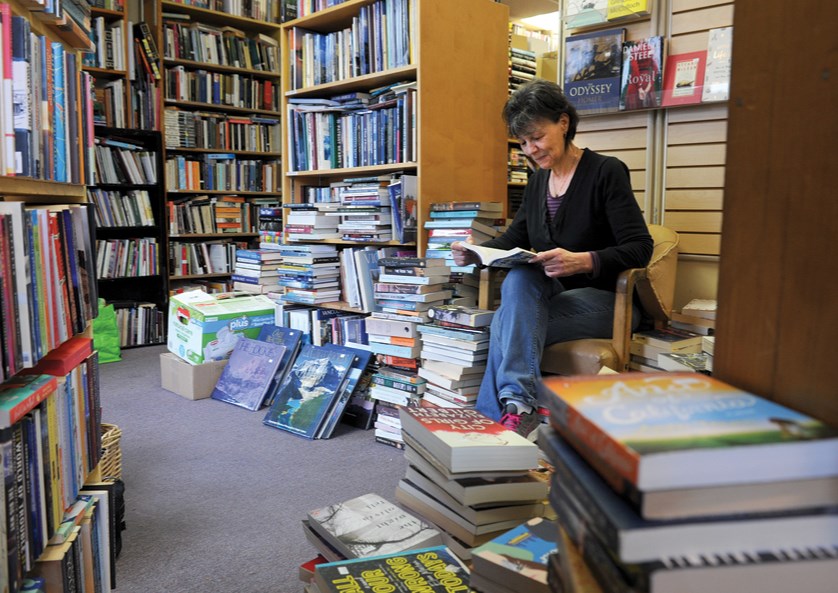 Dalyce Ayton, owner of Booklovers Used Books in North Vancouver, says the amount of fiction she’s sold this year compared to previous years has almost doubled. photo Mike Wakefield, North Shore News
People have been sitting down with a good book more than ever this year, but in the battle between memoirs and murder mysteries readers have been more inclined to crack open the latter.

Whether it was hard-boiled detectives or songs of ice and fire, many booksellers saw their customers gravitating more and more toward the fiction section this year as COVID-19 made the real world more and more challenging to deal with, according to purveyors of paperbacks and hardcovers.

Dalyce Ayton, who owns Booklovers Used Books in Lower Lonsdale, says that in a normal year her sales usually constituted a fairly even split between fiction and non-fiction tomes.

But that changed, she says, during the first lockdown earlier this year when a sense of collective anxiety set in and people were compelled to stay inside with many business owners left mulling whether to ride it out or shutter entirely.

“Now, I would say it’s 95 per cent fiction,” said Ayton, on the sales of fiction making up her very real bottom-line. “It’s an escape from the everyday world that we’re living in that isn’t so pleasant right now.”

Ayton, who has owned her 2,000-square-foot used bookstore on Third Street for 12 years, normally carries a pretty general selection of books – from children’s lit and cookbooks, to volumes of philosophy and vintage magazines.

She closed her store for a two-week stretch at the beginning of the pandemic and has since reopened by-appointment only.

While the pandemic has caused everyone a lot of uncertainty, one thing that Ayton is sure of is she can’t keep certain reads on the shelf, especially if it’s part of a series with many entries, such as Robert Jordan’s classic The Wheel Of Time series or Sue Grafton detective novels which currently start with “A” Is for Alibi and work their way up.

“People are reading a lot more – fiction over history and non-fiction and the kind of stuff they used to buy,” said Ayton, who stocks her store using a trade-in program. “For a lot of people, books are a very important part of their lives.”

While 32 Books in Edgemont Village hasn’t seen such a major shift in consumer taste when it comes to fiction vs. non-fiction, fictional book series – as well as books by authors exploring Indigeneity, feminism and other important and current topics – have been extremely popular throughout the pandemic.

“The mystery section has stayed incredibly stable,” said Chris Cox, manager at 32 Books, adding that while the store has remained open with COVID-19 safety measures in place they’ve also continued their book delivery program which was started earlier in the pandemic.

And with the exception of Emily St. John Mandel’s pandemic-frenzied Station Eleven, most dystopian titles have not being faring super well either. That’s not say that readers are solely looking for easy reads, said Cox, but they are seeking books that transport them to different places and feature stories far removed from this current moment.

“Lighter books, but well-written,” she noted. “People are buying. Our clientele has been exceptionally good to us.”

Sheila Ross, an English instructor at Capilano University, said she mostly rejected the term escapism as it relates to literature because of its diminutive implication, but she did say that reading fiction could offer respite from a challenging reality.

“There’s a pretty good reason to want to dip into novels that give us radically other possible worlds to abide in for a while as a kind of escape,” said Ross.

While reading isn’t necessarily a substitute for today’s challenges, it can offer people a space for letting go of ourselves, said Ross. “It’s an interesting kind of forgetting – it’s a precondition of reading that you forget yourself while reading,” she said. “You escape yourself, but not the world really.”

Ayton and Cox said they were thankful for their customers who have dutifully stuck with them and filled their homes with stacks of fiction during the pandemic, though they admitted there’s still been a hearty dose of in-store purchasing centered on actions we do in the real world.

Cox, for example, said 32 Books has been selling a lot of puzzles over the last many months. And for Ayton, Booklovers has been a haven for lovers of fiction this year – in addition to those giving bread-making and baking a go for the first time as well.

“I sold more jam and jelly preserve books than I have in the past 12 years I’ve been here,” she said.