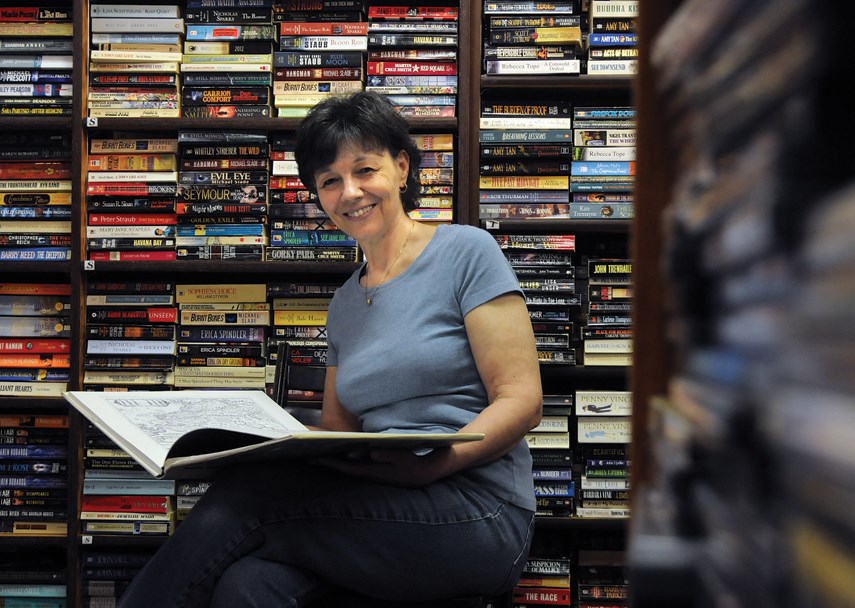 These books are ready for their close-up.

A charming tidbit about Booklovers in Lower Lonsdale: When owner Dalyce Ayton isn’t stocking her used bookstore on Third Street with a varied cornucopia of tomes, classic magazines, and other memorabilia that harken back to a more tactile, more analog moment, she’s renting them out for guest appearances on the big screen.

“I just think it’s really neat,” Ayton says when asked what it’s like seeing her books sharing screentime in productions like Santa Buddies, The X-Files, or The Good Doctor.

“Sometimes I rent out 100 linear feet – well that’s like 33 three-foot shelves. Smaller bookstores wouldn’t be able to lose that kind of stock, sometimes I rent them for two or three weeks.”

When Ayton purchased the long-standing used bookstore 10 years ago it was the realization of her lifelong dream, she notes.

“I always wanted to own a used bookstore,” she explains, relaying a story about how as a child she visited one to buy magazines to cut up for a school project only to become enamoured with the splendour of seeing walls and walls covered with books, magazines, and literature for all ages.

“I just fell in love with the whole concept of piles of books and all shapes and all sizes and types,” she says. “I just love it, I just thought it was magical.”

Ayton worked as a wholesale buyer in the food industry for more than 30 years before pulling the trigger and realizing her dream with Booklovers.

At almost 2,000 square feet, the store provides ample space for readers to get lost in words as they peruse row after row of Ayton’s tightly organized stock.

“I have a lot right now because of what’s going on on the North Shore with everybody selling and downsizing,” she admits. “A lot of people are getting rid of their books because they don’t have the space in their new place.”

During the past decade, however, Ayton has gotten creative when it comes to managing her high volume of stock and renting or selling books to film or TV productions that need them for certain scenes, either as one-offs or recurring segments.

Things can get especially hectic, she says, during pilot season – when hordes of productions hope to cross the threshold of mere concept into the golden realm of reality: being picked up for syndication.

It’s during this time where it might be common for set decorators to be among the loyal and devoted customers who pay regular visits to Booklovers.

“They phone me and say: ‘I need 10 linear feet. I’m doing a house, I need three feet of children’s books ages six to eight, I need two feet of cookbooks, I need four feet of contemporary novels hardcover, dust jackets on or off,” she explains, adding that productions like the epic fantasy shows The Magicians and Once Upon a Time rank among shows that have tasked her with providing libraries for use on their productions.

Ten years ago, when the keys to Booklovers were first handed over to Ayton, she wasn’t aware that such a seemingly eccentric task could be part of her business. She was in the book business after all – the television and film industry was something else entirely.

But a year into owning and operating the store, a set decorator walked in and asked her to put some books together for a production they were working on.

“I’ve been doing it ever since, I do more and more all the time,” she says.

Ayton stresses, however, that while renting/selling books to the film industry is the gravy to her business, the bread and butter -- the bulk of it – comes from her regular everyday customers, the people who make it all worthwhile.

“You think: ‘Where’s it been? Has it been around the world? Who owned it? Who touched this book?’” she ponders about the books that line her shelves.

Regarding her customers, some of whom grace her store every week, some of whom she’s known for the better part of a generation: “If next year all the shows don’t need books, I’ve got my customers,” she says. “It’s the people. ... The best part is the people, for sure.”

Learn how to make traditional Irish soda bread at this year's CelticFest Vancouver
Mar 1, 2021 8:10 AM