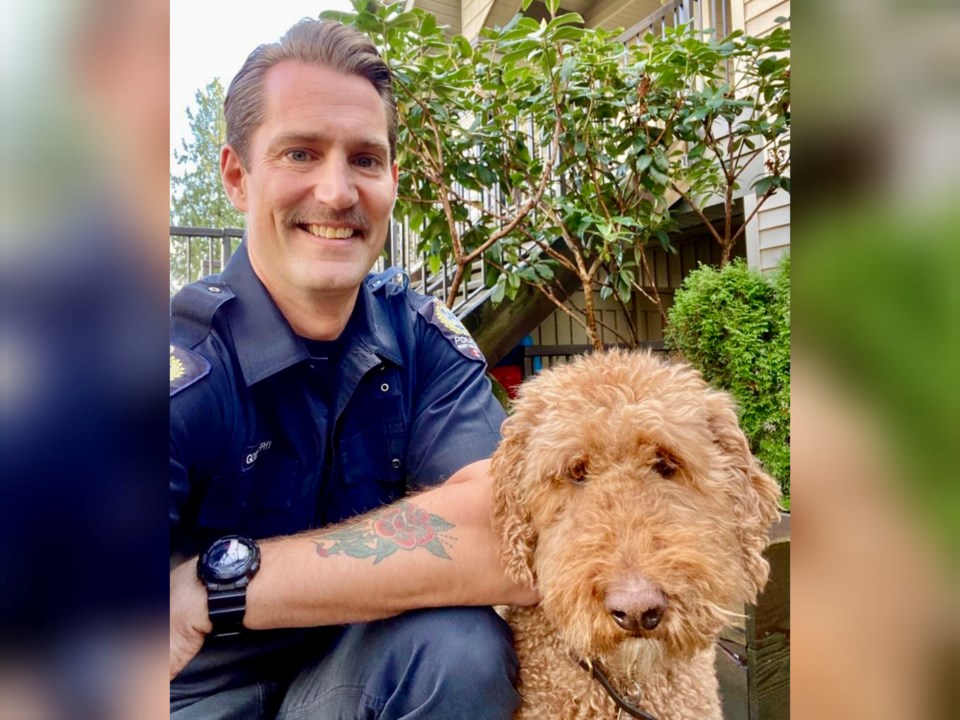 West Vancouver police Const. Kevin Goodmurphy was out for an early-morning walk with family dog Abbey in his North Van neighbourhood when he spotted suspicious activity and called it in to RCMP, leading to the arrest of two men with stolen property. photo North Vancouver RCMP

An off-duty cop's quick reactions to witnessing suspicious behaviour in his neighbourhood have helped take a couple of “bad guys” off the streets of North Vancouver.

Const. Kevin Goodmurphy, West Vancouver Police Department communications officer, said he was out walking his pooch Abbey near his home around 5 a.m. yesterday when he noticed two people “skulking around someone’s property."

"Two people pulling a red wagon full of property in a residential neighbourhood at 5 in the morning? To me, it was the definition of 'out of place,'" said Goodmurphy in a release by North Vancouver RCMP.

1/2 Shout out to @nvanrcmp who helped me catch bad guys this morning when I was off duty! I was out walking the pooch at 5am and noticed 2 people skulking around someone’s property. I called the RCMP who dispatched an officer. Before the officer arrived... pic.twitter.com/YamRIMfhcT

Following his instincts, Goodmurphy called North Vancouver RCMP on 911, to report the behaviour he was seeing and they dispatched an officer. Before the RCMP officer arrived, Goodmurphy watched the suspects allegedly “stash a load of stolen property in a bush.”

He said when the officer showed up, he located the suspects allegedly “riding fresh stolen bicycles, and in possession of more stolen property.”

"While patrolling the area, the officer located two people, one male and one female, matching the descriptions provided by Const. Goodmurphy," he said in a release.

He said the pair were riding two high-end bicycles when they were stopped by the officer, and at least one of the bicycles was later discovered to have been stolen during a burglary in the neighbourhood a few hours earlier.

2/2 ...I watched the suspects stash a load of stolen property in a bush. Once the officer showed up, he was able to locate them, now riding fresh stolen bicycles, and in possession of more stolen property. Both arrested and charged.

DeVries said a 31-year-old man was arrested and held on an outstanding warrant, and charges are being considered for the other offences.

He thanked Goodmurphy for his efforts to help the RCMP.

"Cst. Goodmurphy wasn't in uniform, so he wasn't equipped to safely deal with a pair of burglars the way he would be while on duty," DeVries said.

"He did exactly what we ask everyone in the community to do when they see something suspicious. He observed and reported what he saw, and he stayed safe."

Meanwhile, Goodmurphy was just happy to do his part to help, taking to Twitter yesterday to commend the North Vancouver RCMP's swift efforts.

"Shout out to @nvanrcmp who helped me catch bad guys this morning when I was off duty!” he wrote on Twitter to his 2,385 followers.

"As a North Vancouver resident, I want to say thank you @nvanrcmp for helping to keep our community safe (Even though I helped a teeny tiny bit with this one)."