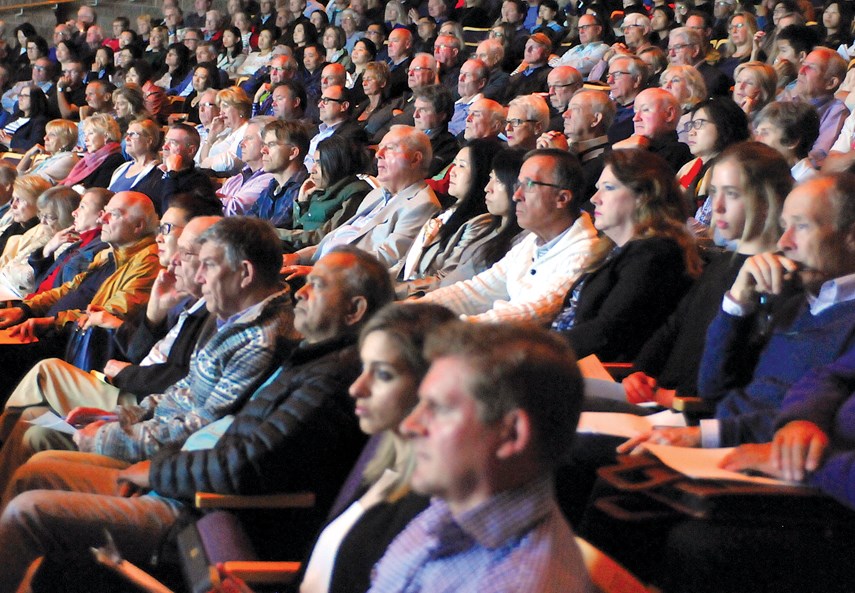 What was supposed to be a non-political town hall Thursday evening in West Vancouver took on angry, political overtones as the near-capacity Kay Meek crowd blasted the NDP’s forthcoming school tax.

The school tax, which many attendees dubbed an asset tax, would hike fees by 0.2 per cent on properties valued at more than $3 million and 0.4 per cent on homes assessed at more than $4 million. The tax also applies to strata condos and most vacant land.

Noting the flagging real estate market and the plethora of homes selling for less than assessed value, Realtor Allan Angell dubbed the situation: “a nightmare.”

“The NDP should be shot,” he said, before being interrupted by applause and shouts of “hear, hear!”

There were 2,833 residential sales in May, the lowest total since 2001, according to the Real Estate Board of Greater Vancouver. Benchmark prices were up 8.7 per cent in North Vancouver and 0.3 per cent in West Vancouver compared to the same period in 2017.

Sager introduced the CPA by noting Morton’s stint working for a big bank and foreclosing on homes when interest rates zoomed to 20 per cent.

The tax seems less about policy and more about generating revenue, Morton said.

Morton noted that some homeowners will be forced to defer the tax, which will accumulate even though property values might dip.

“It’s really sad when our own government says: ‘We don’t care about whether or not you (face) hardship or not, you can just defer,” she said.

Homeowners can only defer taxes on their principal residence if they are 55 or older or are supporting children.

The taxes will have a “trickle-down effect” on baristas and recent university graduates, Loren predicted.

“Employers are no longer going to give the raises that they used to,” she said.

Support for the tax is ultimately misguided, according to retired MacMillan Bloedel executive and former council candidate Jim Finkbeiner.

“If I was a young person outside of the housing market, can’t rent, can’t live here, I’d be upset, too,” he said. “The government doesn’t have the solution for affordability. They’re the enemy.”

Point Grey resident and fund manager Matt Wood called the NDP “the most extreme government” ever to take office in B.C.

“All my co-revolutionists on the West Side would rather just go to our jobs and make money, but we realize our tax freedom day is probably moving closer to November,” he said, noting that in B.C., “the activists have become the establishment.”

“You never got a thank-you, you got a bleep-bleep-bleep-you. That’s not fair,” he said, drawing thunderous applause.

The tax will create many unintended victims, according to Wood.

“It’s not going to affect me,” he said. “I know you want to get me because you don’t like me, but your fake school tax doesn’t hurt me at all. It just cost the B.C. hospitals and schools because I just cut out my charitable contributions.”

The tax will likely take $50 million out of West Vancouver, according to a speech from vacationing West Vancouver Mayor Michael Smith, which was read by Coun. Christine Cassidy.

West Vancouver may be forced to raise property taxes or cut services, according to Smith, who called the tax unfair and unethical.

The tax is expected to apply to 7,059 homes in West Vancouver, according to municipal staff. For a home assessed at $3.5 million, the homeowners will be on the hook for an extra $1,000 annually, an increase of nearly 35 per cent. The school tax will jump by more than 60 per cent for the owner of a $4-million home, saddling them with an estimated bill of $5,271.

Sager introduced Simon Fraser University professor Andrey Pavlov by noting he left Bulgaria to escape socialism, which drew laughter from many in the crowd. Besides working as a professor of finance, Pavlov also worked on Wall Street on mortgage-backed securities, “another period we don’t want to circle back to,” Sager added.

“If you’re a buyer, the fact that the home price is cheaper does nothing to help you.”

Fellow panellist Seain Conover concurred, addressing the argument that homeowners were only being asked to pay “a little bit” more.

“That’s a very disingenuous argument because when you pile on a whole bunch of expenses to an asset, the asset becomes less desirable,” he said.

The courtroom may be the best venue to fight the tax, according to Canadian Constitution Foundation director Claus Jensen.

Jensen asked for $5,000 in donations to seek a legal opinion to investigate what he called: “a very remote possibility that the provincial government can in fact, not tax wealth.”

West Vancouver-Sea to Sky MLA Jordan Sturdy ended the evening by urging the crowd to organize and oppose the NDP’s move to proportional representation, which he said could usher in a succession of centre-left governments.

While many expressed frustration, Sager reminded the crowd about the successful 1990s campaign opposing an NDP-introduced luxury tax.

“People thought, ‘Oh, nobody’s going to care about West Vancouver and the West Side of Vancouver – that little pocket of all those wealthy homeowners,” Sager said. “We went to small towns all around this province and I’ll tell you something: people do care. They care when something is fundamentally unfair.”

This article has been amended to clarify the school tax rates.

Ledingham McAllister’s Sydney will be the new face of luxury urban living in West Coquitlam
May 14, 2021 8:00 AM