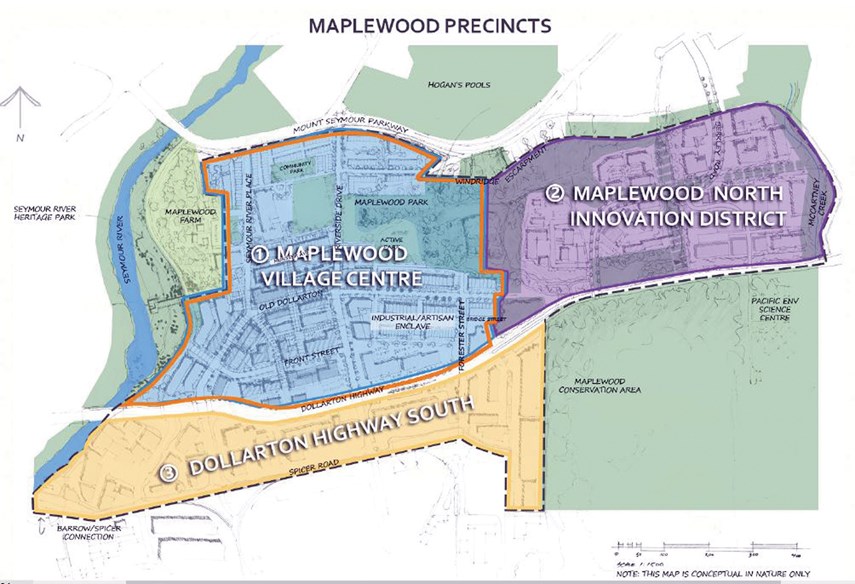 The last of the district’s major town centres to advance, Maplewood Village is envisioned as 1,500 condo and townhouse units nestled among a wide swath of bustling light-industrial land between Dollarton Highway and Mt. Seymour Parkway.

Given the area’s recurring traffic jams, adding density to Maplewood is akin to inviting guests to a house without chairs, according to Coun. Jim Hanson.

“Once we’ve started to address our transportation issues – at least have a plan – that’s when we would turn our minds to bringing more people into the community in this location,” Hanson said.

The best transportation plan is a good land use plan, countered Coun. Mathew Bond, adding there is a strong indication a B-line bus will be routed through Maplewood.

Mayor Richard Walton made a similar argument, suggesting that failing to advance Maplewood Village could immeasurably delay the district’s chances of getting additional transit in Seymour. It’s critical to make it clear to transit planners that a mass of people are coming to Maplewood, he said.

While Coun. Lisa Muri supported pushing the project forward, she cautioned that new mid-rise towers would not result in affordable housing.

The district should concentrate multi-family housing on the eastern portion of Riverside Drive, Muri contended, stressing the need to create job opportunities and house the district’s missing generation. In that regard, the western reach of the Maplewood plan is a “lost opportunity,” she said.

Bond differed, accusing some of his colleagues of “cognitive dissonance.”

“I find it very interesting that the members of this council that are some of the most passionate advocates for affordable non-market housing are voting against the plan that delivers the most non-market housing that we can potentially have in the district,” Bond said.

Once complete, Maplewood Village is set to include 550 non-market rental units, more than doubling the current supply of 250 lower-end units, all of which would be redeveloped.

However, some of the area’s housing will be directly above light-industrial operations, setting up a conflict between residents and industry, warned Coun. Roger Bassam. “Don’t create the conflict,” he advised. “Ultimately that conflict will result in industrial being forced out by residents, such is the nature of our democracy that people get to vote and businesses don’t.”

The only spot where that conflict might be averted is in the Innovation District, which is set to include 900 units, half of which would be reserved for employees in the tech-centric district.

However, in those developments where stratified residential units are stacked atop light-industrial businesses a clash is inevitable, according to Bassam.

Coun. Robin Hicks suggested the homes would be “relatively affordable,” and that the district had settled on the right mix of residential and light industrial. While there are problems with the plan, it’s still subject to public hearings and community input, said Coun. Doug MacKay-Dunn.

Council’s decision to amend the OCP was a “historic vote,” according to Walton, who recalled discussing Maplewood when he was elected mayor in 2005.