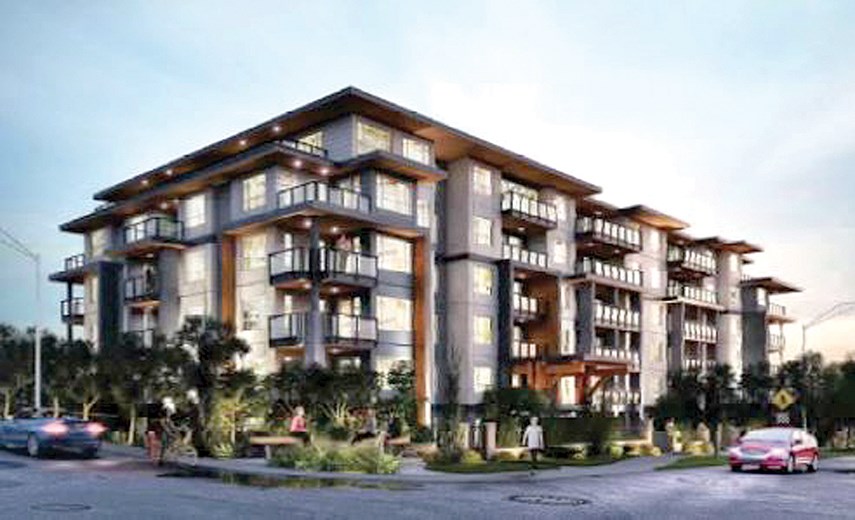 City of North Vancouver council voted to move ahead with a density-doubling development on Chesterfield Avenue Jan. 22 after the project won support from two tenants of the building set to be demolished.

“I fully support the whole idea of replacing the building because it’s at the end of its life,” said Dianna Allen, who introduced herself as a longtime resident of the 40-year-old low-rise.

While she has concerns about where she’ll live during construction and qualms about what the new rents might be, Allen still favoured the redevelopment.

“All things being equal, there (have) to be places to rent that . . . people can live in and be comfortable in and afford.”

The project was vociferously opposed by Richard Warnes, the president of Tudor Court Apartments, located across a laneway at 145 West 18th St.

The 54-foot high building will “dominate the skyline above Tudor Court, blocking valuable sunlight, reducing privacy and views,” Warnes wrote in a letter to council.

Tudor Court suites have already dropped in value, according to Warnes.

The project includes nine units set to be offered for 10 per cent below average rates established by the Canada Housing and Mortgage Corporation. That would translate to studio apartments rented out at about $900 and one-bedroom apartments offered at a little more than $1,000, according to Josh MacLean of West Vancouver-based developer MacLean Homes. The 10 per cent discount is scheduled to lapse after 10 years.

While some tenants will benefit from the affordable units, the project is unfair according to Warnes, who argued it is “neither reasonable nor fair – that so much must be given up by so many to so few.”

MacLean Homes offered the nine affordable units in exchange for a boost in floor space ratio from 1.6 to 2.54 – the ratio measures the project’s total floor space against its lot size.

If the city had insisted on a cash contribution MacLean Homes would have paid the City of North Vancouver approximately $2.88 million.

Other neighbours attacked the project for its lack of parking, which they predicted would exacerbate an already-challenging hunt for spots.

The development is slated to include 56 underground parking spots, including nine stalls reserved for visitors.

“To say that people don’t have cars is a fantasy,” she said.

That argument passed muster with Coun. Holly Back, who voted against the project largely based on the project’s big footprint and small number of parking stalls.

“It just doesn’t fit in the area,” she concluded.

Coun. Linda Buchanan defended the city’s policy, which she argued was crucial for mid-market apartments.

“When we demand that we have more parking for purpose rental building, we are obliterating affordability because we are only adding that cost to the renter.”

“Most of the time it’s a better community than they thought it was going to be.”

If council were to raise taxes 10 per cent – a move Mussatto noted would likely cost every councillor their job – that would only yield enough to buy 10 units, the mayor noted.

Rezonings are “one of the very few things we can do” to encourage affordable housing in the city, Mussatto said.

While she was conflicted over whether the buildings current tenants would return, Coun. Pam Bookham supported the project while reminding council of the need to provide parking and transportation.

“We know that our transit isn’t adequate. We’re building faster than transit is responding,” she said.

Coun. Rod Clark also approved the project, noting that while the building’s height is: “a problem for the neighbourhood . . . it’s not particularly a problem for me.”

City council could insist on a shorter building with plentiful parking and more affordable units, Coun. Craig Keating suggested, but that would be a mistake.

“Those conditions . . . would absolutely ensure that nothing got built at this site.”

The developer could have built a three-storey strata on the site, pocket a sizable return on investment and sidestep the city’s rezoning process entirely, Keating said. This project includes trade-offs for the city that are reasonable, Keating said.

Council approved the project 5-2 with Couns. Back and Bell opposed.