MOVE ON: Can we please get some more sidewalks in North and West Vancouver Districts?

These small improvements would make a big difference for pedestrians on the North Shore
Jan 17, 2021 9:00 AM By: Heather Drugge 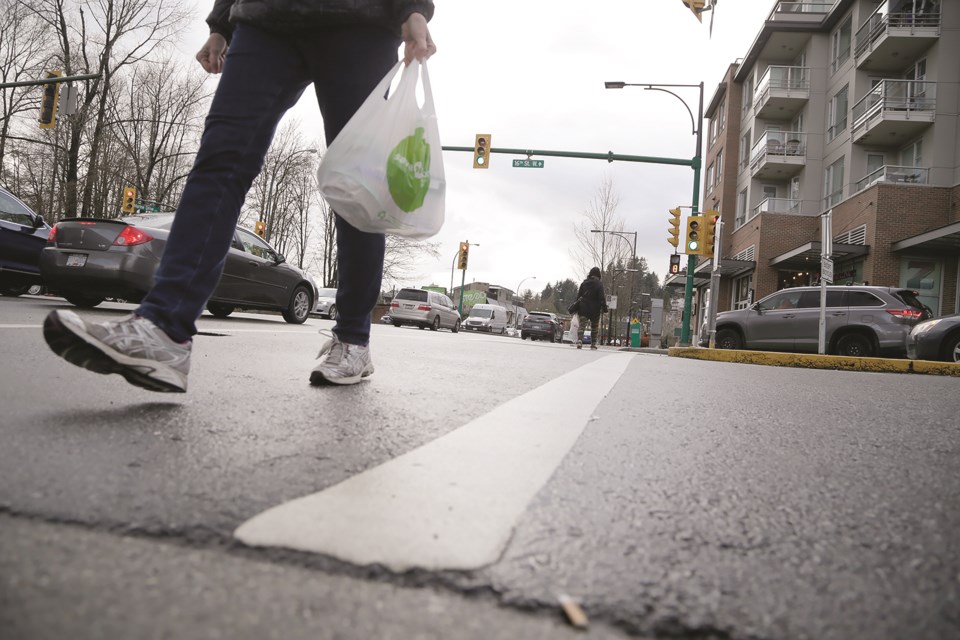 During the pandemic, walking has become a bigger pastime than ever.

A person can only watch so many episodes of The Crown. The political drama down south is also spellbinding, but again how much fake news can a person handle? If fake news and British dramas pin you to the couch, think about the reality-induced adrenalin rush of putting on outdoor clothes (no more jam-jams), opening the door, and stepping off the front porch into the world. I know. It’s a big step. But a lot of us are walking more, and it is not just people with rescue dogs from Mexico.

As COVID time goes on and on and on, I’ve noticed some things that might improve our walking experience here on the North Shore.

For starters, how about we put in some sidewalks? Is the City of North Vancouver the only place where people thought, “Hey, we should build these sidewalk things, they might catch on?” There are woefully few sidewalks in the Districts of North and West Vancouver.

The District of West Vancouver’s 2017 Pedestrian Network Study identifies that only half of all arterial (this means busy) streets have sidewalks. Council approved a plan for sidewalks on high-priority routes, including Queens, Keith Road, Mathers, Burley and Marine Drive west. I also know that Bellevue’s COVID-related slow street experiment prompted a community petition to make those changes permanent. Yay to residents taking action for pedestrians.

In the District of North Vancouver, I remember walking to elementary school up Clements to Ranger and then along Ranger to where the sidewalk begins at the big bend. We all felt SO MUCH better when we reached the sidewalk. I was seven. Not much has changed up there, but now I wonder how that sidewalk ever got built.

At least in the DNV, you can look up where they will build sidewalks. The 2009 North Vancouver Pedestrian Master Plan prioritizes streets for sidewalks. The number-one ranked corridor at that time was Riverside Drive between Mount Seymour Parkway and Old Dollarton. The district recently completed this segment with a new east-side multi-use path. The next two priority routes, Seymour Boulevard and Welch Street, have also been constructed. Planning does help.

The City of North Vancouver has a Pedestrian Plan Framework, which doesn’t identify streets for sidewalks, presumably because most already have them. They are looking to enhance their already extensive network. The 2019 framework describes ways to make walking safer and more comfortable as well as promoting walking to achieve broader environmental and health objectives. The City’s two-meter sidewalk width standard results in fabulously roomy sidewalks. A dog walker, a person on a mobility device, or with a baby stroller and another person can pass with ample space (during normal times).

Sidewalks aside, there are also long blocks on busy streets without enough crosswalks. It can feel like taking your life in your hands just to cross a street like First Street down by the Rona, or the block on 3rd Street between Chesterfield and Lonsdale, or Queens between Edgemont Village and Lonsdale, or 23rd Street. And just forget crossing lower Capilano Road or Mount Seymour Parkway. A few more crossings and pedestrian islands would help. The District of North Vancouver publishes a list of upcoming and identified crosswalks. You can also write in to recommend a new crossing.

Though rarer, there are also plant-based impediments to walking. We need an honest discussion about laurel hedges. This is especially true if you live on a corner, where an overgrown bush reduces the site lines for both pedestrians and drivers alike. Even some well-trimmed plants impair site lines at crossroads because they are too close to the road. These, unfortunately, require removal altogether. My partner has threatened to create a robotic boulevard trimming machine that would travel up and down streets shearing off branches at a set distance from the curb edge. Though I am customarily dubious of his “inventions,” this one could be a boon to society.

Walking is a great way to get from A to B. It’s free and takes little toll on the body while keeping us healthy. Humans do emit greenhouse gases as we ambulate, but the environmental benefits of walking in contrast to driving are great. Taking a stroll also creates opportunities for mini social interactions. A smile, a nod, a brief chat all build trust, respect, and a sense of co-operation. We need that right now.

Heather Drugge is a sustainable transportation advocate who has used her bike for transportation for over 20 years. She’s zooming around on an e-bike now, and maybe looking at a jetpack next. Northshoremoves@gmail.com.