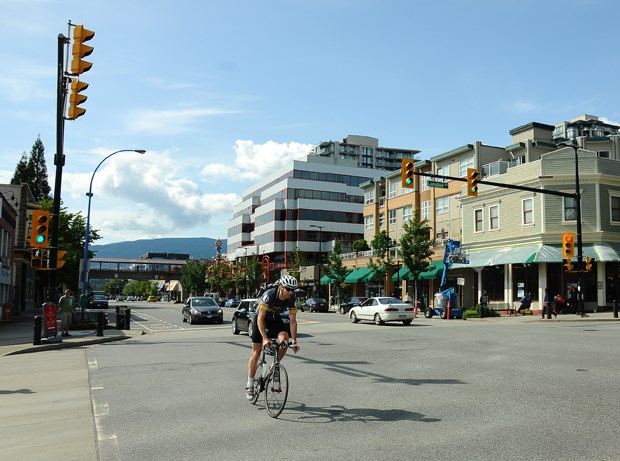 The City of North Vancouver’s Esplanade corridor is set for a major revamp.

Council voted Oct. 5 to begin work on the Esplanade Complete Street Project, which is intended to make better use of limited road and sidewalk space between West Third Street and Low Level Road.

“A complete street considers the needs of all people of all ages and abilities, travelling by all modes appropriate to a given context,” said Brandon Green, transportation engineer. "Staff are confident that despite the need to make tradeoffs, a complete street design can be developed to provide a quality experience for all road users.”

After consulting with the Lower Lonsdale BIA, North Vancouver Chamber, TransLink, Vancouver Fraser Port Authority, B.C. Trucking Association, North Vancouver City Fire Deparment and HUB, city staff have deemed the corridor works fairly well for transit, goods movement and people in passenger vehicles. It is, however, not an optimal experience for people on foot, travelling by bike or for local businesses.

Cycling groups have been adamant the street’s bicycle infrastructure must be improved from the current painted bike lanes sandwiched between the road and the curbside parking. In 2019, North Vancouver resident Mike McIntosh was killed in a chain reaction crash that began with a driver opening his door into the bike lane and ended with McIntosh being thrown from his bike under the wheels of a heavy truck.
Apart from that, the bike lanes have been the scene of many near misses and frequent complaints of delivery drivers parking in them. Early consultations have found truckers themselves aren’t keen on the current layout, according to staff.

Council’s support for kicking off the project was unanimous, although Coun. Holly Back signalled she would be very protective of parking out front of businesses.

“That’s a major concern for me, having been in business in Lower Lonsdale. I totally understand the safety concerns for cyclists and everyone else but those businesses are going to suffer hugely,” she said, adding she hopes the Lower Lonsdale BIA will be included in the consultations.

When city staff last did a study on parking in Lower Lonsdale, about eight years ago, they found there was no shortage of parking available in the neighbourhood, although most of it was not the free curbside parking drivers covet.

Mayor Linda Buchanan said the city depends on the Esplanade corridor for a lot of things, and warned that the Complete Street Project will have to balance those many needs.

“This is as a trucking route. We can't take trucking off of this. It's a major road network for TransLink, and we do need to be able to move goods,” she said. “I just want to make sure that when we are engaging with the public that they are very clear on what are the givens for this road – what can change and what can't change. But what we do know is we can make it much better. We can make it safer, and we can make it work better for people and how they're moving about in whatever mode they're moving about.”

The city plans to seek public feedback on the preliminary designs this fall before producing a work plan in the spring of 2021. Construction is tentatively scheduled for summer and fall of next year.

There are no cost estimates yet for the project, but staff say they will seek out any and all grant opportunities from senior levels of government.