The heavily trafficked First and Second streets in the city feel a little safer
Mar 6, 2021 10:05 AM By: North Shore News 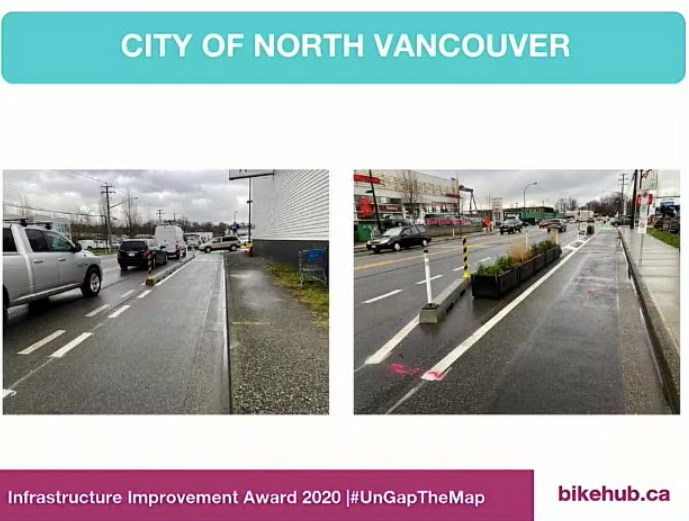 Before and after photos show the bike lane improvements made on West First Street in the City of North Vancouver. HUB Cycling

Congratulations and thanks to the City of North Vancouver. The new protected bike lanes along the heavily trafficked First and Second streets in the city set a North Shore standard for keeping people on bikes safe. Research at the University of British Columbia and elsewhere has found that protected bike lanes are the safest bike facility. They decrease the risk of injury by 90 per cent compared to a major street with no cycling infrastructure.

In 2015 through 2019, ICBC recorded 345 casualty crashes on the North Shore between bikes and motor vehicles. Nearly half of those crashes occurred on significant arterials - Marine Drive, Main Street and those with high curbside activity.

No prize for guessing who comes off worse in such collisions; sadly, seven of those people cycling were, in fact, fatally injured. People walking and cycling who share paths do not fare much better.

Although injuries on multi-use paths are less severe, collision prospects are frequent and often terrifying for people walking and biking, even at slow speeds. The case for separated and protected bike lanes has never been more apparent.
All North Shore municipalities are striving to counteract climate change meaningfully. This requires us to break the habits of a lifetime. It means a shift to cleaner transportation modes like transit and bikes.

Municipalities need to adapt their road transportation networks to facilitate these travel modes.

The First and Second street bikeways show how we can achieve this equitably, efficiently, and inexpensively. Thanks to the City of North Vancouver for raising the bar.

Dangerous bridge over Capilano River to get safety upgrades
Feb 11, 2021 9:01 AM
Comments