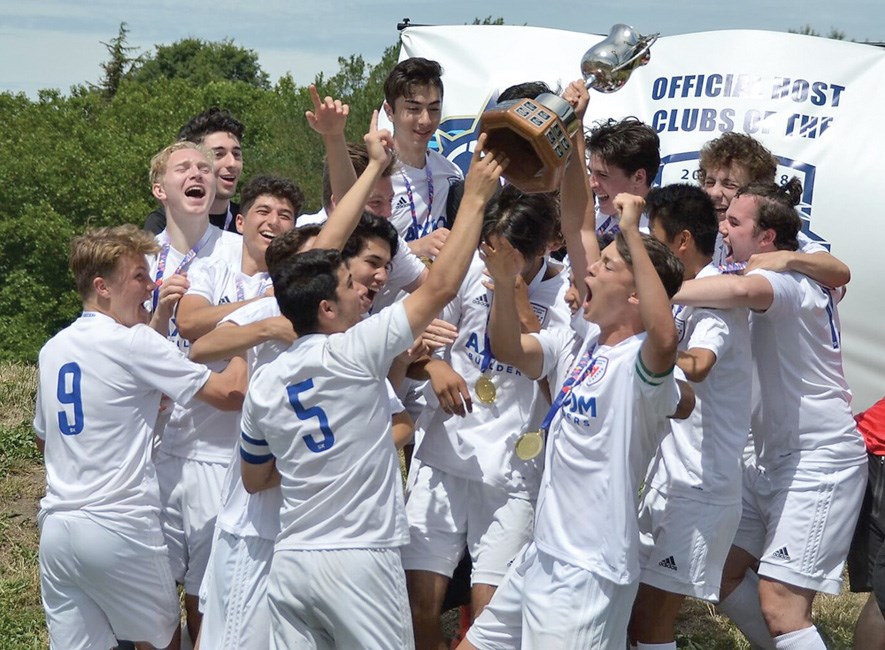 The only problem for West Vancouver Football Club technical director Jammer Afshar as his teams were putting in a historic performance at the BC Soccer A Cup provincials over the weekend in Richmond was that he couldn’t be in two places at once.

The West Van club sent five teams to the Provincial A Cup tournament and came away with three golds and two silvers, a superb result for the smallest of the North Shore’s youth soccer associations. In the end the U18 boys, U14 boys and U14 girls from WVFC all were crowned provincial champions while the U18 and U14 girls earned runner-up status.

“We’ve had one or two teams over the years make it, but five out of 11 Metro teams? This is the first time. Unprecedented,” says Afshar, who has been involved with the club for 19 years. “There’s a good feeling going on at the club right now.”

The action was so heavy that Afshar didn’t know where to look as the drama was unfolding. At one point the U13 boys and U14 girls were both fighting for gold at the same time.

“I left the boys to go and see the girls, that’s when our team scored to win the game 1-0,” Afshar says. “I heard it was a nice goal. … I ran back and ended up watching our goalkeeper, who wasn’t our starting goalkeeper, make an incredible save. Like World Cup level.”

The U18 West Van Rangers ended their youth soccer careers in fine style, going undefeated in the tournament and knocking off the Fraser Valley Selects 3-0 in the final.

“They just followed a perfect plan that they executed to a T,” says Afshar. “Des Tachie, our U18 boys, he’s a hell of a coach. He took the team over to Europe a couple of times in the last two years, exposed them to high-level soccer there. He trained them tactically, the boys were very aware, and technically they were very strong. … It was a great way to graduate the boys out of our youth system.”

The U14 girls, coached by Jackie Steede and Ashley Steede, claimed their second straight provincial title in dominant fashion, going 4-0 in the tournament with a 3-0 win over the Victoria Thunder in the final.

The championship run for the Rangers U14 boys, coached by Kyle Thompson and Samuel Arbeau, was impressive for a number of reasons. Five of the team’s players were not able to attend the tournament as they were on a soccer trip to Europe. The Rangers compensated by calling up players from lower levels and still proceeded to run the table at provincials, going 4-0 at the tournament and claiming the title with a 1-0 win over the Lower Island Surf in the final.

“When the whistle went, the boys were so happy,” says Afshar. “That one was a special one. They had so many of their stars missing but they were organized, they worked hard, they elevated their game and everyone was pleasantly surprised that they ended up winning the championships. … We didn’t skip a beat. It was awesome.”

To top it all off, the U14 boys earned the Fair Play Award in their division.

The U18 girls took home silver, losing 1-0 to a tough Upper Island Riptide team in the final, while the U13 girls finished second after losing 4-1 to CMF Shockwave in the final.

All told, the five West Van teams combined to score 40 goals in the tournament while giving up 21. Afshar said there was great club spirit at the tournament as West Van players and fans stuck around to cheer on their club mates.

“I think we had the loudest crowd,” he says. “West Van presence was great all weekend.”

Afshar chalked up the club’s strong showing to the presence good coaches who have studied the game and taken technical training.

“I just put our coaches in place,” Afshar says about his relatively hands-off style as the club’s technical director. “I just pretty much give them a little bit of direction and then they go off and do their programs. Coaching boys is different than coaching girls. I think we just had everything lined up nicely.”

The club also benefitted from adding some players from other associations. The A Cup is the second highest youth level in the province, just below the eight-team BC Soccer Premier League, and teams are permitted to use players from throughout their districts. West Van FC has sharing agreements with North Van FC and the North Shore Girls Soccer Club, and players from Squamish and Whistler also suited up for West Van FC. The majority of the players, however, come from West Van, says Afshar.

“We’ve been around for quite a while as a club, hosting boys and girls,” he says. “Through some hard work, this is a result of that. … I’m quietly pumping my fists. This is good – it’s a good feeling.”

The North Van FC Selects claimed silver at the tournament, making it to the final where they fell 2-1 to Burnaby District Metro Selects United. The North Shore Girls Soccer Club Renegades earned bronze at the U17 level, topping the Upper Island Storm 2-1 in the consolation final.

The NSGSC also scored a pair of silver medals at the B Cup provincials, making the final at the U13 and U14 levels.