Low, bottom-left corner. That's where Justine Laughren of the Squamish Nation was aiming when she took her shot during the penalty kick shootout at the gold-medal soccer final at the first-ever World Indigenous Games in Brazil earlier this month.
Nov 15, 2015 12:00 AM By: Justin Beddall 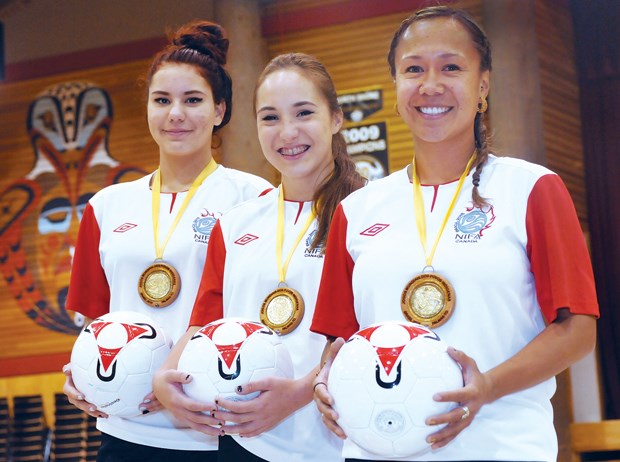 That's where Justine Laughren of the Squamish Nation was aiming when she took her shot during the penalty kick shootout at the gold-medal soccer final at the first-ever World Indigenous Games in Brazil earlier this month.

With 8,000-plus football-crazy fans packed inside Palmas Stadium, the mood was electric as the Canadian women played a hard-fought nil-all regulation draw against host Brazil.

Next came the shootout.

That Laughren was even selected to take the shot was remarkable considering she was the youngest player on the Canadian team, which was made up of 23 First Nations players from across the country.

She'd just turned 16, making her 13 years younger than the oldest player on the team. This was the first trip she'd ever taken without her mom. Fortunately, she had two other teammates also from the Squamish Nation along with her, older sister Crystal, 17, and Lacey Baker, 29, the team's captain and most senior player.

Coach Dano Thorne didn't hesitate to select Justine as a shooter. "I knew she took penalty kicks for her teams, her Squamish (Nation) team and her league team," he said, "so I knew she was pretty good with it."

"It was kind of a big rush," said Justine, adding that she never figured she'd get the nod to take such a big shot in an international game.

The Carson Graham student admits playing in front of a boisterous, partisan crowd tested her.

"Oh my goodness, it was nerve-racking," she said. When she approached the line for her shootout attempt she was greeted by boos.

"There were about 10,000 (fans), the girls were mentally tough when they shot. The composure by our younger players was outstanding," said Thorne. Justine didn't disappoint, scoring low, bottom-left corner and helping to lift the Canadian team to a 3-1 gold-medal victory.

Penalty kicks have always kind of been Justine's thing. She has yet to miss one. "I hope to keep it going," she said.

She practises her shot a lot, both with her club teams and at the park with her sister. Rather than trying to pound the ball top-shelf, Justine likes to shoot low, especially when she's under a lot of pressure.

"Before I used to get super nervous. Now I'm confident with my ground shots."

Her sister Crystal was also a big contributor to the Canadian side. The fact that she's even playing high-calibre soccer is somewhat of a miracle considering that by age two she'd already undergone several surgeries just to enable her to walk properly. But now she's a speedy dynamo on the pitch, and she tallied three goals at the games.

"Crystal played very well," said Thorne. And while capturing gold in a hostile stadium is an indelible memory, it's not the only thing the players brought home.

"It was amazing to represent my aboriginal community and meeting new people and learning about new cultures," Crystal said. But it wasn't just learning about cultures from places like Peru, Colombia and the United States, they also learned about the different aboriginal cultures on the team made up from players across Canada.

"(We) came together and we talked about our cultures with one another and understood one another," added Crystal. Crystal was happy to have Lacey Baker on the team. "She's always been my inspiration for soccer; she's such a good player."

"She was strong as the captain of the team, her leadership was endless. She was the right choice. She was the oldest but she can keep up with the youngsters."

Thorne agreed that the two-week trip was about much more than soccer.

"First thing is the cultural identity. Being proud and understanding other cultures, similarities, and the challenges that we have in our indigenous world around the world," he said. "The players really bonded with each other."

Baker said the atmosphere at the games was something she'll never forget. "Being surrounded by 24 indigenous cultures and winning the gold. Being booed by 8,000-plus fans and just having everything against you.. . then going into shootouts watching our team stay together, play strong and overcome all of it and then have that gold put over your neck, it was just amazing."

When she watched Justine take her shot she was confident, having played with the youngster for the past three years on a Squamish Nation team that participates in all-native tournaments. "She's a finisher. She places, she's a smart young player. She has great soccer smarts for such a young woman."

Baker said she is not usually a "super emotional" person but when the gold medal was draped around her neck, "I literally just broke into tears."