Ruby ready to shine for Canada 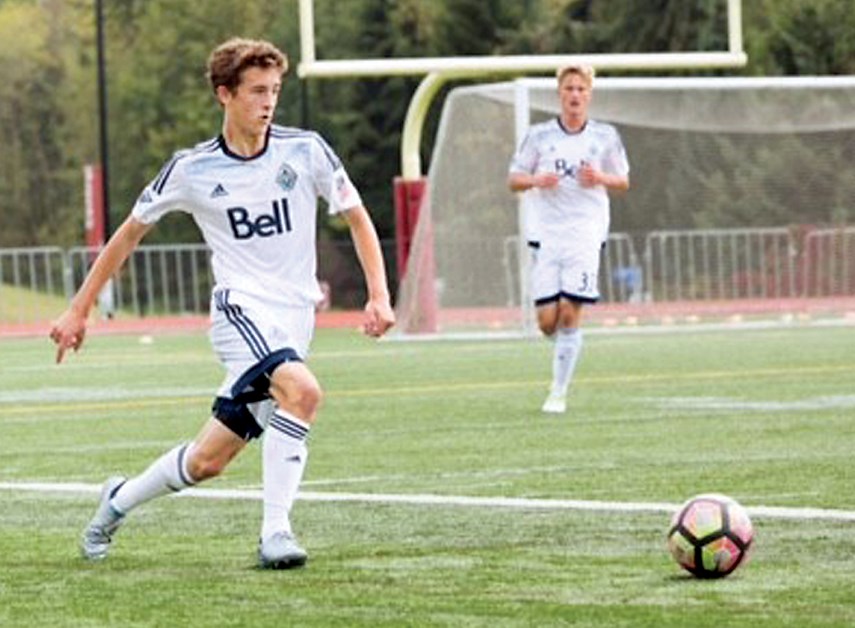 Jake Ruby makes a play for the Whitecaps youth team. The North Van soccer star is in Panama for the CONCACAF Under-17 Championships this week, hoping to help Canada qualify for the 2017 FIFA U17 World Cup. photo Emilie Rauschuetz/Vancouver Whitecaps FC

As far as first impressions go, they don’t get much better than the one made by North Vancouver’s Jake Ruby in his debut with Canada’s national U17 soccer team.

Ruby first suited up for Team Canada last November in an exhibition match in Kingston, Jamaica, and the team must have been pleased with what they saw from their new right fullback – Ruby was named Man of the Match as Canada dispatched the host team 3-1.

“It was the best feeling ever, so cool,” he said of sporting a Maple Leaf on his jersey for the first time. “I was having so much fun that game. The adrenaline was pumping.”

The stakes will be even higher this week as Ruby and the rest of the Canadian boys are in Panama fighting for the chance to live a soccer dream: playing in a World Cup. The 2017 CONCACAF Men’s Under-17 Championship runs April 21 to May 7 at the Estadio Marcana de Panama.

Teams from 12 countries – including powerhouse squads from the United States and Mexico – will be vying for four berths in the 2017 FIFA U17 World Cup scheduled for October in India.

“It would be one of the best feelings ever,” Ruby said of what it would feel like to suit up in a World Cup. “Especially in that kind of environment, the fans and stuff. It would be so cool.”

Ruby has already packed a lot of excitement into his short soccer career. He started at age seven with the Lynn Valley Soccer Association and then North Vancouver FC before bumping up to Mountain United in the BC Soccer Premier League. Ruby now gets daily action in the Whitecaps residency program where he caught the attention of the national team, earning an invite to a Canadian U17 camp last fall.

Ruby was a multi-sport star, playing hockey, lacrosse, basketball and volleyball, before soccer took over his life when he joined Mountain United.

“I played a ton of sports. I just love sports. But soccer is the main one,” he said. “It’s just the speed of play, I love playing on the ball. It’s so much fun.”

Soccer specialization has put him on the move lately, as he has bumped from Argyle Secondary over to Burnaby Central where the Whitecaps residency program is headquartered. The budding soccer stars will move once again next year when the Whitecaps centralize their training program at a UBC facility, moving the youth players to University Hill Secondary.

“It’s a sacrifice, but it’s totally worth it,” Ruby said of the nomadic soccer life he lives. He’s hoping the hard work will pay off down the road with promotion to the Whitecaps first team and the senior men’s national team program. First, however, he’ll be guarding the backline in Panama. Canada opens the CONCACAF tournament on Saturday against Costa Rica before facing Cuba April 25 and Suriname April 28. The final is scheduled for Sunday, May 7.

When Canada hits the pitch Ruby will be intent on working both sides of the ball.

“Keeping a clean sheet is the biggest part, but from my position at right fullback I want to be up and down the wing at all times, getting crosses in and winning my one-on-one battles,” he said. “I think we have a very good chance of making it through. … We need to stick together, play as a team, keep it strong at the back but also get our attacking game strong up front and score goals.”