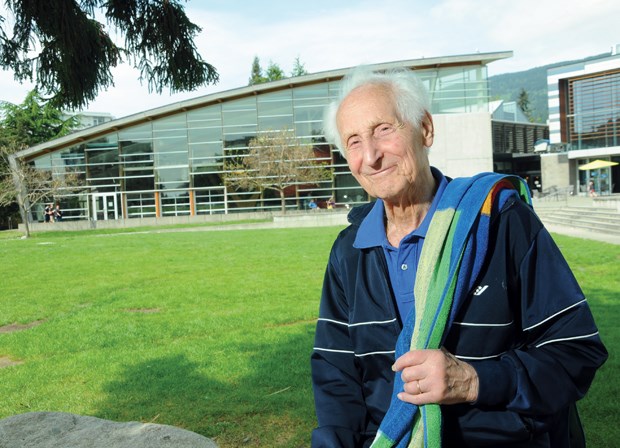 Taking in a local seniors swimming competition as a spectator some 10 years ago, West Vancouver’s Fred Schulhof came to a life-changing conclusion.

In that moment, Schulhof (a life-long swimmer who competed during his university days in Ireland, though backed off from competitive swimming in the years that followed due to life, work and family taking precedence), decided the timing was right for him to get back into the pool and see how his swimming prowess stacked up against others in his age group.

In the last 10 years, the athlete and North Shore Masters Swim Club member has racked up 32 Canadian records. In addition, in January 2014, at age 94, he set two age-group world records in the 200-metre backstroke and 100-m backstroke at the Nanaimo Ebbtides Masters Swim Meet.

“You look at somebody like that and the other older swimmers, they’re just an inspiration to anybody to keep active. It’s inspirational to watch somebody his age still competing,” says Linda Sullivan, president of the North Shore Aquatics Society.

This weekend, Schulhof will be among 31 North Shore Masters Swim Club members and 238 masters swimmers from across B.C., Alberta, Saskatchewan, Ontario, Washington, Oregon, as well as France gathering for the Masters Swimming Association of B.C. Provincial Swimming Championships. The meet gets underway today and will run through Sunday (April 22-24) at Richmond’s Watermania. “It really speaks to the dedication of these people who are seniors and who put in so much time. Those people train almost every day in pools on the North Shore. It’s pretty amazing what they do. You think of people who are athletic as being in their 30s and 40s and these guys as you can tell are quite a bit older,” says Sullivan.

The North Shore Aquatics Society is hosting the provincial swimming championships for the first time along with the North Shore Masters Swim Club.

“We have two main goals, one is to support local clubs, the other one is to try and support the process of getting a 50-metre pool built in North Vancouver,” says Sullivan, of the society.

While the North Shore groups are hosting this weekend’s meet, they’re forced to hold it in Richmond due to the lack of an adequate local facility, something the society is working to change. “It is an ongoing frustration because North Shore clubs cannot host anything on the North Shore - that includes water polo, it includes diving, it includes synchronized swimming,” says Sullivan.

Schulhof, the oldest competitor at this weekend’s meet, open to swimmers 19 and over, will be competing in three events, 50-m breaststroke, 50-m backstroke and 100-m backstroke.

“They’re my fortes at the moment,” he says.

Reached Thursday by the North Shore News, Schulhof was excited for provincials. “I’m never ready but I look forward to it. It’s really good people to be with, it’s really enjoyable. It’s not just a competition, it’s the camaraderie,” he says.

When asked how often he can typically be found practising at the West Vancouver Aquatic Centre, Schulhof offers a rather sheepish reply.

“I should be practising at least every second day but I usually swim once a week or sometimes once in two weeks,” he says.

Schulhof encourages his peers to likewise engage in the activity, no matter what their age.

“If you like swimming, keep going, it’s good for you,” he says.